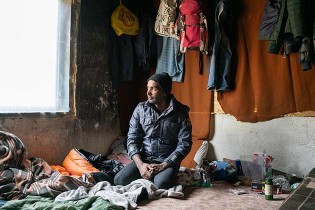 By Sara Perria
Responding to several shouts Viraj emerges from the ruins of his shelter in northwest Bosnia. He is originally from India but is now squatting near Bihać in what remains of a house abandoned since the 1990s Balkans war.