Supported by the European Journalism Centre* 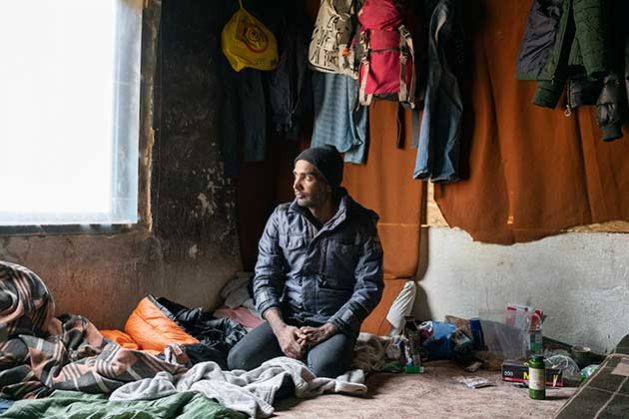 Viraj from India, in a squat where he has been living for three months near Velika Kladusa, Bosnia. He hopes to join family in Italy. February 2022. Credit: Chiara Luxardo

Bihać, Bosnia, Apr 19 2022 (IPS) - Responding to several shouts Viraj emerges from the ruins of his shelter in northwest Bosnia. He is originally from India but is now squatting near Bihać in what remains of a house abandoned since the 1990s Balkans war.

“I was in the bathroom,” says Viraj – although there is no such facility. The building doesn’t even have windows, just gaps exposed to a freezing wind. Collapsing walls are patched with planks. Steps leading up from the road that are not missing shake under the weight of the few people venturing there.

“It’s just us living here now,” adds Sidar, an Iraqi in his late 30s. “We prefer to stay here. People come and go, but we’ll stay until it’s a good moment to cross.”

The two men are among some 2,000 or so migrants waiting for the opportunity to play the so-called ‘game’: the hazardous challenge of evading Croatian police on the nearby border and entering their goal of the European Union, illegally. They often need several attempts to succeed. Many prefer to squat closer to the border for months until spring offers an easier route across mountains.

A long day’s walk away, basic services, health facilities and food are provided in camps for migrants managed by Bosnia and the UN. Yet hundreds like Viraj and Sidar have opted instead for abandoned houses, warehouses and factories fallen into disuse, or skeletons of unfinished buildings surrounded by trash, with open toilets and improvised kitchens. Away from the headlines, they also exist mostly under the radar of humanitarian agencies.

“There are too many migrants in the camps,” says Sidar, citing issues with drug dealers, violence and lack of freedom there. “We can go in and out of this house when we want. In the camps we only have a couple of hours, then we have to go back. There’s more freedom here.” 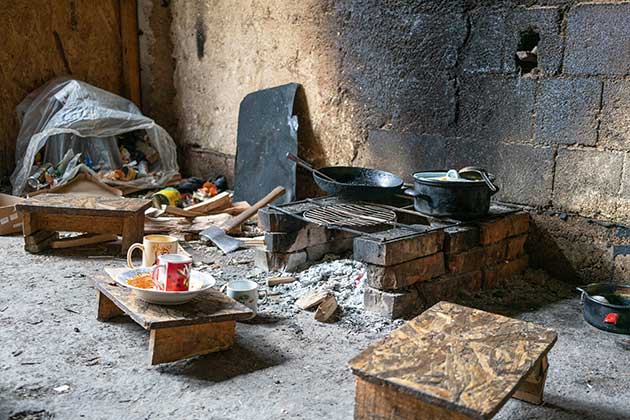 The kitchen of a squat near Bihać, Bosnia. February 2022. Credit: Chiara Luxardo

Life is a long wait for this migrant population transiting Bosnia. “I get up, eat something and watch a movie,” says Viraj. “Bollywood movies or action movies like Fast and Furious 5.”

According to the International Organization for Migration (IOM), very few request asylum in Bosnia, aiming instead for countries such as Germany, France or Italy. The Balkan route fell under the spotlight in 2015 during the so-called ‘long summer of migration’ when thousands of asylum seekers from Syria stretched Bosnia’s capacity as a ‘buffer zone’ and the IOM was put in charge of the camps, with the Danish Refugee Council (DRC), a humanitarian non-profit organisation, running healthcare.

Seven years later, management is transitioning to Bosnian authorities, against the backdrop of a complex and fragmented local political structure. Numbers of migrants are much lower now, with occupancy in the formal camps around 1,840 against a capacity of over 5,200.

Almost 90% of migrants are single men, mostly from Pakistan and heading to Italy. But there are also growing numbers of Afghans and some Cubans, Iranians and Bangladeshis. They occupy settlements divided along ethnic lines and clashes are not uncommon, with one death registered this month. Threatening scrawls have appeared on the walls of some shelters.

Laura Lungarotti, IOM’s chief of mission in Bosnia, says the situation has evolved “tremendously” over the past year. Numbers are sharply down and camps have more capacity. For this reason, migration in Bosnia now needs “durable solutions, not emergency ones.” Solutions come from the “inclusion of migrants in the health system, with resources dedicated to migrants used for the local population,” she says. But achieving this balance is not easy as long as many stay outside the formal system.

In another abandoned house, empty cans of energy drinks indicates the presence of migrants. Twenty young men — Pakistani and Afghans from the same Pashtun ethnic group — live in this house guarded by a chained dog. It’s a sign that the dog’s owner is a long term inhabitant and might be working as a smuggler for the others, an aid worker explains. Many have scabies after sleeping on bedding infested by the parasite and then returning to the same places after attempting ‘the game’. One also has an infection caused by a bad burn from cooking oil.

In camps such as the newly-rebuilt Lipa or in Sarajevo, they would have access to food, beds and a range of medical services, including a doctor, medicines, mental health facilities and an isolation room for Covid cases.

As migration experts point out, the international community has become effectively complicit in the ‘game’, which also involves human traffickers. Migrants trying to get to the EU treat the formal camps like Lipa as winter ‘pit-stops’, with the average length of stay just 40 days before moving on.

Professor Claudio Minca of the University of Bologna says this is the result of political ambiguities that have left a ‘gray area’ in the governance of these mobile and ephemeral ‘geographies’ based on information about the Balkan route shared through social media. This includes notes on mountains, rivers and fields, as well as smuggling networks, informal and institutional camps, and NGOs offering food and medical care to migrants. 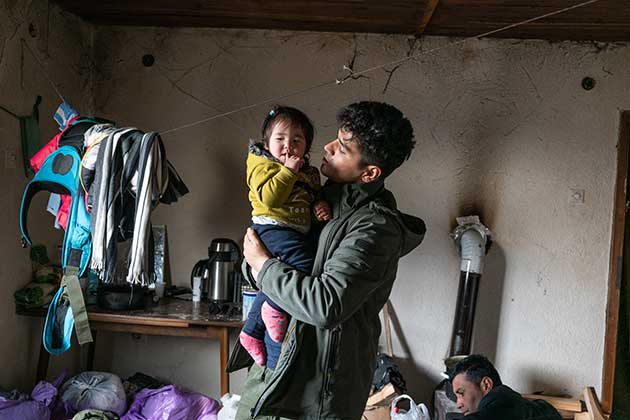 “It also reflects, to some extent, a sense of pride on the part of the refugees themselves, related to their determination to succeed not only in just crossing, but also in surviving when they are pushed back in preparation for the next attempt,” Minca and Jessica Collins say in their research paper ‘The Making of Migration’.

This grey area is also a source of tension with local Bosnian communities which sometimes perceive migrants as competing for resources, including health care.

Some migrants’ settlements are known and get support from local and international organisations, with food, portable showers and health checks. Only the UN, Red Cross and DRC are allowed by Bosnia to deliver food however. And migrants are banned from using public transport and taxis under a measure justified by ‘Covid restrictions’.

Since migrants are extremely mobile, many pass under the radar. Cases of COVID, other airborne respiratory diseases, tuberculosis, scabies, related infections and antibiotic resistance remain difficult to analyse and detect.

The director of Bihać local hospital, Ademir Jusufagic, says that when the wave of migrants arrived in 2015 it was heartbreaking to see how many children were in need of medical assistance. But fast forward several years and a pandemic, the limitations of the local system stand out, despite some investments by the UN and international agencies to provide the hospital with an X-ray machine and ambulances.

The main challenge, he says, is the lack of finances, especially after an earthquake that heavily damaged the hospital. Low wages make it hard to find and retain doctors and nurses. Most of the young staff go abroad.

“Prevention is down to better investments at a state level. You need to provide higher salaries, especially in places like this,” he says.

From a health security perspective, Jusufagic cites cases among migrants of tuberculosis, which was not present locally, and a high percentage of scabies that can get infected. It is difficult to assess the impact of antibiotic resistance in a mobile population hoping to reach better economic and social conditions. Cases of syphilis and HIV are also reported.

“The first challenge was that there was no control of makeshift camps and no place to surely find people, as migrants were constantly on the move,” he said. “The moving is the biggest issue, as many things go uncontrolled, so we didn’t know what would happen in terms of basic epidemiological prevention in an environment that lacked basic hygiene. So the priority was to provide people the means to clean themselves.”

Meeting in a café along the route to the Croatian border, a well known activist explains how the gulf between local and global perspectives illustrates the source of much of the trouble, as well as the solution for managing healthcare.

“International agencies came having no knowledge of what Bosnia is today and its recent history,” says Ines Tanovic, manager of Kompas 071, an organization that supports migrants on their way to the ‘game’. “The humanitarian industry is a machine and it damages us on the ground with a kind of white-saviour syndrome. Here the focus became only on the migrants but not on the local population.”

As she talks, a group of Pakistanis from Peshawar donate the food they have been donated by an international organization and ask to take a shower “before trying the game.” Tanovic gives them the key smiling and continues to chat.

“People were seeing migrants receiving five jackets each, with no coordination. Then you would see these migrants sell the jackets to Bosnian people with an average salary of 400 euros. It was like seeing capitalism turning the poor against the poor.”

The memory of former Yugoslavia, “where everything was provided for”, also plays a role in the competition for health services, with the downsizing of the public sector in favour of the private, just as local poverty increased.

“Even if the international organisations bought ambulances and some machines, much more could have done for the locals,” Tanovic says.

Migrants’ journeys are notoriously long. Just how long can depend on how much money is paid to human smugglers who guide them through war-time minefields, usually in big groups, according to NGOs. It’s rare not to be caught by the police on the first attempt, so migrants return to the shelters they started from. Many are in bad physical condition after long treks.

“But in the end they all manage it, so attempts by the Croatian police to stop them sound like a waste of money that could be spent better,” comments Silvia Maraone, country coordinator of the Italian NGO Ipsia.

In a hill-top ruin occupied mainly by families from Syria and Afghanistan, a young father holds his 18-month-old daughter. An ethnic Tajik, he says he fled Afghanistan because he feared the Taliban would kill him. Caught in the “grey” zone of the “game”, he explains that his wife and other children are already in Germany but it would take nearly two years for his and his baby’s papers to be processed. “I can’t wait that long, I need to go to my family,” he says.

Names of asylum seekers have been changed or omitted to protect their identities. Additional reporting by Asim Beslija.

*Reporting for this article was funded by the European Journalism Centre, through the Global Health Security Call, a programme supported by the Bill & Melinda Gates Foundation.