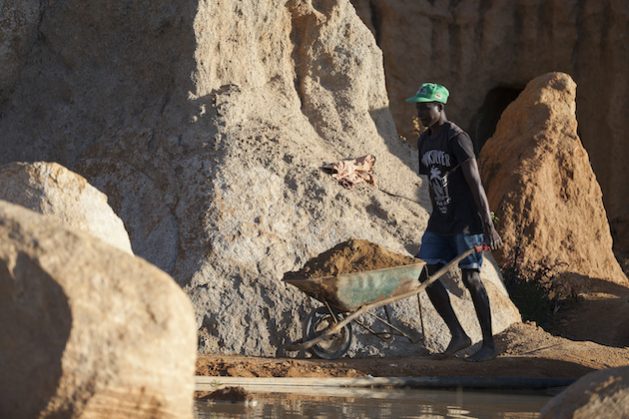 Nesbit Gavanga, who mines sand illegally and sells it to builders, says he has few other economic options in Zimbabwe. Environmentalists, however, are concerned about land degradation. Credit: Jeffrey Moyo/IPS

CHITUNGWIZA, Zimbabwe, Sep 7 2022 (IPS) - In Chitungwiza, right next to the highway, 36-year-old Nesbit Gavanga and his five colleagues use shovels as they load trucks with sand.

The six apparently are in the business of sand-poaching and openly explain that every other day they engage in running battles with environmental officials who seek to curtail land degradation here. The group’s informal sand quarry lies 25 kilometers southeast of the Zimbabwean capital Harare.

For Gavanga and his colleagues, sand-poaching has been a source of income for years as the gang has never been formally employed.

Gavanga, with the others, invaded a patch of land in Chitungwiza to begin mining sand about eight years ago.

“This patch of land has given us money over the years, and we can’t afford to leave it. We are here to stay, and we are here to turn the sand into money,” Gavanga told IPS.

Gavanga is unfazed by the severity of damage he and his colleagues have unleashed on the giant swathes of land they have invaded in Chitungwiza.

What they care about is money, and Gavanga, with his colleagues, has managed to establish a huge customer base over the years.

“We just bring our picks and shovels here, and customers come with their trucks, and we fill the trucks with the sand we sell. Yes, this isn’t our land, but we have to survive from it even though (the authorities say) we are not allowed to mine,” 34-year-old Melford Mahamba, one of Gavanga’s colleagues, told IPS.

Gavanga claimed they make at least 30 to 40 US dollars daily from the enterprise.

But that is bad news for the environment.

Sand poachers have wrought huge scars on land across Zimbabwe as they harvest the river sand. These poachers leave uncovered pits.

According to the Environmental Management Agency (EMA), Zimbabwe’s statutory body responsible for ensuring the sustainable management of natural resources and protection of the environment, approximately 1694 hectares of land are affected by sand-poaching in the country, with Harare contributing to over 850 hectares of the statistics.

EMA has not been successful in stopping the sand poachers.

“Authorities chase us away from the places we mine for sand, but we always return in no time, even as they arrest us at times. We just bribe the officials and continue with the business,” Mahamba said.

Environmentalists like Happison Chikova, based in Harare, blamed Zimbabwe’s poor economy for the land degradation unleashed by sand poachers.

“These people have no jobs. They think by digging up sand soils for sale, believing they may break free from bankruptcy and poverty, but alas. They only make the environment suffer as they get very little money that hardly changes their lives,” Chikova told IPS.

But for the sand poachers like Mahamba, the profits are significant.

“The profits are huge since sand sells for 6 to 8 US dollars a cubic meter. We sell to clients using their own transport,” said Mahamba.

The sand poachers, in fact, incur very few costs, and the only costs they have to shoulder are the bribes given to council police.

Council authorities, for instance, in Chitungwiza, even though they conduct regular raids on sand poachers, are not fully capacitated.

“We conduct raids on sand poachers, but we don’t do that always due to insufficient resources, and so the sand poachers always go back to their illegal activities. It is like a cat-and-mouse game,” said Lovemore Meya, the Chitungwiza Municipality public relations officer.

For environmentalists like Chikova, sand poachers “damage vegetation while they dig out wide and deep pits which subsequently get flooded each rain season.”

Amid growing sand poaching in Zimbabwe, environmental lawyers insinuate that the practice contributes to climate change.

EMA statistics have shown that as of December 2019, 9.5 million square meters of land across Zimbabwe had degraded due to illegal sand poaching.

As vast swathes of land fall to degradation, environmental activists like Kudakwashe Murisi in Masvingo, Zimbabwe’s oldest town, has blamed the country’s polarized politics for enabling sand poachers to do so as they please with the environment.

“Sand poachers are often youths with links to the ruling Zanu-PF party, obviously shielded by their political leadership, making it difficult for anyone to call them to order when they start digging up everywhere for sand soil,” Murisi told IPS.