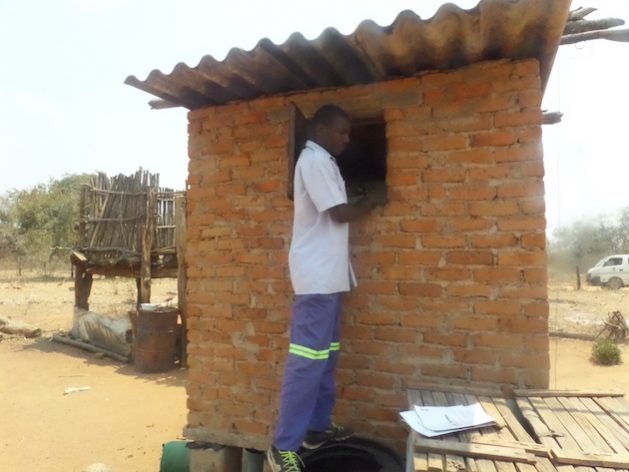 Edious Murewa, resettled farmer, is on his farm where his barns are empty and have been for years. Experts blame climate change and a lack of farming know-how for the resettled farmers’ woes. Credit: Jeffrey Moyo/IPS

MWENEZI, Zimbabwe, Oct 17 2022 (IPS) - Edious Murewa has for years boasted of owning a 10-hectare piece of land, but now the 52-year-old is full of regrets. He faces poverty years after he invaded part of a farm once owned by a white commercial farmer.

He (Murewa) was 30 years old when he abandoned his ancestral home in the Mazetese area in the Mwenezi district, in Zimbabwe’s Masvingo province and headed west to get his own piece of land at the height of this country’s chaotic land seizures from white commercial farmers.

Even as Murewa and several other resettled farmers in Mwenezi are beneficiaries of this country’s agricultural inputs like fertilizer and maize seeds, for years, they have had no success in farming on the seized pieces of land as they get next to zero yields each harvest season.

For Murewa, together with his family – his wife and five children that never finished school because they were required to toil on their 10-hectare piece of land, poverty has turned into their daily foe.

“When I was still at my old home before abandoning it to come here, life was better. I used to send my children to school from the crop yields I was getting each harvest season, but that is no more now as our crops fail now and then,” Murewa told IPS.

Now, alongside several other resettled farmers in the drought-prone Zimbabwean district, Murewa has become a habitual charity case.

He and his family depend on donor food handouts and maize meal donations from the Zimbabwean government.

Murewa says the country’s governing party, the Zimbabwe Africa National Union Patriotic Front (ZANU-PF), has for many years stepped in to rescue him and his family as drought impacts their farm.

As a result, fearing losing his piece of land, Murewa has to pay back the ruling party with his vote at each election.

So, decades after seizing land from white farmers, many of Zimbabwe’s resettled farmers like Murewa are having to contend with gruelling poverty, with some of them dwelling in slums on the farms they invaded.

Some, like 56-year-old Nyson Dewa, a resettled farmer at a farm outside Bindura in Zimbabwe’s Mashonaland Central Province, have given up on farming.

As others benefitted from farm inputs from the government, Dewa claimed he had always been left out, which has led to him failing as a resettled farmer.

For him, just like Murewa in Masvingo, life was better before he decided to join the wave of land invasions here.

He (Dewa) pinned the blame for his agricultural failures on his support for the country’s number one opposition, the Citizens Coalition for Change (CCC), which has resulted in him being denied access to farming inputs from government.

Poverty has not spared him, and his cry for help has often fallen on deaf ears.

Then, over seven million hectares (17.3 million acres) of land were redistributed to the country’s now poor resettled farmers like Dewa and Murewa.

For the late Zimbabwean President Robert Mugabe, parceling out land to his black citizens was compensation for colonialism. About 4,500 white farmers were dispossessed, often violently, resulting in one million black Zimbabweans being resettled on the seized white-owned farms.

Yet, that for many has not made their lives any better.

Climate change experts like Happison Chikova blame growing climate change impacts for the continued failure of many of this country’s resettled farmers.

“Unpredictable weather patterns owing to climate change have worsened the poverty situation of the resettled farmers who have limited understanding of the changing climate,” Chikova told IPS.

But these have not helped, misleading the poor farmers each farming season.

Even traditional healers like 88-year-old Kumbirai Chikwaka, who claim to conduct rain-making ceremonies around Masvingo, have not made the situation any better for resettled farmers.

“These traditional healers rob us of our little resources claiming to perform rituals to bring the rains, but we still rarely have any rain. It’s like the white farmers took the rains away with them,” said Murewa.

Agricultural experts blame a lack of technical skills for resettled farmers’ failure on the land they seized from white farmers.

“The resettled farmers suffer because they allocated themselves large farms without technical know-how in terms of serious farming, and that’s why most of them are now very poor,” Denzel Makarudze, an agricultural extension officer in Masvingo, Zimbabwe’s oldest town, told IPS.