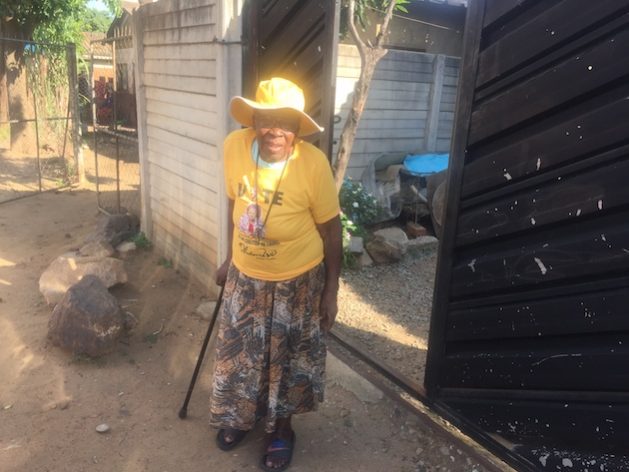 Pictured at her home in Harare, 91-year-old Idah Hanyani, better known as Gogo Chihara, a staunch opposition supporter in Zimbabwe, dons a yellow T-shirt adorned with the portrait of the country’s top opposition leader Nelson Chamisa whom she has vowed to back as she fights for political change in this Southern African nation. Credit: Jeffrey Moyo/ IPS.

At home in Glenview, Harare’s high-density suburb, Hanyani told IPS she has featured at opposition rallies for years. During her interview, she was reclining on her brownish leather sofa donated to her by the opposition Citizens Coalition for Change (CCC) president Nelson Chamisa.

She said she has never missed a single major opposition rally since she waded into opposition politics following this Southern African nation’s independence four decades ago.

“I’m not new to opposition politics. I supported the opposition UANC led by Bishop Abel Muzorewa before he (Muzorewa) handed me to Morgan Tsvangirai when the MDC was formed in 1999. Muzorewa announced that a new political party had been formed before he personally handed me to Tsvangirai to back his party at its formation, which I have supported until Tsvangirai died in 2018,” Hanyani told IPS.

A mother of four, three of whom have died, Hanyani said she has eleven grandchildren. The country’s economic crisis has not spared her family, so they cannot support her.

“This is why I have told them to register to vote in the coming 2023 elections, and most of them have heeded my advice,” said Hanyani.

Hanyani said only Olga, one of her grandchildren based in the United Kingdom, is supporting her.

Hanyani said she has become popular all over the country, featuring at opposition CCC rallies, backing the opposition through thick and thin as one of the country’s senior citizens who have thirsted for political change in the face of Zimbabwe’s deteriorating economy.

On February 20 this year, she (Hanyani) was part of a sea of supporters that thronged Zimbabwe Grounds in Highfields poor income suburb where her party, CCC had a rally addressed by the party’s leader Nelson Chamisa ahead of the March 26 by-elections.

In March this year, Gogo Chihera was also featured at the CCC rally in Bulawayo, Zimbabwe’s second-largest city.

“At every CCC rally I attend, I sit next to my son, the President, Chamisa and the chairperson of the party,” she said, balancing her chin on her hands that held her walking stick.

Hanyani said she knows she has become a sensation in the opposition CCC, even occupying the high table at every major opposition rally.

For her, the opposition rallies have become a great source of joy.

“At every CCC rally, I feel overjoyed, like I am being possessed like I am being filled by some strange supernatural powers. At rallies where I go, people scream when they see me walking and, at times, dancing with the support of my walking stick. People shout – Chihera, come on, Chihera, come!” she said.

Not spared by Zimbabwe’s worsening economic hardships, Hanyani said the opposition CCC president Chamisa had stepped in to directly supply her with food parcels every month.

Not only that, but her outstanding support for Chamisa has seen her receiving a gift of sofas from the youthful 44-year-old leader earlier this year.

“Chamisa buys me food every month. With just a phone call to him, Chamisa can send someone with food to me. Just last month, Chamisa bought me these leather sofas. He is a leader motivated by love. I love that boy; he is a great leader,” said Gogo Chihera.

But even as she backs Chamisa and the opposition CCC, her mistrust for the Zimbabwe Electoral Commission, which manages polls here, has shrivelled her hope for transparent elections.

“I personally don’t and can’t trust ZEC because Zanu-PF, at every election, sends its thugs to chase Chamisa’s election agents at polling stations in order to stuff ballot boxes with fake votes in favour of the ruling party,” she said.

In a country where political intolerance stands rather on the high side, Hanyani also said: “I don’t like Zanu-PF people”.

“I don’t like people who support Zanu-PF even in my eyes, my mind and my heart. They don’t dare come here because they back our suffering,” said Hanyani.

She said she does not fear being attacked owing to her political affiliation, claiming that “Zanu-PF supporters are afraid of me. They know I speak my mind freely without fear in their face.”

She said Zimbabwe’s First Lady Auxilia Mnangagwa embraced her three years ago when she visited her area.

“Auxilia Mnangagwa in 2019, when she came here leading some clean-up campaign, hugged me before she knew I was in the opposition. When she later knew I was an opposition supporter, she handed me her cap, a white one which I still have kept. I don’t know why she gave it to me. Whether or not that was a way of saying to me come to Zanu-PF, I don’t know,” said Hanyani.

Hanyani claimed that she has many friends who have secretly told her that they back Chamisa behind the scenes because they fear being terrorised by ruling party supporters.

“My friends come secretly telling me that they are with me in supporting Chamisa because they are afraid of violent Zanu-PF supporters. I am a bishop of change here in my area, and everybody here knows me. I know people want change now,” she said.

The aged Hanyani claimed that even some Zanu-PF supporters in her area were confiding in her about their secret support for Chamisa’s opposition CCC.

She said they (Zanu-PF supporters) claimed they only supported their party during the day and switched to the opposition CCC by night, fearing being brutalised.

During Zimbabwe’s Independence Day celebrations this year, Hanyani instead castigated the celebrations.

“I am pained by this year’s independence celebrations because many people, even with this independence, are suffering. I hate Mnangagwa. Mugabe was 100 percent better than him.”

Ecstatic about the impending Zimbabwe elections next year, Hanyani said: “If ever Chamisa is declared winner in 2023, even the birds of heaven will come down rejoicing, the angels of Jesus Christ.”

“I will be the happiest person alive then. Come elections next year,” she said.

Hanyani, at 85 after the 2018 elections, made news headlines when, with many other opposition activists, she stormed the Constitutional Court to tell President Mnangagwa’s lawyers that she wanted the vote “they had stolen” back.

This happened following the disputed 2018 presidential elections, which Mnangagwa won after a Constitutional Court ruling.

On the day of her IPS interview, Hanyani claimed she had only had tea and plain bread in the morning, claiming she was starving.

Nevertheless, as she parted ways with IPS, she broke into song and dance, praising Chamisa.

Ironically, Chamisa has survived a litany of assassination attempts.