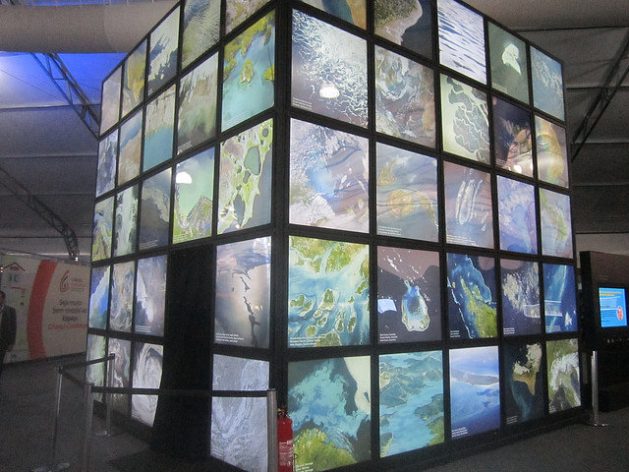 "Waters of the Planet," an installation of the Museum of Tomorrow in Rio de Janeiro, exhibited in the Citizen’s Village at the 8th Water Forum, held in the capital of Brazil, is a large cube with satellite photos showing the Earth’s seas, rivers and lakes from space. Credit: Mario Osava / IPS

BRASILIA, Mar 21 2018 (IPS) - Confidence in large rivers and giant aquifers plummeted in many parts of the world, in the face of the expansion of water crises after intense and prolonged droughts in the last decade.

Water resources in the soil and subsoil do not hold up if the dry season lasts longer than usual for several years, as seen in several parts of Brazil and in other countries such as India, South Africa and Australia.

Brasilia, which hosts the 8th World Water Forum on Mar. 18-23, is a prime example, because no one could have imagined that the Brazilian capital, nicknamed the “birthplace of the waters” for its three large basins, would have to endure water rationing since early 2017.

“High levels of population growth, scarce investment in infrastructure and three years of below-average rainfall caused a water crisis,” said the governor of the Federal District, Rodrigo Rollemberg, at the official opening of the Forum, on Mar. 19, before highlighting works carried out by his government to ensure supply in the near future.

“Rain is the source of fresh water, sometimes moisture in the air is overlooked, because it’s not visible to the eye,” said Gerard Moss, a pilot who from 2007 to 2015 conducted the Flying Rivers project, which studied the air currents that carry water vapour through the Amazon basin.

“It is essential to maintain the rains and forests are indispensable in this sense, helping the moisture from the ocean to reach the interior of the continent. The ocean water would not travel 2,500 or 3,000 km to produce the rains that allow estate owners in Mato Grosso (in east-central Brazil) to produce two or three harvests a year,” he told IPS.

Moss’s research, which identified “flying rivers” in the Amazon rainforest that supplied several cities in Brazil, was discontinued, but it serves as a tool for the environmental education of children and adults, promoted by his wife Margi Moss, an initiative that will be moved to Europe.

Knowledge of the phenomenon of humid air currents that carry water to the rainforest provides a further argument to the theme adopted by UN-Water this year for World Water Day, which is celebrated on Mar. 22: “Nature for Water”.

UN-Water says nature-based solutions are the answer to many problems related to water, such as droughts and floods that are alternating with increasing frequency around the world, and to pollution. 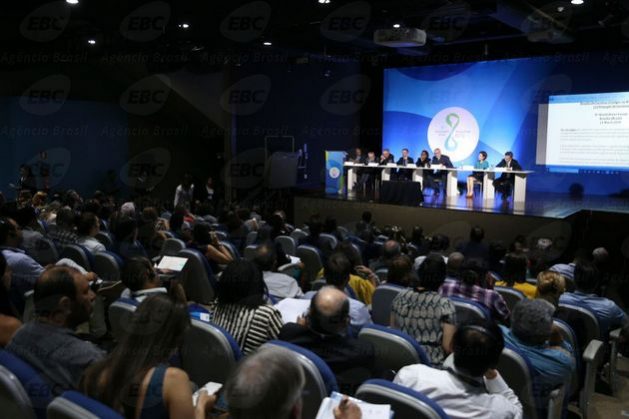 The 8th World Water Forum began on Monday, Mar. 19, in the Ulysses Guimarães Convention Centre in the capital of Brazil. Credit: EBC

Reforesting and conserving forests, restoring wetlands and reconnecting rivers with floodplains are some of its recommendations.

It’s about “not reinventing the wheel to deal with extreme weather events,” Glauco Kimura, a World Water Forum consultant, said regarding the campaign. “There is natural infrastructure, such as mangroves and other ecosystems, that help curb the impacts of hurricanes and excess rainfall,” he told IPS.

“Without forests around the springs and aquifers, there is less water, as discovered by São Paulo,” which was hit by severe shortages in 2014 and 2015, Kimura said.

To coexist with drought, the consultant recommended learning from the inhabitants of Brazil’s semi-arid Northeast, who have built tanks to collect and store rainwater to get them through the dry season. “In central and southern Brazil that culture does not exist,” he lamented.

During the drought that has lasted since 2012 in the Northeast, there has been no massive exodus of desperate people to cities to the south, where they even looted shops during earlier, less severe, droughts.

This is largely due to social programmes such as Bolsa Familia and pensions for workers and disabled people, but also to the more than one million water tanks built mainly by the Articulação no Semi-Árido Brasileiro (roughly, Networking in Brazil’s Semiarid Region – ASA), a movement of some 3,000 social organisations working on behalf of rural families vulnerable to drought.

Another example of nature-based solutions is the Cultivating Good Water Programme, promoted by Itaipú Binacional, the company that operates the second largest hydroelectric plant in the world (in terms of installed capacity), shared by Brazil and Paraguay on the Paraná River.

Some 23 million trees were planted, restoring 1,322 km of riverbank forests, and 30,000 hectares of land received protection, on the Brazilian side, said Newton Kaminski, director of coordination in Itaipu. 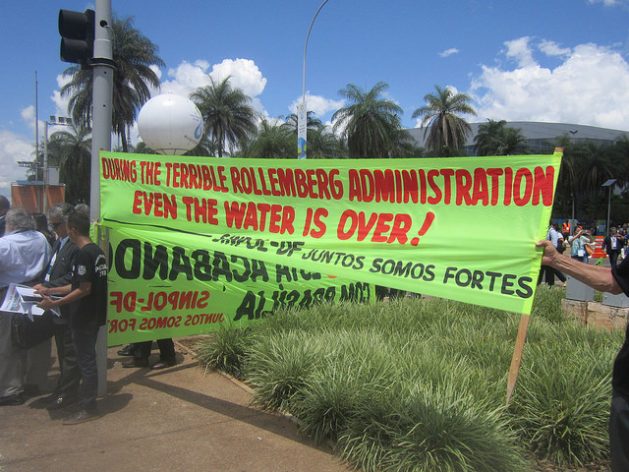 Protests against the governor of the Federal District, Rodrigo Rollemberg, accused of being responsible for water rationing in Brasilia. The water crisis broke out after he took office in 2014, but it was an inherited problem, which now resonates in the 8th World Water Forum, held Mar. 18-23 in the capital of Brazil. Credit: Mario Osava / IPS

“The key was the river basin management, with integrated actions on all fronts, not just restoration of water sources and groundwater recharge areas. Reforestation without conservation of the soil does not bring about major results. Also necessary are social participation, education, and agriculture that does not deteriorate the soil,” Kaminsky told IPS.

The president of Cape Verde, Jorge Carlos Fonseca, stressed in his speech before nine other government leaders participating in the opening of the World Water Forum that learning to “live in symbiotic harmony with nature” was fundamental to overcoming the hunger and thirst suffered by his people in recent years because of drought.

“Preserving nature and making rational use of the resources that it provides us, changing the relation of human beings with nature,” is the lesson learned from this experience, he said. “We broke the dry season-hunger tandem,” he said.

Sea water desalination and rainwater collection contributed to the improvement of the water situation, and the goal is to ensure 90 liters per person per day, below the 110 liters recommended by the United Nations.

Reforesting and conserving recharge areas and combating the degradation of soil due to change in use are the recommendations of Fabiola Tábora, executive secretary of the Global Water Partnership (GWP) in Central America.

Droughts in Central America have a worse impact along the Pacific west coast, which concentrates 70 percent of the sub-region’s population and is known as “the dry corridor”. That hurts food security and hydropower generation, which accounts for half of the national energy supply, she told IPS.

Another positive experience was the recovery of the La Poza micro-basin, in the southwest of El Salvador, involving broad community participation in integrated management, Tábora mentioned.

In Costa Rica and Guatemala, she highlighted the work with private companies and the government to generate environmental funds, which are invested in the management and conservation of watersheds.

These were cited as solutions in response to numerous references to world tragedies during the initial sessions of the 8th World Water Forum: nearly 700 million people without access to water in the world, two billion people drinking contaminated water, 3.5 billion without sanitation, a thousand children dying a day because of poor water quality and projections that the situation will worsen in the future.

The government leaders that were present followed the World Water Forum theme “Sharing Water”,by making continuous calls for cooperation and exchange of knowledge and experiences, since 40 percent of the world’s population depends on transboundary waters.