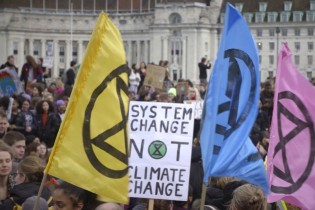 By IPS World Desk
2019 will be remembered as the year the climate crisis shook us all. Hopefully, it will also be remembered for the fight back manifested in the spread of mass protests and civic movements against governments and industries failing to respond.

By IPS World Desk
There are an estimated 370 million indigenous people in the world, living across 90 countries. They live in all geographic regions and represent 5000 different cultures. These people are inheritors and practitioners of unique cultures and ways of relating to others yet are being forced to give up their ways of life.

By IPS World Desk
One third of the planet's land surface is under the threat of desertification, impacting over 250 million people.

By IPS World Desk
Journalists and media outlets worldwide have recently been subject to a subtle wave of vilification. Populist rhetoric and public indifference have begun to threaten the very foundation of our freedom.

By IPS World Desk
Awareness of Austism Spectrum Disorder (ASD) has continued to grow worldwide, in recent years. But the number of diagnoses have continued to increase unabated.

By IPS World Desk
Water is a precondition for human existence, and for the sustainability of our planet. It is entwined with almost everything human, from climate change and global economy to gender issues and human rights.

By IPS World Desk
Systemic inequalities based on gender, race, income and geography are mirrored in the digital realm and leave many women, especially the poor and the rural, trailing behind Africa’s tech transformation.

By IPS World Desk
The pilot version of a new index for measuring empowerment and the inclusion of women in agriculture was launched April 27 in Washington DC.

By IPS World Desk
The theme for the 25th celebration of World Press Freedom Day is “Keeping Power in Check: Media, Justice and The Rule of Law,” focussing on the importance of an enabling legal environment for press freedom, and gives attention to the role of an independent judiciary in ensuring legal guarantees for press freedom and prosecution of crimes against journalists..

By IPS World Desk
At a time when funding for UN agencies is on the decline – and also threatened with cuts by the Trump administration—the Indian government has made an additional contribution of $50 million to development funding.
Next Page »
ADVERTISEMENT ADVERTISEMENT