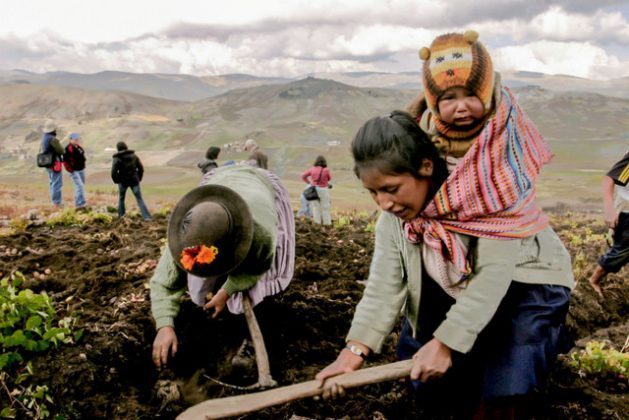 ROME, Apr 27 2018 (IPS) - The pilot version of a new index for measuring empowerment and the inclusion of women in agriculture was launched April 27 in Washington DC.

Described as the Project-Women’s Empowerment in Agriculture Index (Pro-WEAI), it was developed jointly by the International Food Policy Research Institute (IFPRI), the Oxford Poverty and Human Development Initiative (OPHI), and thirteen partner projects.

The tool helps agricultural developmental projects to assess women’s empowerment in a project setting, diagnose areas of women’s disempowerment, design strategies to address deficiencies, and monitor project outcomes, according to a press release.

“The pro-WEAI is a new tool that tells us what is happening within the household: Did participation in the project improve women’s control of income or intrahousehold harmony? Did it increase the possibility of domestic violence?” said Agnes Quisumbing, senior research fellow, IFPRI.

“It measures aspects of empowerment key to health and nutrition outcomes, an integral part of nutrition-sensitive agricultural projects.”

Pro-WEAI builds on the success of the original Women’s Empowerment in Agriculture Index (WEAI), launched in 2012, by directly capturing indicators of women’s empowerment at the project level, instituting a mechanism by which programs can measure the impact of an intervention.

Based on an initial round of project data, the core empowerment module of pro-WEAI measures three domains of power: power from within (intrinsic agency), power to (instrumental agency), and power with (collective agency).

Seven of the Pro-WEAI indicators build on the original WEAI indicators with some modifications: input in productive decisions; autonomy in decisions about income; ownership of land and other assets; access to and decisions on credit; control over income; work balance; and group membership.

Pro-WEAI strengthens the linkages to the three types of powers by including 5 new indicators: self-efficacy; attitudes toward domestic violence; visiting important locations; membership in influential groups; and respect among household members. A woman is considered empowered in pro-WEAI if she has adequate achievements in 75 percent, or 9 out of the 12 indicators, according to the press release.

“Combining qualitative and quantitative study has helped us understand empowerment,” said Ruth Meinzen-Dick, senior research fellow, IFPRI. “In the qualitative study, people described an empowered woman as someone who helps others. That fits well with the ‘power with’ domain in the quantitative indicators, and shows that empowerment is not just an individual activity,” she added.

The index was developed as part of the Gender Agriculture and Assets Project 2 (GAAP2), which works with 13 agricultural development projects that expressed the need for ways to measure if the interventions improved women’s lives. For instance, health and nutrition projects wanted to know if the intervention increased women’s decision-making in areas related to health and nutrition outcomes. These partner projects collected data to pilot pro-WEAI in the nine countries in which they work.

“By linking both quantitative and qualitative tools, pro-WEAI has improved understanding of how men and women define complex aspects such as empowerment, status, self-esteem, and tangible outcomes that are derived from being empowered,” said Susan Kaaria, Senior Gender Officer, Social Policies and Rural Institutions Division at the Food and Agriculture Organization (FAO).

Pro-WEAI is helping the UN Joint programme on Accelerating Progress towards the Economic Empowerment of Rural Women, implemented by FAO, International Fund for Agriculture Development, World Food Programme and UN Women, in assessing the programme’s contribution to the empowerment of rural women in the Adami Tulu and Yaya Gulele districts of Ethiopia.

“I believe the use of the Pro-WEAI tools is going to result in more approaches being designed in the future that engage men and women, maybe equally or in equitable ways—even if it’s for the benefit of women’s empowerment,” said Bobbi Gray, research director, Grameen Foundation. “This has been an eye-opening experience, and we look forward to continuing this sort of research in our other projects.”

Pro-WEAI validation and testing is still ongoing. The final version of the pro-WEAI will be informed by the endline data collection and feedback received from stakeholders and project partners.