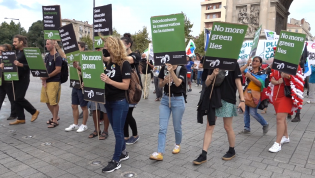 On the occasion of World Environment Day, 5 June 2021, drawing from IPS’s bank of features and opinion editorials published this year, we are re-publishing one article a day, for the next two weeks. The original article was published on February 19 2021

By Manipadma Jena
Last June when more than half of India was reeling under daily temperatures topping 40 degrees Celsius, Nursing Behera’s 11-month-old son burned both his legs when a pot of boiling water fell on him.

By Manipadma Jena
The sun has barely risen when Phlida Kharshala shakes her 8-year-old grandson awake. He hoists an empty cone-shaped bamboo basket on his back, sets the woven strap flat across his forehead and off they go into the wilderness.

By Manipadma Jena
Growing economies are thirsty economies. And water scarcity has become “the new normal” in many parts of the world, according to Torgny Holmgren executive director of the Stockholm International Water Institute (SIWI).

By Manipadma Jena
When Shiba Kurian alighted from Chennai’s city train, the evening office-returning crowd was thick and jostling. Having booked a ride-hail cab she walked out to the entrance. Instead of the cab for which she had to wait an hour, ribald comments and derisive laughter came her way from a group of roadside Romeos.

By Manipadma Jena
“Political resolve is the key for succeeding in our fight against oceans pollution,” Erik Solheim, head of UN Environment, who is leading hands-on the organisation’s global campaign to clean up seas and oceans of plastic litter, agricultural run‑off and chemical dumping, told IPS.
Next Page »
ADVERTISEMENT ADVERTISEMENT