Jun. 17 is World Day to Combat Desertification and Drought. A new report shows that climate change, overuse and conversion for agriculture, cities and infrastructure, which also drive drought and desertification, have already degraded one fifth of the planet’s land area. 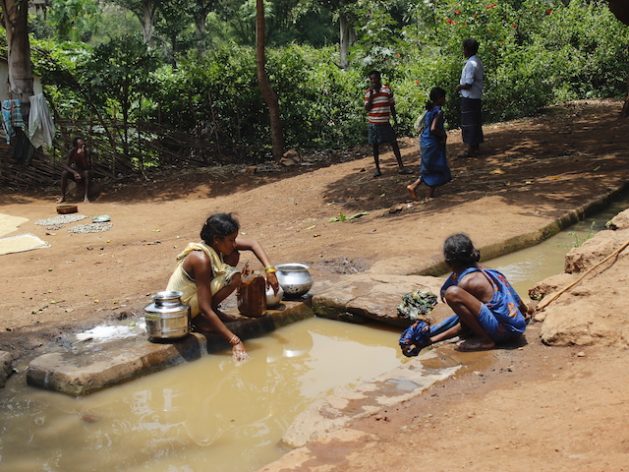 In India's Eastern Ghats indigenous communities direct a perennial hill stream under the rural employment programme to run through the middle of their village helping them access household water needs at their doorstep. Downstream water is collected in a pond for farm irrigation and bathing cattle. Credit: Manipadma Jena/IPS

BHUBANESWAR, India, Jun 17 2021 (IPS) - “Drought is on the verge of becoming the next pandemic and there is no vaccine to cure it.”

“Drought has directly affected 1.5 billion people so far this century and this number will grow dramatically unless the world gets better at managing this risk,” said Mami Mizutori, United Nations Secretary-General’s Special Representative for Disaster Risk Reduction (UNDRR). Mizutori was speaking before launch of the Global Assessment Report on Disaster Risk Reduction’s (GAR) Special Report on Drought 2021, released today Jun. 17.

Climate change, overuse and conversion for agriculture, cities and infrastructure, which also drive drought and desertification, have already degraded one fifth of the planet’s land area.

This damage harms the livelihoods of almost half the planet’s population. As of 2018, 170 countries were affected by desertification, land degradation and drought according to the UN Convention to Combat Desertification (UNCCD).

Desertification and Drought Day is celebrated every Jun. 17 by UN member nations. The 2021 theme calls for investing in activities that protect and restore natural ecosystems to boost the recovery from COVID-19 for communities, countries and economies worldwide.

“A land-centred approach to COVID-19 recovery can change the world,” said Executive Secretary of the Bonn-based UNCCD Ibrahim Thiaw. “So far, the world’s largest economies have already spent $ 16 trillion in post-COVID recovery efforts. Investing a fifth of that amount, collectively, per year, could shift the world’s economies to a sustainability trajectory. Within a decade, the global economy could create close to 400 million new green jobs, generating over $ 10 trillion in annual business value,” he said.

The scale of the land degradation challenge

Since 2015, when only three countries had comprehensive, effective drought-response plans, today 73 countries are working with the Desertification Convention developing a policy to ensure drought is survivable, not a disaster. At the start of the 2021–2030 UN Decade on Ecosystem Restoration over 115 countries have pledged to restore one billion hectares of degrading land by 2030 at a cost of $1.67 trillion.

While this is progress, it is clearly not enough. As of 2018, 70 countries are affected by drought regularly, costing lives, while 170 countries were affected by either desertification, land degradation or drought or both.

A report by PBL Netherlands Environmental Assessment Agency, released early June, draws a stark picture if current land-use policies are not changed. Between 2015 and 2050 without land restoration measures, and combined with farming intensification, soil productivity is projected to go down on 12 percent of the global land area.

To meet growing food demand, cropland expansion by about 20 percent or 300 million hectares of land would be cleared by 2050 at the expense of natural ecosystems. As a result, global biodiversity would decline six percent with 32 gigatons of carbon released to the atmosphere and marked decline in soil health and its ability to hold water would lead to increased drought and floods.

In a country of 1.4 billion, 70 percent of its rural households still depend primarily on agriculture for their livelihood, 8 out of 10 farmers are small and marginal and with 60 percent of cropland depending on monsoon for irrigation, drought can kill, quite literally.

Abinash Mohanty, researcher-author of a 2020 study mapping India’s extreme climate hotspots, told IPS that “more than 68 percent of the Indian districts are currently drought hotspots.” The study, from Delhi-based research non-profit Council on Energy, Environment and Water (CEEW), finds the Indian subcontinent has witnessed more than 478 extreme events since 1970 whose frequency has accelerated after 2005.

A summer of extreme heatwaves followed by a deficient monsoon is turning out deadly droughts as in 2018.

As drought’s stranglehold creeps over more and more land in India, agricultural uncertainties are claiming rural livelihoods and lives.

Crops fail year after year and rural farmers make desperate bids to dig deeper borewells and take on untenable debts in hope that one good crop could salvage it all. These skyrocketing farm costs and their inability to pay off debts have forced many farmers, share-croppers and daily-wage farm labourers in India to take their own life over this last decade.

In 2019, many as 10,281 persons involved in the farming sector (5,957 farmers and 4,324 agricultural labourers) have committed suicide, accounting for 7.4 percent of total suicides according the government’s National Crime Records Bureau.

Activists say this is a huge under-estimation. A majority of the 32,559 daily wage earners’ suicides are none other than migrant rural farm workers driven out to urban centres. Stigma forces families to not reveal suicides, and on the other hand local governments declare suicides as deaths for health, spurious liquor or other reasons. 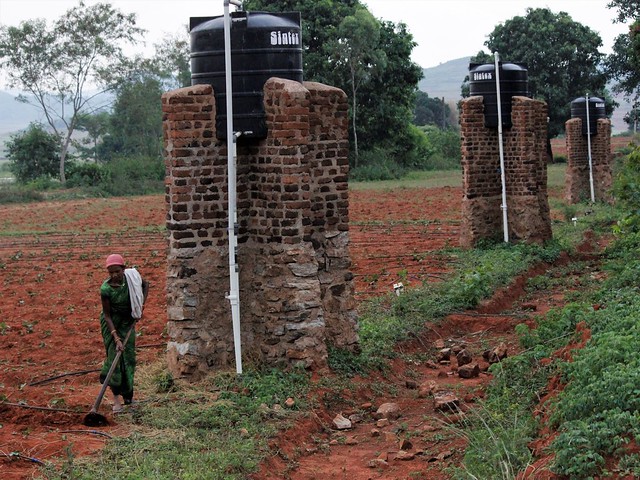 In India’s Eastern Ghats the indigenous Kondh small-holders build high water storage tanks through the rural employment programme, to conserve water. Water from a pond is pumped to these storage tanks for drip irrigation instead of pumping higher outflow wastefully directly to crops. Credit: Manipadma Jena/IPS

Solutions exist if there is political will

More than five billion hectares of land around the world can be restored with a combination of restoration and protection — an improvement in land management.

“These are not utopian scenarios,” Thiaw said, “it is fully within our abilities to reach this most ambitious scenario. But it takes determination among the world’s leaders to do so.”

Speaking at the GAR 2021 pre-launch hybrid media briefing, Head of Geneva-based UNDRR, Mizutori told journalists, “Science tells us the prevention cost for drought or any other disaster is much lower than reacting after. Putting that extra dollar in resilience by governments is not happening because politicians see their policies more in the short span of their election cycles.”

“And there is no glory in prevention. When successful in preventing a hazard becoming a disaster, you really can’t show it,” she said. “Which is why we (UNDRR) are now saying, for complex disaster like drought we need a comprehensive governance system, (firm) rules and regulations.”

When India went into a complete lockdown in March 2020, a mass reverse migration of an estimated 23 million migrant labourers  (this estimation varies widely) returned to their rural homes, they were immediately employed under the rural job guarantee programme. From March 2020 till March 2021, 3.44 billion person-days of work was generated, 44 precent higher than the corresponding period pre-pandemic. A good chunk of this mass labour was employed in building rural water conservation and irrigation infrastructure.

That such community-built drought adaptation assets are effective, is established by a country-wide 2021 study by Delhi-based non-profit research organisation Centre for Science and Environment (CSE). As per government records, over the last 15 years, more than 30 million water conservation-related ecological assets have been created totalling some 50 water structures in every Indian village. Calculations show that these structures have potentially conserved roughly 29,000 million cubic meters of water in this period and have the potential to irrigate some 19 million hectares, the study says. Maintenance of half of these water structure have been neglected however, cutting utility long-term.

“Droughts are among the most complex and severe climate-related hazards encountered, with wide-ranging and cascading impacts across societies, ecosystems and economies,” Mizutori said.

“Droughts are disasters but they do not have to be devastating,” she said.