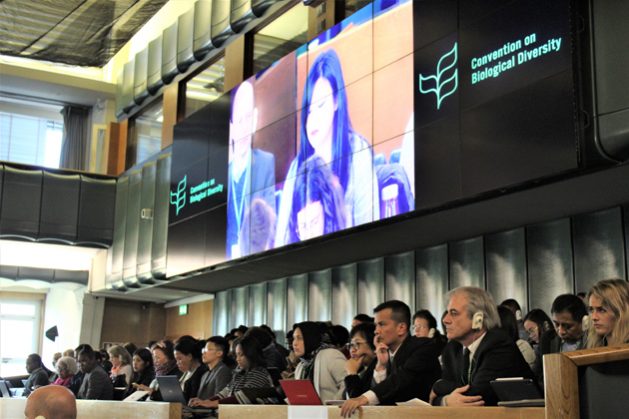 ROME, Feb 24 2020 (IPS) - “The world out there is watching and waiting for results,” Elizabeth Maruma Mrema warns while talking to IPS regarding the preservation of biodiversity of our planet.

The acting Executive Secretary of the Secretariat of the Convention on Biological Diversity, is referring to a worrying report[1] released by the Food and Agriculture Organization (FAO) which paints a grim picture of the planet.

“Many key components of biodiversity for food and agriculture at genetic, species and ecosystem levels are in decline and evidence suggests that the proportion of livestock breeds at risk of extinction is increasing,” the report says.

The FAO also warns that “nearly a third of fish stocks are overfished, and a third of freshwater fish species assessed are considered threatened”.

These are just some of the critical issues being debated during the open-ended working group on the post-2020 biodiversity framework. This round of negotiations is taking place at FAO headquarters from 24 to 29 February. In the run-up to October’s historic UN Biodiversity Conference, government officials, experts and activists from around the world gathered today at FAO headquarters, Rome, to forge ahead with negotiations. This round of talks was supposed to take place in Kunming, China, on the same dates. Due to the ongoing situation following the outbreak of the novel coronavirus 2019 (COVID-19), it was moved to Rome, Italy.

The fourteenth meeting of the Conference of Parties (COP) to the Convention on Biological Diversity (CBD) had its meeting in Sharm el-Sheikh, Egypt, in 2018. It was here that the working group on the post-2020 global biodiversity framework was appointed. The working group’s mandate was to prepare the text of a framework that would guide the work of the Convention after the year 2020. At the working group’s first meeting held in Nairobi in August 2019, the Open-ended Working Group (WG2020) requested the Co-Chairs and the Executive Secretary to prepare a zero-draft text of the post-2020 global biodiversity framework. This framework is under consideration at its second meeting, which is currently taking place in Rome. The aim of the second meeting of the Working Group is to significantly advance the negotiation of the post-2020 global biodiversity framework, discussing the different aspects of the whole ambitious project. ‘Healthy Diets’ was among the proposed initiatives during the first day of the six-day event at FAO headquarters. The initiative emphasised the importance of ‘geographical indications’ for biodiversity, with examples and experiences from Africa and Eastern Europe. Credit: Maged Srour/IPS

In the coming days, the working groups will be divided on a regional basis. They will discuss a wide variety of concerns including biodiversity, food, agriculture and fishing systems, to the importance of promoting an approach that leaves no one outside of this circuit. Civil society, the private sector, indigenous people, local communities, women and youth are all represented to create a functional framework for the whole society and at all levels. Many organisations, like Bioversity International, supported by a host of international agencies, have submitted research reports on biodiversity and food systems. It has also made representations on alternative models for access and benefit-sharing rules, practices and impacts in the Post-2020 Global Biodiversity Framework.

The voice of indigenous people

Key to the discussions is the role of indigenous people in biodiversity and Aslak Holmberg, the representative of the indigenous people, is convinced that policymakers can learn from these groups.

“There is a key message we want to share with other groups here during these negotiations,” he told IPS. “Indigenous peoples and local communities’ management of natural resources is (in fact) conserving biodiversity. (This is) because these management practices are built on a balanced relationship with the respective environment.

“Biological and cultural diversity are linked, and by this, I mean that (for indigenous communities) culture plays a fundamental role in the process of preserving biodiversity: it is in our culture to use our areas in a sustainable way. That is the message we want to share with others”.

The voice of the business sector

Representatives of the private sector too, in particular of the business world, wish to be part of the framework that will result from the negotiations and officially approved in October, in China.
Eva Zabey, Executive Director of the Business for Nature Coalition, told IPS she was grateful to the CBD secretariat for giving business and opportunity to engage and contribute to the zero draft of the post-2020 framework.

This coalition is a unique global group of influential business and conservation organisations participating in the negotiations.

“Forward-thinking businesses are starting to change the way they operate, based on their understanding of the value of nature – but this is still the exception, not the norm,” she told IPS.
“Therefore,” said Zabey, “Political leadership is needed now to transform our economic and financial systems in a way that places nature at the heart of global decision-making. It needs to create a level playing field and a stable operating environment for business.”

Zabey is looking forward to an ambitious post-2020 framework which will facilitate businesses’ involvement and create and positive “policy-business feedback loop,” she said.

Commenting on the global assessment report, she said: “The present generations have the responsibility to bequeath to future generations a planet that is not irreversibly damaged by human activity.”

“Our local, indigenous and scientific knowledge are proving that we have solutions and so no more excuses: we must live on earth differently”.

Zabey echoes Azouley. She said entrepreneurs are increasingly aware that the profit-sustainability ‘conflict’ is no longer feasible or conceivable.

“Companies planning on being successful in the future are starting to realise that financial performance is irrelevant on a dead planet.’