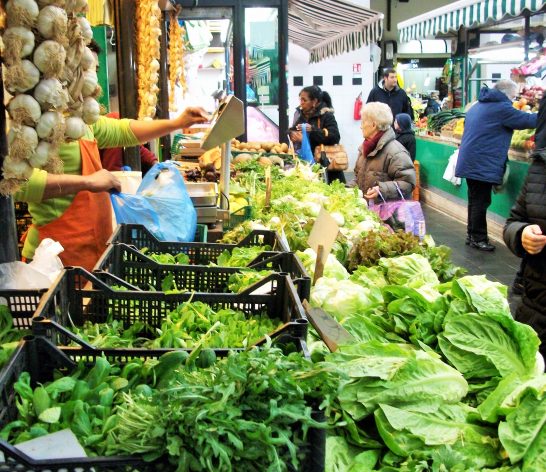 The New Agriculture Cooperative was founded in 1977 by a group of young unemployed, labourers and farmers with two main objectives: create employment in agriculture and prevent the construction of a vast area of high environmental value. In 1990 the conversion to organic farming began, followed in 1996 by the conversion of livestocks. In 2010 the Cooperative moved to biodynamic agriculture. Credit: Maged Srour/IPS

ROME, Dec 23 2018 (IPS) - While Italian agriculture is in a leading position in terms of organic farming, sustainable agriculture and being at the forefront of biodiversity conservation; water scarcity, illegal workers and the role of women and combined ageing of its workforce remain pressing concerns.

“The Italian agriculture is the greenest in Europe,” Lorenzo Bazzana, Economic Manager of Coldiretti, which is the leading organisation of farmers at Italian and European level, told IPS.

“Italy has also a leading position in terms of organics, with 72,000 organic operators,” continued Bazzana. Indeed, according to 2014 data from the Food and Agriculture Organization of the United Nations (FAO), 10.5 percent of arable land is dedicated to organic agriculture.

“Our country is at the forefront of biodiversity conservation, with the decision not to cultivate genetically modified organisms (GMOs) and with 40,000 farms committed to keep and preserve seeds and plants at risk of extinction. Moreover, it has the primacy in terms of food security, with the highest number of agri-food products in compliance with irregular chemical residues [99.4 percent].”

The positive data os confirmed by various studies, such as the Food Sustainability Index (FSI), developed by the Barilla Center for Food and Nutrition (BCFN), a multidisciplinary think tank working for food sustainability. The FSI is an indicator on food sustainability that analysed 34 countries representing 87 percent of the world economy (Gross Domestic Product, GDP) and over two thirds of global population, It focused on three main pillars, in light of the Sustainable Development Goals (SDGs):

When it comes to sustainable agriculture, Italy is the top performer among the 34 ranked countries. It scores high across the “environmental impact of water on agriculture, sustainability of water withdrawal, water scarcity and water management sub-indicators,” according to a report from the BCFN summarising the data unveiled by the 2017 FSI.

However, water scarcity in central and southern Italy, for example during the summer of 2017, exposed criticality’s in terms of poor and inadequate water infrastructures. The country has positive scores across many other indicators such as organic farming and strong laws exist to protect smallholders’ land rights.

The illegal working issue in agriculture

However, according to the BCFN’s report, the participation rate of women in farming is only one percent and that of youth is only 3.1 percent, a minimal number compared with that of similar economies such as Spain which counts nearly one third of its agricultural workforce as having women and youth represented.

Also of strong concern is the employment of illegal workers. According to the Italian trade union for farmers, Flai-Cgil, there are a huge amount of farmers—some 400,000—who employ illegal workers.

According to the union, they farmers employ illegal workers through a black market that is exploited by criminal organisations, making the phenomenon of so-called ‘agromafia’ or ‘caporalato’, an economic and social scourge for the country.

The generational turnover in agricultural work is not happening

“I have been working here since 1981 and I have dedicated my life to this cooperative producing organic,” a 60-year-old member of ‘Cooperativa Agricoltura Nuova’ (‘New Agriculture Cooperative’), tells IPS. The cooperative extends for hundreds of hectares, only 10 km from the centre of Rome, and exclusively produces organic products.

“Our cooperative is a reality already on its feet, it does not need to be built from the ground up,” he adds. “What worries me – and worries us all in here – is in fact the generational turnover: for the most part we are old people – over 50-60 years old – working here. There are no young people working here, they don’t want to.”

The fear of the farmers, breeders and beekepers working there, is that this area will one day die, because there will be no one able to manage all the activities that the Cooperativa Agricoltura Nuova deals with today.

“I am terrified by this perspective,” Davide Pastorelli, one of the very few young people working in this cooperative, told IPS. Pastorelli is only 30 years old and has been working at Cooperativa Agricoltura Nuova for 10 years, managing the production of milk and cheese. He frequently has to train people who come to work, but who they usually only stay for a short time and leave.

“Many young people are simply not willing to work hard in the farmlands, this is the reality,” he said. “If there were not many migrants and many disabled, who stay here relatively for a long term working for us, I would not really know how we could move forward.”

Cooperativa Agricoltura Nuova is an ‘integrated cooperative’, which means that it promotes a policy of integration within it, and this explains the presence of migrants and disabled people with mental illnesses. “By law, we should have at least 30 percent of disabled people among our workers while instead there are many more,” explains Letizia, a member of the Cooperative.

Perspectives: “Italy still has a long way to go”

Based on the positive data raised above by the FSI, Italy is on track, but at the same time it should not underestimate any challenge, either in the short or in the long-term. For example, Italy’s score in the nutritional pillar of the FSI was only moderate, with some high scores within the ‘life quality’ and ‘life expectancy’ categories, let down by weak indicators within the dietary patterns category. In particular, indicators like ‘physical activity’, ‘number of people per fast food restaurant’ or ‘policy response to dietary patterns’, have not so enviable scores compared to other countries, making the nutritional pillar the one which surely Italy must keep the most under observation.

What should not be underestimated is also the goal of reducing food waste and raising awareness in terms of dietary patterns. Italy, through a deep-rooted attention to the quality of food and tradition linked to the ‘Mediterranean diet’ – identified as the most balanced by nutritionists around the world – is at the top of the world for longevity, scoring 89.10 out of 100 on the FSI. “However,” warned Bazzana, “it is true that, especially in the new generations, there is a risk that these good eating habits linked to the Mediterranean diet, will be lost to the advantage of less balance food models, borrowed from bad habits and imported behaviours.”

“In the 130 researches attached to the ‘Manifesto for Food and Health’, a document edited by the Navdanya International organisation, and which aims to be a useful tool for all those who want to start a transition towards a more sustainable paradigm, many of the critical issues highlighted, closely concern Italy,” said Cavazzoni.

“The fact that today the food is bought canned and inundated by a “shrewd” marketing at the supermarket, has separated what is the knowledge about food from what is its nutritional function, which very often is poor,” said Cavazzoni. “And instead, we have to recover these steps”.

He said that the crucial point of the discussion is that biological consumption must become something ‘popular’, which means ‘of the people’.

“That does not mean massified and trivialised. “We must favour disintermediation, that is, to get producers close to consumers as fast as possible, along the food chain. And we must revive the farmers’ markets because industrial production and supermarkets not only are they damaging small producers, but they are also compromising the quality itself of our food,” said Cavazzoni.

“Connecting consumers and producers, without giving up on the issue of quality and on that of the maximum price of food. This is the crucial point on which we must work.”