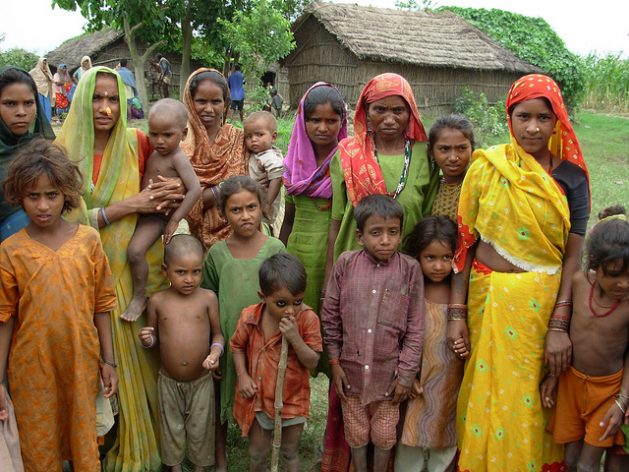 Poor dietary intake and lack of food varieties affect huge numbers of children, who mostly hail from large, impoverished families in Nepal. Malnutrition is a significant concern in Nepal as around one million children under 5 years suffer from chronic malnutrition and 10 percent suffer from acute malnutrition. Credit: Naresh Newar/IPS

UNITED NATIONS, Oct 4 2018 (IPS) - A dramatic shift in the way we eat and think about food is more urgent than ever to prevent further environmental degradation and an even larger health epidemic.

A diverse group of experts from academia, civil society, and United Nations agencies convened at the sidelines of the General Assembly to discuss the pervasive issue of food insecurity and malnutrition and potential solutions to overhaul the system.

“Sustainable food choices is starting to both look good and taste good which hasn’t been the story of the past.” -- founder of EAT Gunhild Stordalen

“It’s striking that we are still, despite all the advances we have seen in science and technology, we still have this big gap between those who eat too much and those who don’t have enough food to eat,” Barilla Centre for Food and Nutrition Foundation’s head of media relations Luca Di Leo told IPS.

At the same time, and perhaps paradoxically, obesity rates have rapidly increased over the last decade from 11.7 percent in 2012 to 13.2 percent in 2016. This means that in 2017, more than one in eight adults, or over 670 million people, in the world were obese.

Adult obesity and the rate of its increase is highest in North America, and increasing trends can now also be seen across Africa and Asia.

Participants at the International Forum on Food and Nutrition stressed the need to deal with both forms of malnutrition, and pointed to the lack of access to healthy food as the culprit.

“It’s not just what’s in the food, it’s what’s in the discourse about food…there is more than one way to eat badly,” said director of Yale University’s Prevention Research Centre David Katz.

However, many noted that there is a lack of a unified, factual consensus on what constitutes a healthy diet from a sustainable food system.

“Without goals to mobilise collective action, and also no mechanisms to either coordinate nor monitor progress, it is really hard to achieve large-scale system change,” said founder of EAT Foundation, a science-based global platform for food system transformation, Gunhild Stordalen.

Katz echoed similar sentiments, stating: “You will never get there if you can’t agree where there is…we must rally around a set of fundamental truths.”

Among these truths is the need to overhaul the entire food and agricultural system.

Despite the notorious and shocking findings from the 2004 ‘Supersize Me’ documentary, the consumption of unhealthy processed foods and sugar has only increased.

According to the Barilla Centre for Food and Nutrition’s Food Sustainability Index (FSI) 2017, the United States had the highest sugar consumption out of 34 countries in 2017.

The average person in the U.S. consumes more than 126 grams of sugar per day, twice the amount that the World Health Organization (WHO) recommends for daily intake.

This not only leads to increasing obesity rates, but it has also contributed to a rise in levels of cardiovascular diseases and diabetes.

“The number of lost years to nutritional deficiencies and cardiovascular diseases has been going up very sharply in the United States,” said Leo Abruzzese from the Economist Intelligence Unit, which develops the index.

“One of the U.S.’ less impressive exports has been bad nutrition…people aren’t necessarily dying but they are living pretty miserable lives. Under those circumstances, wouldn’t you think there has to be something done?” he told IPS.

The FSI also found that the U.S.’ consumption of meat and saturated fat is among the highest in the world, contributing to unhealthy diets and even climate change.

However, Stordalen noted that delivering healthy and sustainable diets is within our reach.

Alternatives to meat have taken many countries by storm, and could slowly transform the fast food and meat industries. Consumers can now find the ‘impossible burger,’ a meatless plant-based burger, in many restaurants and fast food chains such as White Castle.

Recently, the U.S.-based vegan meat companies Beyond Meat and Impossible Foods was recently honoured by U.N. Environment with the Champions of the Earth award.

“Sustainable food choices is starting to both look good and taste good which hasn’t been the story of the past,” Stordalen said.

“Once people get the taste of better solutions, they not only start craving but even demanding  a better future. They come together to make it happen,” she added.

The FSI is also a crucial tool to guide governments and policymakers to pay attention to progress and weaknesses in their own country’s food systems.

“By collecting all of these [indicators] together, we essentially have a framework for what we think a good food system would look like,” Abruzzese said. 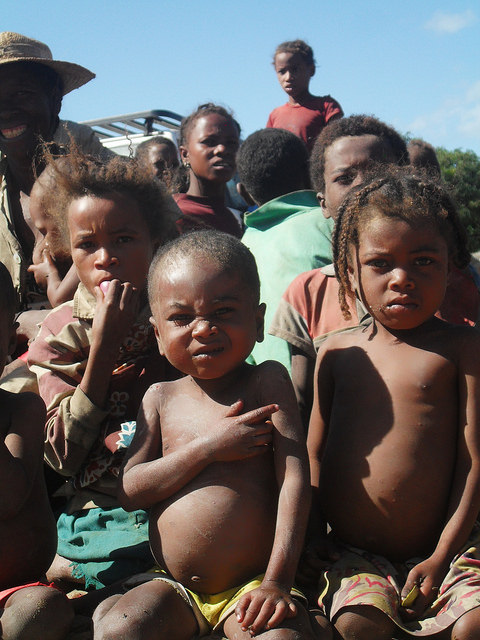 In some African countries even though there is enough food, it is the type of food that is available that counts. In Malawi, for instance, even though families had increased access to maize, nearly half the children are malnourished. In this dated picture, these children from south Madagascar are malnourished. Credit: Miriam Gathigah/IPS

A Problem of Power

The lack of access to healthy food and its consequences can also be seen at the other end of the food value chain: producers.

Women account for up to 60 percent of agricultural labour across Africa, yet still have poor access to quality seeds, fertiliser, and mechanical equipment. At the same time, they often look after the household, taking care of children and cooking meals.

Such gender inequality has been found to contribute to poorer household nutrition, including increases in stunting among children.

Forum participants highlighted the need to empower women farmers and address the gender inequalities in agriculture in order to advance food and nutrition security as well as establish sustainable societies.

“The opposite of hunger is power,” said University of Texas’ research professor Raj Patel, pointing to the case of Malawi.

In Malawi, more than half of children suffer from chronic malnutrition. The harvesting of corn, which is the southeastern African country’s main staple, is designated to women who are also tasked with care work.

One northern Malawian village tackled the issue through the Soils, Food, and Healthy Communities Project and achieved extraordinary results.

Alongside actions to diversify crop, the project brought men and women together to share the workload such as cooking together and involving men in care work.

Not only did they achieve gender equality in agriculture, the village also saw dramatic decreases in infant malnutrition.

Fixing the food and agricultural system is no easy task, but it has to be done, attendees said.

“We know what the problems are, we’ve also identified the potential solutions…and the main solution is each and every one of us,” Di Leo told IPS.

One of the key solutions is education and empowering people to be agents of change.

For instance, many do not see or know the link between food and climate change, he added.

In fact, a 2016 study found that there was a lack of awareness of the association between meat consumption and climate change and a resistance to the idea of reducing personal meat consumption.

“It’s a kind of change that needs a bottom-up approach,” Di Leo said.

Stordalen echoed Di Leo’s comments, calling for a global ‘dugnad’—a Norwegian word describing the act of a community uniting and working together to achieve a goal that will serve them all.

“The state of the global food system calls for new collaborative action,” she said.

“It’s time to officially ditch the saying that ‘the more cooks, the worse soup’ because we need everybody involved to serve our people and planet the right future.”