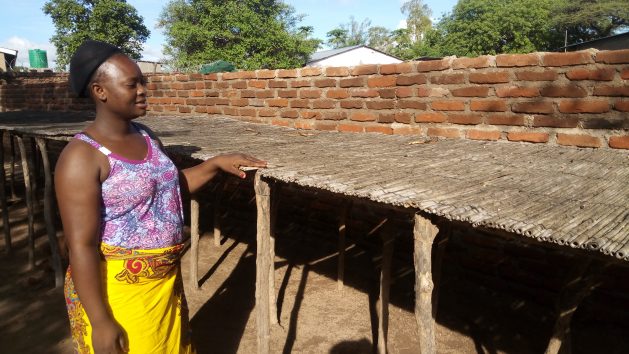 Judith Twaili shows where she used to dry the fish catch when business was better. Credit: Mabvuto Banda/IPS

MANGOCHI, Malawi, Dec 21 2018 (IPS) - Lake Malawi, Africa’s third largest lake, provides an economic lifeline to many fishing families. But overfishing is affecting many of these lives, with women being affected the most.

The lake, also known as Lake Nyasa in Tanzania and Lago Niassa in Mozambique, has the largest number of endemic fish species in the world — 90 percent out of the almost 1,000 species of fish in the lake can’t be found anywhere else in the world.

The Ministry of Agriculture, Irrigation and Water Development estimates that fishing contributes about four percent to Malawi’s gross domestic product (GDP), and that it employs about 300,000 people.

However, that is probably not the case now because fish stocks in the lake have been dwindling over the years due to over-fishing and women are the hardest hit.

Judith Kananji’s life-changing story tells it all. Kananji who is from a fishing family in Micesi Village Traditional Authority Mponda, in the lakeshore district of Mangochi, says she has in the meantime stopped purchasing fish because the trade is no longer lucrative compared to in previous years.

“The problem is that the fish is no longer found in abundance and it’s only the small fish available at the moment and it’s expensive. Unlike before we were having bigger fish which was easy to make profits. This time around it is hard to purchase small fish to sell at a higher price,” she told IPS.

According to the Southern African Development Community (SADC), protocol report, “Years ago, it was the norm to catch about 5,000 fish a day, but now, fishers catch about one-fifth of that, or even as less as a mere 300 fish a day.”

Kananji said that the increase of fishing vessels on the lake has negatively contributed to depleting fish levels because there is stiff competition among the fishermen, which is leading to overfishing.

But SADC also said, “The rapid drop in Lake Malawi’s water levels, driven by population growth, climate change and deforestation, is threatening its flora and fauna species with extinction.”

Kananji said: “Sadly it is us women who buy fish from fishermen who have been pushed out of business because fishermen in most cases raise their prices to meet operating costs whenever there is a small catch.”

“This works to our disadvantage because fish prices at the market are always low,” she added.

Mbatata is, however, in more trouble. She is currently struggling to settle the loan.

The dwindling fish is not only affecting businesses but also the protein intake in a country where the United Nations International Children’s Emergency Fund says around 46 percent of children under five are stunted, 21 percent are underweight, and four percent are wasted and Micronutrient deficiencies are common.

“Chambo [the famous local fish] used to be the cheapest source of protein for us but now it’s now a luxury we only can afford at month-ends. Imagine a single fish going at K1 800 (2.4 dollars)?” said Angela Malajira, a widow of four from Lilongwe’s Area 23 suburb.

To reverse the trend government and fishing communities have found sustainable ways to harness the industry by setting up some rules and empower chiefs to implement them.

Every year, the government prohibits fishing on the lake from the month of November to December 31 to allow breeding to take place.

Interestingly this has been well received, without any resistance, from fishing communities because they understand the importance of increasing the fish levels in the lake.

Instead the communities have formulated their own bylaws outlawing fishing from November to March —  extending the fishing for 5 months.

Vice Chairperson for Makanjira Beach Village Committee Malufu Shaibu said the fishing communities agree that fishing on the lake should shut down for a long time because it has shown that the move can help to improve fish levels on lake.

He explained that during the past five months, assessment has shown that there are more fish species and volume that have started to be seen on the lake as opposed to when the lake was closed for two months
only.

“We want the lake to be closed for six months. We are glad that now we have a lot of fish due to the prolonged time of breeding which we gave the fish,” said Shaibu.

“Our children will now be able to see fish the way we saw them. The benefits for closing the lake for a long time are more than the disadvantage.”

But Shaibu, like Kananji, complained that commercial fishermen are derailing their efforts to improve fish stocks.

Mangochi District Fisheries Officer Thomas Nyasulu said that an office they are working with the newly revived Fisheries Association of Malawi to rein in on big commercial fishermen on the lake.
He said closing the lake for a long period of time would make their work more easy and fulfilling.

“It is good that the fishermen are suggesting this move. It can really help a lot. On regulating the commercial fishermen, we are working with fisheries association of Malawi in making sure that all big fishermen are following their fishing grounds,” said Nyasulu.

The bylaws are working. In April this year a 40-year-old man was convicted and sentenced to pay a fine of K800,000 (1,095 dollars) or in default serve 60 months imprisonment with hard labour for fishing on the lake when had closed contravening the  fisheries conservation and Management Act.

The Magistrate Court sentenced Kennedy Fatchi of Makawa Village in the area of Traditional Authority Mponda in the district after he pleaded guilty to the charges.

Police prosecutor Maxwell Mwaluka told the court that on March 4, 2018 the chiefs working with the Fisheries Inspectorate in the district came across a commercial fishing company on the lake fishing.

He said the team seized the fishing materials and the convict was charged with three counts which he pleaded guilty to.

“This is the only way we can go back to having more fish in our lake which would inadvertently improve our lives,” said Kananji.