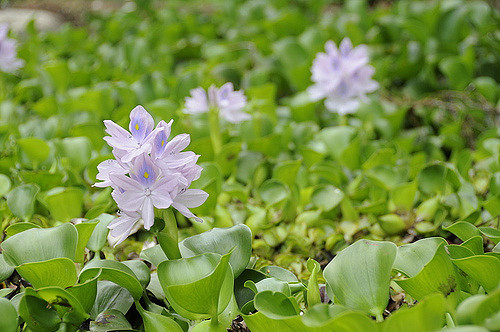 Water hyacinth is a weed and if not controlled on Lake Victoria, experts are concerned that the lake’s water levels might drop by 60 percent. Courtesy: CC by 2.0/Madeira Botanic Garden

KISUMU, Kenya, Dec 19 2018 (IPS) - Currently 30 square kilometres of Lake Victoria, which stretches to approximately 375 kilometres and links Tanzania, Kenya and Uganda, is covered with the evasive water hyacinth that has paralysed transport in the area.

But scientists are harvesting and fermenting the weed, and one intrepid chemistry teacher has built a business out of it.

The presence of water hyacinth on the lake is concerning. Late last year, Margaret Kidany, one of the people involved in conserving Lake Victoria’s beaches, said the lake’s water levels might drop by 60 percent if the weed is not controlled. If it is not eliminated, it will kill the livelihoods of thousands of households that rely on the lake for an income.

However, the Centre for Innovation Science and Technology in Africa, founded by former chemistry teacher Richard Arwa, is making the best out of the invasive water hyacinth.

Funded in its start-up stages by the World Wide Fund for Nature (WWF), the innovation company, which employs six people and serves 560 households, manufactures ethanol from the weed. This is proving a cheaper source of clean fuel for many of the locals while at the same time preserving the lake.

The process they use is a simple one.

The centre hires locals to harvest the hyacinth from Lake Victoria before transporting it to their workshop for processing. Once at the workshop, the hyacinth is pretreated to remove microorganisms that might compete with the enzymes during processing.

The hyacinth is then dried and chopped into smaller pieces to reduce the surface area for efficient processing. The dried hyacinth is then mixed with water, acids and enzymes in tight closed tanks for fermentation.

After fermentation the mixture is subjected to high temperatures (80 degrees Celsius), producing ethanol and carbon dioxide and methane as final products.

“This was part of a science congress project for secondary schools and it won accolades throughout the country and we, together with my students, decided to actualise the project,” says Arwa.

Arwa is still a chemistry teacher even though he started the institution in 2016.

He adds that they initially tried to produce beverage alcohol from the hyacinth but the project was not viable. According to Arwa, alcohol requires numerous purification processes to make it consumable. In addition the taxes on the product are high.

So it is less costly to make ethanol. Arwa says the company produces 100 litres daily.

The amount is considerable for their factory, and it is sold to 560 households in Yala in Kisumu city. Arwa tells IPS that they always run out of stock.

Lyne Ondula, a mother from Yala, in Kisumu county, is a happy customer.

“Hyacinth fuel burns slower than the usual kerosene I use and doesn’t produce smoke and soot while cooking like firewood or kerosene. To me it’s much cheaper and cleaner to use, no more coughing in my kitchen when preparing food,” she tells IPS.

Ondula says a litre of ethanol retails at 70 Kenyan shillings and lasts four days. That is in marked contrast to the higher cost of kerosene, which currently retails at a national average of 100 Kenyan shillings, and lasts only two days. She says she also used to buy charcoal which was quite expensive, retailing at 100 Kenyan shilling per a 15-kilogram tin, which only lasted hours. So now she only uses ethanol, which she pre-orders.

It is a cleaner option for this East African nation that is still heavily reliant on charcoal, kerosene and firewood as a source of energy. According to a market and policy analysis by the German Federal Ministry for the Environment, Nature Conservation and Nuclear Safety, while “LPG has penetrated Nairobi and higher-income households; bio-ethanol can be an attractive clean fuel for lower income households.”

Ondula’s sentiments were echoed by Sylvester Oduor, another resident from Yala in Kisumu County. He adds that ethanol fuel also produces more heat compared to charcoal when cooking.

Philip Odhiambo, energy and climate change coordinator at the WWF, says such innovations are key in harnessing the untapped opportunities of water bodies.

“There is a need to turn environmental challenges to create wealth and opportunities especially in creating jobs for our many unemployed youth,” says Odhiambo. He adds that the ethanol processing project is a viable way of managing green waste that has been a challenge in the country for a long time.

Odhiambo adds that the world is shifting towards clean, cheap energy and says there is a need to embrace creativity and tap into the energy potential of water bodies, besides the traditional sources of energy.

In addition, unlike other clean fuels, bio-ethanol can be produced domestically over time and could spur industrial growth in the sector “while delivering positive social and economic benefits,” says the German Federal Ministry for the Environment, Nature Conservation and Nuclear Safety report.

However, Arwa says accessing the initial capital of 50,000 dollars was a challenge as many financial institutions turned him away for lack of collateral. In the end he had to rely on donors like WWF to finance the project. The chemistry teacher adds that financial institutions did not have faith in the venture and were not ready to invest in the idea.

The immediate goal for the company is to expand production to 600 litres per day.

But Arwa has a five-year expansion plan that includes moving the small factory, which is about 40 kilometres away from Lake Victoria, closer to the lake to reduce costs. He hopes that once relocated, and with the support of partners, they will eventually be able to produce 10,000- 25,000 litres per day.

Arwa adds that he is looking for strategic investment partners to help in scaling up the ethanol project, reiterating that there is a huge untapped market for the product. “I usually feel bad when customers come to purchase ethanol but we turn them away. At the moment we cannot satisfy the demand,” he says.