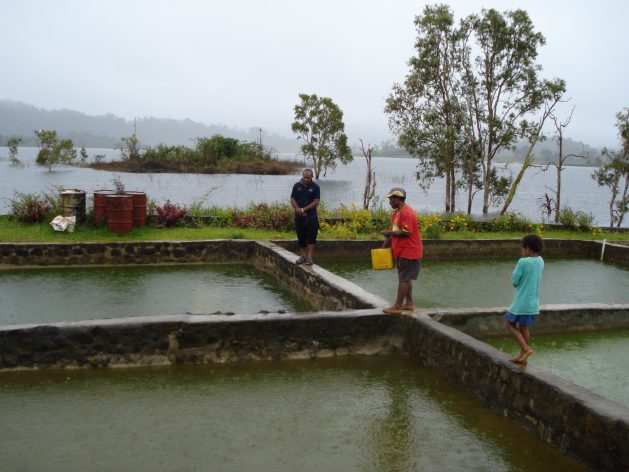 CANBERRA, Australia, Dec 3 2018 (IPS) - In the rugged mountainous highlands of Papua New Guinea in the southwest Pacific Islands fish farming has transformed the lives of former prisoners and helped reduce notorious levels of crime along the highlands highway, the only main road which links the highly populated inland provinces with the east coast port of Lae.

Moxy, who completed his sentence at the Bihute Prison in Eastern Highlands Province ten years ago, has used skills learned during his time in gaol to set up a fish farming enterprise in his village, located 15 kilometres northwest of the Province’s main town of Goroka. Today he is proudly known as ‘Daddy Fish’ in his community where he has regained self-esteem, social status and is sought after for his wisdom and knowledge.

“Whenever I feel down or I am tempted to do wrong, I sit by my fish ponds and look at what I achieved,” he said.

Moxy is one of many inmates who have participated in the Fish for Prisons program, the result of a partnership between Papua New Guinea’s National Fisheries Authority and the Australian Centre for International Agricultural Research (ACIAR). The initiative, begun in 2008, aims to train and mentor prisoners in aquaculture practice so they are equipped for a new livelihood before they are released.  But the training has also made ex-prisoners more disciplined, self-motivated, emotionally resilient and less likely to reoffend.

Aquaculture, while still a relatively under-developed industry in the Pacific Islands, possesses huge potential to help meet future food and nutritional needs in the region, where fish is a major part of the daily diet.

The global average fish consumption rate of 20.2kg per person pales in comparison to the Pacific Islands where consumption is 53kg per person in Papua New Guinea, 85kg in Tonga and 118kg in the Solomon Islands.

Yet for people living in inland areas of Papua New Guinea, far from the sea, protein deficiency is common. It was high levels of malnutrition in the highlands which prompted the introduction of aquaculture into the country in the 1960s, although development of the sector was very slow until recently. A decade ago, there were an estimated 10,000 fish farms in the country, but today the number has jumped to about 60,000 aided by improved research, training programs and outreach support.

Fish farming is as important as ever to combating malnutrition, which remains pervasive among the Melanesian nation’s population of more than 8 million people. The child stunting rate is the fourth highest in the world and children living in the highlands are at greater risk than those living in coastal communities.

The Food and Agriculture Organisation (FAO) claims that, with its multiple nutrients, fish is the optimum single food for addressing undernourishment.  It possesses high quality animal protein, omega-3 polyunsaturated fatty acids, minerals, as well as fat and water soluble vitamins.

But aquaculture is also giving young people in rural areas, where unemployment is as high as 70 percent, the chance to acquire vocational skills, economic self-reliance and sense of achievement.

This has happened in the Eastern Highlands village of Hogu where a criminal band, locally known as a ‘raskol gang’, renowned for car jackings, extortion, robbery and an illegal marijuana racket, had turned the nearby section of highway into the infamously known ‘Barola Raskol Hotspot.’ It was a treacherous place for any motorist or traveller.

But that all changed when fish farmer training was conducted in the village three years ago, gaining the attention of the gang.

“They saw the training being held and came down to see what was going on in their territory. They became interested, were welcomed by the [training] team and eventually participated,” Associate Professor Jes Sammut of the University of New South Wales’ Centre for Ecosystem Science and the fisheries consultant in Papua New Guinea for the ACIAR told IPS.

The program covered all facets of practice, including husbandry, water quality management, building and maintaining fish ponds, producing low cost fish feed and the use of organic fertilisers with the aim of strengthening sustainable food security and household incomes.

After finishing the course, the raskols, aged from 25-47 years, established 100 fish ponds, which now produce tilapia and carp and help to feed the village’s population of more than 680 people. In so doing, they gained an honest livelihood and respect within the community, eventually destroying their marijuana crops and abandoning crime.

Micah Aranka, who works with fish farmers in Hogu, said that “they [the gang] worked hard on digging their ponds and digging canals to draw water to their ponds…..and by watching the fish in their ponds they have found peace.”

In the most populous Pacific Island nation, aquaculture has emerged as an unlikely agent of social change, as well as a more secure food future.