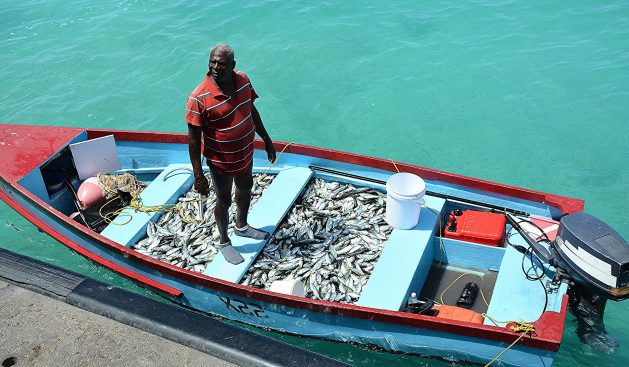 With the high demand for fish by the tourism sector, Barbados imports the majority of the fish consumed here. Credit: Desmond Brown/IPS

CONSETT BAY, Barbados, Oct 24 2018 (IPS) - Allan Bradshaw grew up close to the beach and always knew he wanted to become a fisherman. Now 43 years old, he has been living his childhood dream for 25 years.
But in recent years Bradshaw says he has noticed a dramatic decline in the number of flying fish around his hometown of Consett Bay, Barbados.

“Like in most other places the fishing stock has declined over the years, especially the flying fish,” Bradshaw tells IPS.

As is the case for all Caribbean islands, fishing and associated activities have been integral components of the economic fabric of Barbados for many years. And flying fish, which are common to most tropical seas, are found in the warm waters surrounding Barbados.

In a typical year, flying fish account for around 65 percent of the total fish catch, according to the Food and Agriculture Organisation (FAO) of the United Nations.

Bradshaw says not all of the fish have gone but there is a definite change and this is negatively affecting the industry.

“The mahi-mahi or dolphin, somehow they have increased in numbers but not in size, in the sense that we have a lot more abundance but smaller ones. There is a lot more juvenile fish around,” Bradshaw says.

He argues that the government needs to step in to save the industry from further collapse. 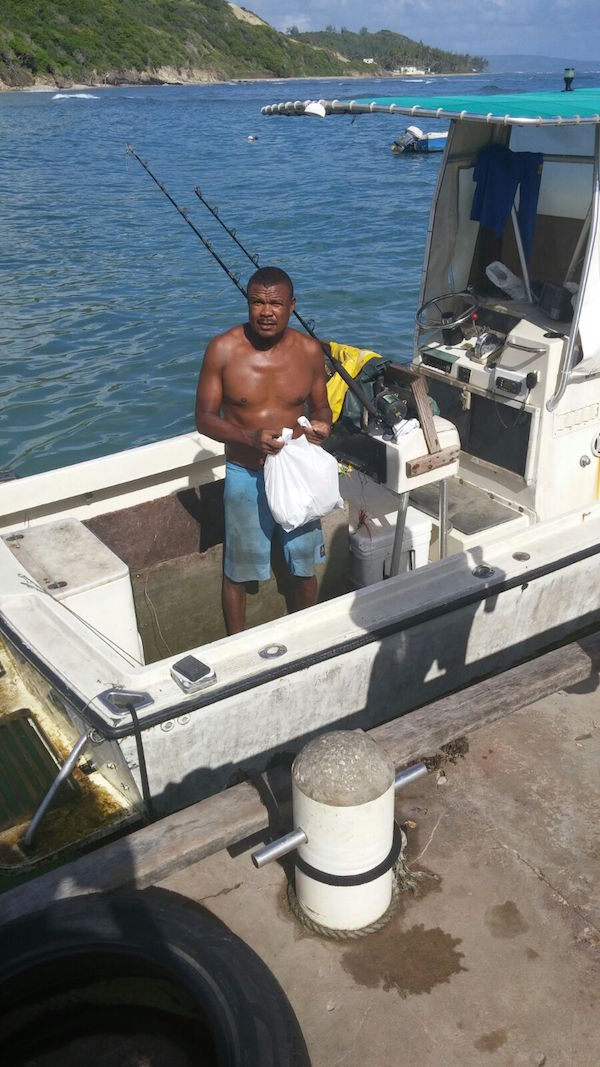 Allan Bradshaw says he has noticed a dramatic decline in the number of flying fish around his hometown of Consett Bay, Barbados. Courtesy: Desmond Brown

Four years ago, there were just over 1,000 vessels registered and 2,200 fishers involved in harvesting with 6,600 people working in associated businesses – market vendors, processors, traders etc. – according to information provided by the FAO office in Barbados.

FAO reported that approximately 2,500 metric tonnes of fish were caught between 2013 and 2014, and noted that the catch appears to have been going down in recent years.

Flying fish catches have been shrinking due to the influx of Sargassum seaweed.

Barbados mainly exports high-value tuna (approximately 160 metric tonnes) and the exports have been marginal in comparison to the catches.

But with the high demand for fish by the tourism sector, Barbados imports the majority of the fish consumed here.

Since taking office in May this year, the new administration of Prime Minister Mia Mottley has heeded calls for Barbados to look beyond the island’s 166 square miles of land for sources of wealth. The suggestion is that the island needs to look beyond its traditional sugar and banana industries to the sea to develop an economy there.

Mottley has included a Ministry of Maritime Affairs and the Blue Economy (MABE) within her administration, a decision hailed by many. Some have recommended that this ministry should be replicated further afield in the Caribbean.

“FAO supports development of the Blue Economy in Barbados through providing assistance over the coming year for both the fisheries and aquaculture sectors,” Regional Project Coordinator at FAO Dr. Iris Monnereau tells IPS.

“This will be achieved through updating legislative frameworks, assessing the feasibility for utilisation of rest raw material from fish processing for direct human consumption, animal feed or fertiliser, training of 70 small-scale farmers in aquaponics, capacity building of fisherfolk and fisherfolk organisations, and providing assistance to implement sustainable value adding activities throughout fisheries value chains.”

In this approach, oceans and coasts can be seen as “development spaces” whereby traditional uses (e.g. fisheries and aquaculture, transport, ship building, coastal tourism and use of offshore oil and gas) are combined with new emerging sectors (e.g. bioprospecting, marine renewable energy and offshore mining) while at the same time addressing the challenges the oceans and coasts are facing.

MABE was only developed after the elections, on May 24, and Monnereau says it is too early to measure changes.

However, she says that with this move, the government is clearly indicating they would like to develop the Blue Economy in Barbados.

Over the past few months, the government has been actively seeking partnerships with FAO and other international organisations and private partners to develop Blue Economy activities.

The move comes as Kenya is set to be co-host, along with Canada and Japan, the first global Sustainable Blue Economy Conference from Nov. 26 to 28. The high-level conference will bring together over 4,000 participants who support a global agenda to build a blue economy much in the way Barbados wants to.

Meanwhile, Minister of MABE Kirk Humphrey tells IPS he wants to see a greener and bluer Barbadian economy. This, he explains, will involve the island becoming the centre for seafaring across the Caribbean, an end to overfishing, and greater protection mechanisms put in place to guard the coral reefs.

He further expressed concern that Barbados presently imports 80 percent of the fish consumed locally, and that the sector is affected by overfishing.

He explains that the ministry was presently in the process of building out its strategy, and there was a desire to capitalise on the island’s sea space, which was 400 times greater than its land space.

In terms of the blue economy, Humphrey also stressed the need for a baseline study, so that Barbados could ascertain what is in its oceans and then assign a value to these assets so as to be able to measure the contribution to Gross Domestic Product.