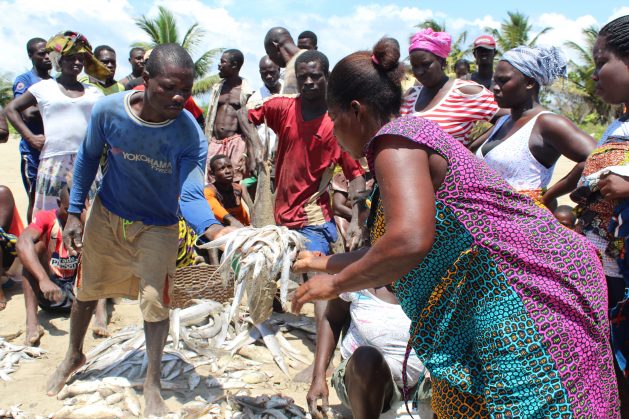 A fish catch has come in. Since the community from the Sanwoma fishing village have begun restoring the mangroves, the lagoon has seen a marginal increase in fish stock. However, the stock in the ocean remains depleted. Credit: Albert Oppong-Ansah/IP

ACCRA, Dec 20 2018 (IPS) - It was just three and a half years ago that the Sanwoma fishing village, which sits between the sea and the mouth of the Ankobra River on the west coast of Ghana, experienced perpetual flooding that resulted in a loss of property and life.

This was because the local mangrove forests that play a key role in combating the effects of coastal erosion and rising sea levels had been wantonly and indiscriminately harvested. “Of a total 118-hectares mangrove, we had depleted 115 hectares,” Paul Nato Codjoe, a fisherman and a resident of the community explains.

The fisherfolk here depended heavily on the Ankobra wetland mangroves for cheap and available sources of fuel for fish processing. Wood from the mangroves was also used as material for construction, and sold to generate income.

But a video shown by officials of Hen Mpoano (HM), a local non-governmental organisation, helped the community understand the direct impact of their indiscriminate felling.

And it spurred the fishfolk into action. Led by Odikro Nkrumah, Chief of the Sanwoma, the community commenced a mangrove restoration plan, planting about 45,000 seeds over the last three years.

Rosemary Ackah, 38, one of the women leaders in the community, tells IPS that the vulnerability to the high tides and the resultant impact was one of the reasons for actively participating in the re-planting.

HM, with support from the United States Agency for International Development-Ghana Sustainable Fisheries Management Project (SFMP),provided periodic community education about the direct and indirect benefits of the mangrove forests.

In Ghana, there are about 90 lagoons and 10 estuaries with their associated marshes and mangrove swamps along the 550-km coastline stretch.

Dr Isaac Okyere, a lecturer at the Department of Fisheries and Aquatic Sciences, University of Cape Coast, explains to IPS in an interview that the conservation of mangrove forests is essential for countries like Ghana, where the marine fishery is near collapse, with landings of important fish species at 14 percent of the record high of 140,000 metric tons 20 years ago.

The fisheries sector in Ghana supports the livelihoods of 2.2 million people — about 10 percent of the population.

Carl Fiati, Director of Natural Resource at the Environmental Protection Agency speaking in an interview with IPS, explains: “Ghana is in a precarious situation where many of the stocks are near collapse and species like the sardine and jack mackerel cannot be found again if we do not take steps to conserve, restock and protect them. A visit to the market shows that sardines, for instance, are no more.”

The Sanwoma community is not unique in the degradation of their mangroves. According to Okyere, the Butuah and Essei lagoons of Sekondi-Takoradi, the Fosu lagoon of Cape Coast, the Korle and Sakumo lagoons of Accra and the Chemu lagoon of Tema are typical examples of degraded major lagoons in the country.

“Most of the lagoons, especially those located in urban areas, have been heavily polluted within the last decade or two.” Domestic and industrial effluent discharge, sewage, plastics, and other solid waste and heavy metal contaminants (lead, mercury, arsenic, etc.) from industrial activities are blamed for this. 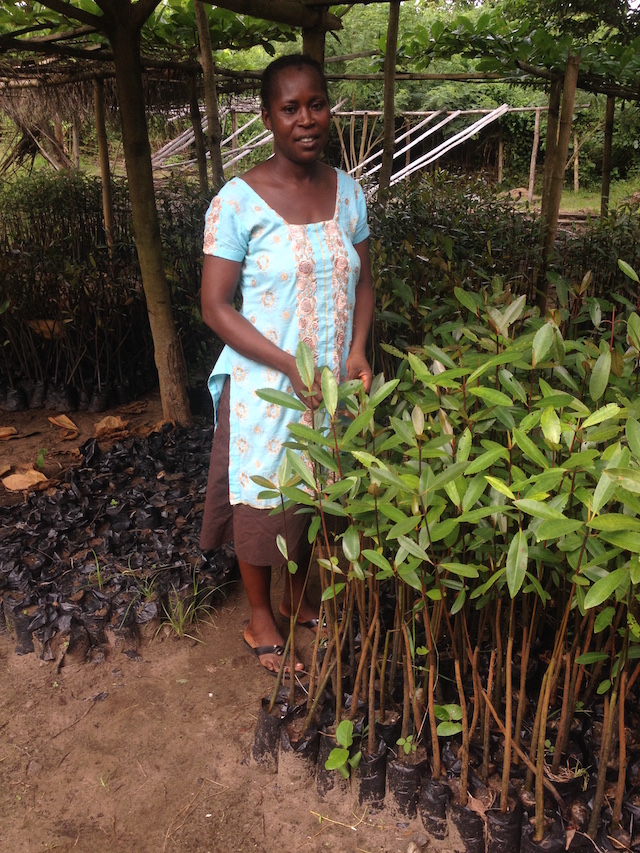 Rosemary Ackah is part of the women’s group that was assigned to collect seedlings used to grown a nursery of mangrove trees. Credit: Albert Oppong-Ansah/IPS

According to Ackah, many of the women in the community also became involved in the mangrove regeneration because of the positive resultant effect of clean air that would reduce airborne diseases in the community.

“As women, we take care of our husbands and children when they are ill so we thought we should seize this opportunity to engage in this as health insurance for our families,” she added.

Ackah says the women’s group was assigned to collect seedlings used to grown a nursery. They also watered the seedlings.

“We also played a significant role during transplanting. When our husbands dig the ground we put in the seedlings and cover the side with sand. It is a joy to be part of such a great replanting project, that will help provide more fuelwood for our domestic use,” Ackah told IPS.

Codjoe says that thanks to the technical assistance from the project, the community developed an action plan for restoration and is also enforcing local laws to prevent excessive mangrove harvesting.

The community has taken control of its future, and particularly its natural resources, and has established the Ankobra Mangrove Restoration Committee to guide and oversee how the mangrove is used and maintained.

To ensure that the re-planting is sustainable, Codjoe explains that the community has, in agreement, instituted a by-law that all trees within 50 meters of the river must not be harvested. Anyone doing so will have to replant them.

It is uncertain if indiscriminate felling of the mangroves continues to happen as many in the community acknowledge the positive results of the re-planting.

“We have seen positive signs because of the re-generation, the flooding has been drastically reduced,” says Ackah.

She has witnessed another direct improvement: the high volume and large size of the shrimp, one of the delicacies in Ghana, that they local community harvests. “This has really boosted our local business and improved our diet,” she says.

Codjoe says the fish stock in the river increased and agreed that a high volume of shrimp was harvested.

Ackah adds that the project donors SFMP and local implementer HM also helped them reduce dependence on the mangroves for their livelihoods and created a resilience plan in the form of a Village Savings and Loan Scheme.

The scheme, she explains, has financially empowered members to address social and economic challenges they face, thus reducing dependence on fisheries and mangroves in terms of the need for income.

This is according to an Assessment Report on the state of biodiversity in Africa, and on global land degradation and restoration, conducted under the Intergovernmental Platform on Biodiversity and Ecosystem Services (IPBES).

Fiati says that Ghana’s new draft Coastal and Marine Habitat Regulation policy, which encapsulates the protection, management and sustainable use of mangroves, will be ready and sent to the Attorney General’s Department this month to be signed into law.

And the local fisherfolk of Sanwoma are assisting in sharing their experiences and knowledge.

In the meantime, the Sanwoma are ensuring that the importance of the preservation of their mangrove forests is passed down to young people.

“Because of a lack of knowledge about the importance of such a rich resource we were destroying it. And it was at a fast rate. Now I know we have a treasure. As a leader, I will use it to sustainably and protect it for the next generation. Also, I will make sure I educate children about such a resource so they will keep it safe,” Nkrumah told IPS.