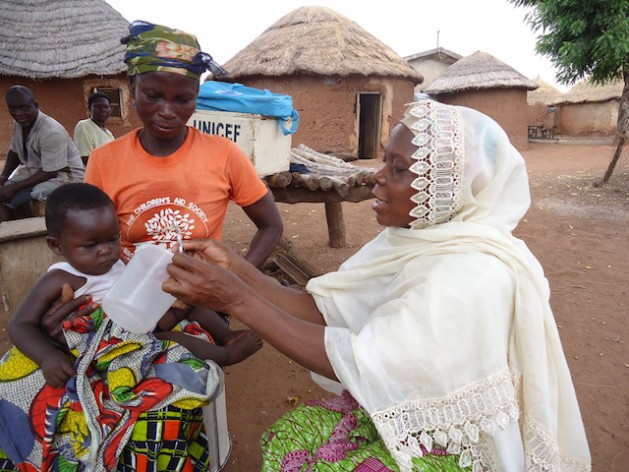 Now, instead of making the long journey to a crowded health centre, mothers bring their sick children to Abubakar. When she sees children with symptoms of sweating, weakness and a high temperature she’s able to differentiate between a case of pneumonia and malaria. She’s also able to correctly treat and provide medication for these illnesses.

“Since these CBVs started working in this community the health of children here has improved. We no longer record deaths.” -- chief of Kpilo, Mahama Abdullah

“In a situation like that I bathe the child and then I dissolve one tablet of amodiaquine in a small clean cup and give it to the child to drink,” Abubakar tells IPS.

She then provides the mother with medication. “In order that the medication is administered at the right time, I do a follow-up to ensure that the child is given the drug,” she adds.

Abubakar is one of 16,500 community-based volunteers (CBVs) trained by the Ghana Health Service (GHS) to manage common childhood diseases in their communities which lack access to healthcare facilities. GHS also supplies them with medication to treat these illnesses. While medication is free, most people pay about 20 cents as a token payment for the drug administered.

This rural health initiative, called the Integrated Community Case Management (ICCM), is supported by the United Nations Children’s Fund (UNICEF) and is funded by the United States Agency for International Development.

Since 2007, volunteers from the four provinces here that have limited healthcare facilities — Northern, Upper East, Upper West and Central Regions — have been trained to reduce the high rate of child mortality. Pneumonia, diarrhoea and malaria account for two out of five child mortality cases. 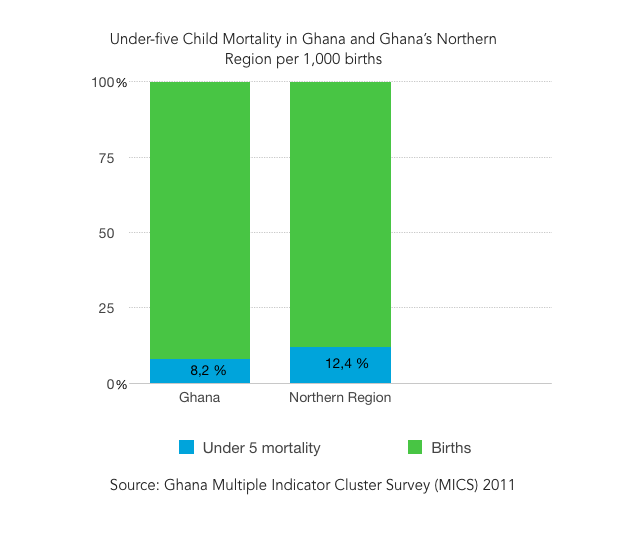 Alhassan Abukari, ICCM assistant project coordinator in GHS’s Northern Regional Health Directorate, says they are unable to provide medical care to most communities due to lack of resources and personnel.

In Ghana’s Northern Region it was harder to provide services, Abukari says, because communities are hard to reach and usually are cut off because of flooding during the rainy season.

“A sizeable number of people in peri-urban communities of the region do not have access to health facilities so these volunteers are really bridging the very wide gap that existed,” he tells IPS.

“We seriously lack personnel; for instance in the case of a community in Saboba district in the Northern Region of Ghana, there is only one community health nurse taking care of 20 communities and she is supposed to visit these communities,” he says.

The CBVs promote health literacy and behaviour during house-to-house visits. During the visits Abubakar explains the importance of exclusive breastfeeding, sleeping under a mosquito net, and washing one’s hands with soap. She refers all severe or complicated cases to the nearest health facility.

Abubakar and the other volunteers are not paid for their work. But, she says, she feels happy saving lives. She says she is motivated by the fact that every child belongs to the community and it’s her passion to serve the community.

According to UNICEF, community management of childhood pneumonia could result in a 70 percent reduction in under-five mortality.

ICCM believes that malaria can also be reduced through the initiative. It is estimated that malaria-specific under-five mortality can be brought down by 40 to 60 percent, and severe malaria morbidity by 53 percent.

Abukari says that the timely intervention of these volunteers, who serve as “doctors” in their various communities, has helped prevent cases of child deaths.

Ayishetu Hamdellah, a widow and mother of four, from Kpilo says having Abubakar around is a huge assistance. It means she no longer has to walk long distances to get treatment for her one-year-old son, Inusa, who used to contract malaria frequently.

Now, Inusa is able to receive immediate treatment if he gets malaria.

The chief of Kpilo, Mahama Abdullah, tells IPS that initiative is so successful he would like it extended to include treatment for adults as well.

“Since these CBVs started working in this community the health of children here has improved.

“We no longer record deaths.”