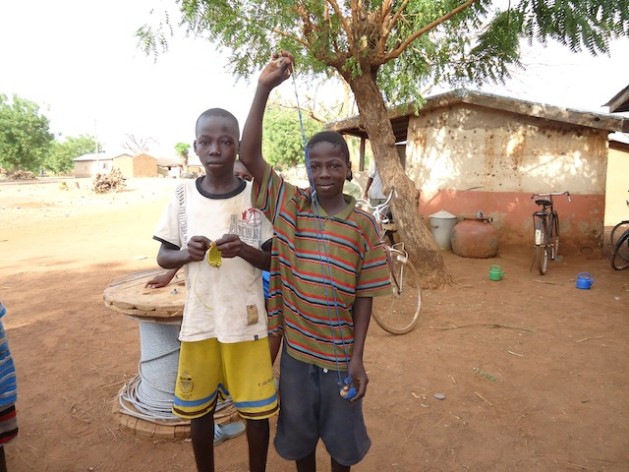 Musah Razark Adams, 13, (r) shows the sling shot that he uses to hit birds with when he works in a local rice field. Adams and his brother, Seidu, 15, (l) work to so that they can pay for school materials and levies. Credit: Albert Oppong-Ansah/IPS

WUBA, Northern Ghana, May 30 2013 (IPS) - It is a school day but 13-year-old Musah Razark Adams, a Grade 5 primary school pupil in Wuba, northern Ghana, is standing in a rice field wielding a “koglung” – a sling shot to hit birds with.

He is not being a naughty boy. For a month of working from 7am to 6pm he is paid 10 dollars and given a 25-kg bag of rice or maize for every half hectare of land he protects by scaring the birds away.

Adams and other pupils like him have to engage in the arduous task popularly known in northern Ghana as “Away” – which means keeping birds from feeding on paddy farms. And this is usually done during school hours.

Schooling is nominally free in this West African nation, though each school charges its own additional costs. And children, ironically, are employed in “Away” in order to pay these additional school levies, such as Parent Teachers Association fees, and to buy school materials.

“Although I feel ashamed forcing the children to engage in ‘Away’, I have no alternative means of getting money to care for them.” -- Iddrisu Adams

“When school started this year I asked my father to give me money to buy my educational materials and he told me to do what other people do to acquire the necessary items for school. He said he did not have money. So I have to do this (scare away birds) because all our farm produce has been sold to take care of feeding our family,” Adams tells IPS.

He dreams of being able to earn money for shoes and his basic educational needs – a school uniform, books and pencils. But right now, that seems like a far-fetched dream, since he does not have the 60 Ghana Cedi or 30 dollars to pay for them.

“Away” is a common cultural practice in Ghana’s Northern, Upper East and Upper West Regions that keeps children out of school for at least a month from April to May, and then again from August to September.

Adams’ father, Iddrisu Adams, 45, has five other children and tells IPS that he is not financially stable enough to provide for them, which is why his sons engage in “Away”. Adams’ 15-year-old brother, Seidu, also works to scare birds.

“Although I feel ashamed forcing the children to engage in ‘Away’, I have no alternative means of getting money to care for them,” he says.

Robert Owusu, a rice farmer in Nyanpkala, Northern Region, tells IPS: “If people are not stationed to man the farm throughout the day the birds will eat the entire rice paddy.”

“Currently we don’t have any other method of scaring the birds although we know the children’s education is at stake,” he says, adding that adults are not employed to do this, as their labour is too expensive.

Though parents do not see it as being against the law, this practice is part of the many instances of child labour in northern Ghana.

The International Labour Organisation (ILO) defines child labour as work that deprives children of their childhood, their potential and their dignity, and that is harmful to their physical and mental development. This includes work that interferes with their schooling.

The Department of Social Welfare, Department of Children and ILO have initiated measures over the years to reduce child labour here, but they say these strategies are hampered by poverty in many communities.

Sanday Iddrisu, acting northern regional director for the Department of Children, tells IPS that the Children’s Act of Ghana states that no child should be deprived of access to education and prohibits parents and other individuals from subjecting a child to exploitative labour.

“Basically both international and national regulations are against such practices that expose children to this form of labour, which prevents them from having an education as any ordinary child,” he says.

He adds that many of the campaigns embarked on by his department and the Department of Social Welfare have proved futile. He says parents of children who work often use poverty as an excuse, stating that they cannot provide for their children’s needs without making them work.

While there is a National Plan of Action for the Elimination of Child Labour in Ghana, a survey by the Child Protection Unit at the Department of Labour says the nation has done little to eradicate the practice. About 1.27 million children between the ages of five and 17 in this country of 25 million people are engaged in activities classified as child labour, Emmanuel Otoo, an ILO representative in Ghana, tells IPS.

“Our focus and resources must now be on the operationalisation of the details of the many international and local conventions and laws Ghana has ratified, including the ILO Convention, the African Union Charter on the Rights and Welfare of the Child, the Ghanaian Constitution and the Ghana Children’s Act of 1998,” he says.

“Children need six universally-accepted teacher-student contact hours. And if they are kept out of class due to ‘Away’ they will miss out on all that has been taught,” he tells IPS.

Adams’ principal, Abdul-Salam Hamza Fataw, says children who engage in the practice are not able to follow lessons to their logical conclusion because of their absenteeism.

Fataw says that during “Away”, between April and May, a class of 50 children shrinks to about eight.

Umal Mohammed Farhim, the Kumbungu District Circuit supervisor of the Ghana Education Service (GES) in the Northern Region, tells IPS that children have the right to an education.

“Available statistics from Wuba Primary School for instance indicate that last year less than 40 percent of students passed their end of term exams,” he says.

A formal report will be sent to the GES head office in Tamale, the Northern Region’s capital, if a behavioural change approach for the next academic year fails to address the issue.

However, Afua Ayisibea Ohene-Ampofo, a project manager of the Northern Ghana office of the International Fertilizer Development Center, a public international organisation that addresses food security, tells IPS that the practice may not end due to its cultural dimension. She says the issue of child labour is closely linked to traditions that see no issue in encouraging children to work to meet their needs.

Ohene-Ampofo, who has worked as a development officer on various projects in the region for the past 10 years, says the poverty which was making parents force their children to continue the vicious cycle of “Away” could be reduced if parents were equipped with alternative livelihood skills such as bread baking, fashion designing, bee keeping or soap making.

Until then, Adams has to continue working.

“My dream of becoming a teacher may be dashed if I don’t support myself like this. I feel shy and bad engaging in such work, but I have to do it to secure my future … I don’t have a choice.”