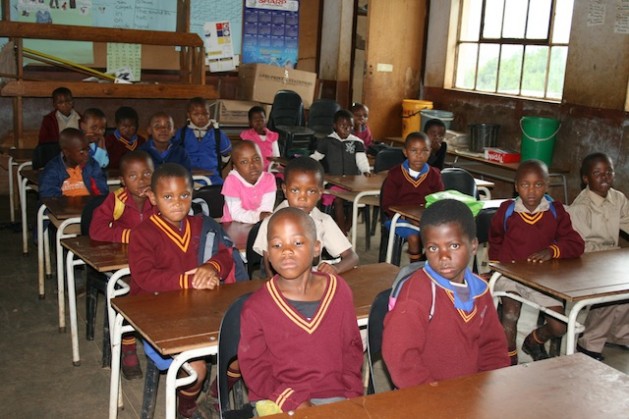 The Swazi government has asked principals of public primary schools to return an annual top-up fee that they have been charging pupils since the Free Primary Education Programme (FPEP) was introduced in 2009. Credit: Mantoe Phakathi/IPS

MBABANE, Feb 18 2013 (IPS) - As the Swazi government struggles to guarantee a no-cost nationwide primary school system, it finds itself sparring against school principals over the question if it is a lack of funds or an abundance of corruption that is standing in the way of its success.

Most recently, the government has asked principals of public primary schools to return an annual top-up fee they have been charging their pupils, without government authority, since the Free Primary Education Programme (FPEP) was introduced here in 2009.

It is a request that some principals have refused, saying it could bankrupt many schools in this southern African nation. One principal, who asked for anonymity, told IPS that it was not feasible to refund parents because the money had already been used to settle bills with suppliers. It is a view shared by the national principals association.

“We’ll run schools as the government wants us to and – if they collapse because of a lack of funds, it’s not our problem,” president of the Swaziland Principals Association (SWAPA), Mduzuzi Bhembe, told IPS. He added that principals were frustrated by the government’s attitude, but he remained noncommittal on when exactly they intend to refund parents.

Schools owe parents an undisclosed amount, estimated to be millions of emalangeni (10 emalangeni is about one dollar), for the annual top-up fees that most of the country’s 558 primary schools charge pupils.

While the additional fees vary from school to school, some parents pay up to 76 dollars per child annually. It is considered a huge sum, as 63 percent of Swazis live below the poverty line of two dollars a day.

Schools charge these fees in addition to the annual 62 dollars per child that the government pays for pupils in grades one to five. The government’s orphan and vulnerable children’s grant programme, in addition, pays schools a higher amount of 219 to 280 dollars for primary and high school children who have registered for it.

But principals argued that the money paid for the free primary programme did not meet their running costs.

According to Minister of Education and Training Wilson Ntshangase, the money was sufficient to pay for stationery, textbooks, feeding schemes and teachers’ salaries.  His ministry is determined to get rid of the extra fees, he told IPS, as they make Swazi school dues exceptionally high.

Now, “There are many children who are idling at home even though the government has paid their fees, because they can’t afford the top-up fees,” Ntshangase told IPS.

“Government heavily subsidises education, yet the cost of education in this country is escalating,” Dumisani Mnisi, Swaziland director for Save the Children, told IPS

She agreed that some schools were operating efficiently with the money that the government paid them.

Regina Masuku’s grandchildren attend one of the few primary schools in the country that does not charge top-up fees.

“I’ve got nothing to complain about – except that they eat beans at school every day,” Masuku told IPS of the Mnyokane Primary School, in northeastern Swaziland.

Meanwhile, Ntshangase admitted that corruption was rife in public schools. The government suspended two principals in December and January, following fraud allegations of funds amounting to over 680,000 dollars.

“Each time we ask for financial statements to justify the school expenditure from principals, they fail to give it to us,” said Ntshangase.

“Principals claim that they draw up their budgets with parents, but the reality is that parents just listen to what the head teacher tells them because the majority of them are uneducated.”

Parents have welcomed the move by the government.

Thandi Mntshali*, a mother of three,  is relieved that she will no longer have to obtain loans from micro lenders in order to pay the annual top-up fees.

“The principal told me that if I refused to pay the top-up fees, then he’d kick my children out of school,” she said.

Mntshali, who sells fruits and sweets at the school her children attend, had no option but to pay 228 dollars in top-up fees for all three of them.

“It was difficult to raise the money, but I had no choice because I don’t want my children to be uneducated like me.”

However, some have labelled the move to scrap the unauthorised top-up fees as a political gimmick by Ntshangase. While absolute monarch King Mswati III rules Swaziland, voters will go to the polls later this year, at a date yet to be announced, to elect Members of Parliament. Political parties are illegal here and not allowed to contest the elections.

Many have also questioned why it has taken Ntshangase three years to instruct principals to stop the practice and return the money already collected.

“Why was he quiet about this since 2009 when he took office?” asked one principal who preferred to remain anonymous.

Ntshangase denied accusations that the move was a political one, saying that the government had previously issued warnings to principals to stop the practice.

“This year we decided to make it formal,” he said.