SWAZILAND: Free Primary Education – If You Can Afford It

MBABANE, Jan 19 2011 (IPS) - The new school year opened with hope – and hunger – in Swaziland this week: an estimated 140,000 orphans and vulnerable children are among the small, eager faces in the mountain kingdom’s classrooms. Poverty and the AIDS pandemic threaten to make an early mark on the next generation. 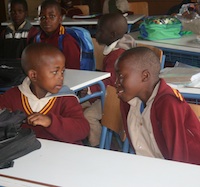 “Besides their not having the proper school uniform, the orphans don’t have warm clothes,” said Zwane Georgina Zwane, a teacher at Motshane Central Primary School.

“It breaks my heart to see them shivering in class on a cold day .

Many of these children also come to school on an empty stomach and it is difficult for them to concentrate in class before they get their meal at school during break time.

This year she has even more to worry about with regards to orphans and vulnerable children because principals have refused to accept OVCs back into class.

This follows a standoff between the Swaziland Principals’ Association (SWAPA) and the Deputy Prime Minister’s (DPM) office, which is responsible for paying fees for the children.

“We’re going to treat them like any of the students – if there is no receipt to prove that they have paid the deposit for the school fees, they wont be allowed into the classroom,” said SWAPA President Charles Bennett.

SWAPA is demanding that the DPM’s office pay the deposit this week or the students will be sent home. Some schools have already turned pupils away.

The hostility between SWAPA and government springs in part from the fact that some children have private sponsorships from individuals and non-governmental organisations.

Masuku said principals have failed to produce a list of privately-sponsored children, instead demanding funds from the government allowing them to collect twice for those students.

A 2008 commission of inquiry into the operation of the OVC grant revealed that some head teachers were indeed squandering government funds aimed at educating vulnerable children. Several principals were arrested, though none have been convicted.

Upon realising this anomaly, the DPM’s office decided to scrutinise all applications to the OVC fund. The process is part of the delay that has infuriated principals.


This is a setback for Swaziland’s pursuit of Universal Primary Education – goal two of the eight United Nations Millennium Development Goals.

Free Primary Education was supposed to be launched in 2008, but a shortage of funding forced its delay. Finally introduced last year, there has been significant improvement in facilities and staffing for 2011. The government has provided mobile classrooms to many overcrowded schools and also hired more teachers.

However, the OVC controversy threatens to overshadow this.

One in four Swazis in the age band from 15 to 49 is infected with HIV; the high death rate of people of reproductive age means a huge number of children are now growing up without parents. Aggravating this, about 70 percent of the one million-strong population lives below the poverty line of less than two dollars a day.

This makes the question of school fees a significant one. Of the 579 pupils at Ngwenya Central Primary in Mbabane, 239 are orphans or vulnerable children in need of government support to pay fees. At neighbouring Motshane Primary School there are 135 OVCs out of 441 students.

“I haven’t sent them back home, but they will not receive any lessons until government pays the deposit,” said Motshane Primary School principal Lucky Zwane. “They’ll just hang around the school.”

He said the school was left with more than $21,000 in debt last year in connection with the OVC Fund.  ”Government pays much less than the budgeted fees and it releases the payments very late in the year and we get into trouble with suppliers,” said Zwane.

While the school charges 1,000 emalengeni – equivalent to $142 – for a Grade IV pupil, the government paid just $78 per OVC in the same class last year. Zwane said the government did not involve principals when working out the amount to be paid for each vulnerable child, and despite protests from school heads refused to budge.

“We received payment from the DPM’s office sometime in October last year and I struggled to run the school with the available funds,” said Zwane. He said the shortfall was crippling schools.

The government’s set rate for OVC students in Grades I-III is also around half what public schools charge other students.

“What’s worse, government is refusing that we ask parents to add onto what the state is paying,” said Zwane.

For this year, the government is promising to pay only a third of the amount as a first-term deposit. Deputy Prime Minister Themba Masuku has refused to commit on when the fees will be made available to the schools.

“I’d say sometime before the 1st of March,” said Masuku. “For now, we’d like to urge head teachers to allow the pupils into class while we sort out the payments.”

Although the government of Swaziland is very near broke, running out of basic materials such as stationery, Masuku said his office was able to set aside $5.5 million to pay school fees for destitute children.

“With this money we can pay deposits to all the schools,” said Masuku. He said government had to re-examine the list of students who had applied for the OVC Fund because some of the children did not qualify.

The government finally released the list of students that it will pay for on Jan. 19, and it contained a surprise: almost all of those who made the list are orphans. The government now appears unwilling to sponsor children who are vulnerable because their parents are out of work.

“Some parents are unemployed, but they can find means of paying school fees for their children,” said Masuku. “The DPM’s office will not pay for such children.”

He said government is working on the Children’s Protection and Welfare Bill 2010 which will spell out precisely which children are supposed to benefit from the OVC Fund. But this will see significant numbers of children who previously had their fees paid by the government sent home.

“We’re undergoing difficult economic crisis and we can’t afford to have people who push their responsibilities to government,” said Masuku.

Critics note that the decision to restrict the scope of the OVC Fund follows a firm recommendation from the International Monetary Fund in November to the government to protect expenditure in education and health despite the financial crisis.