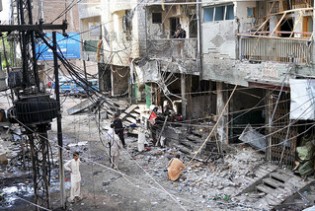 By Jillian Kestler-D'Amours
"It’s tiring," says 15-year-old Ibrahim*, deep lines running across his forehead. "But there is no alternative." Only a teenager, Ibrahim has been working full-time for three years already.

By Catherine Wilson
A new community justice programme being rolled out in Papua New Guinea’s vast village court system is bringing international human rights-based laws to rural communities and boosting the protection and empowerment of women and children.

By Stephen Leahy
In northern Pakistan, one in ten children dies before the age of five from diseases such as polio, measles or hepatitis, despite the availability of vaccines. And while health workers feared visiting this region, which includes the mountainous Swat district controlled by the Taliban until 2009, local people also fear the potentially life-saving vaccines.

By Thalif Deen
The United Nations is rejoicing over the conviction of a former head of state for committing crimes against humanity, specifically involving the recruitment of child soldiers.

By Thalif Deen
The United Nations, which has remained focused on the world's political and military hotspots, has turned its attention to the bigger socioeconomic issues facing adolescents and youth, including poverty, sexual abuse, female genital mutilation and lack of reproductive health care.

By Ashfaq Yusufzai
"We have been spending sleepless nights without electricity and clean water. This place is not worth living in but we have no option and will remain here as long as the military operation continues in our area," said Gul Rahim, a former resident of Bara tehsil in Khyber Agency, currently languishing in the Jallozai refugee camp in the Nowshera district of Pakistan’s Khyber Pakhtunkhwa.

By Inés Benítez
An 80-year-old nun is the first person facing trial in Spain on charges of forming part of a secret network that allegedly stole hundreds of babies and sold them to couples without children.

By Karlos Zurutuza
At Fallujah hospital they cannot offer any statistics on children born with birth defects – there are just too many. Parents don’t want to talk. "Families bury their newborn babies after they die without telling anyone," says hospital spokesman Nadim al-Hadidi. "It’s all too shameful for them."
Next Page »
ADVERTISEMENT ADVERTISEMENT