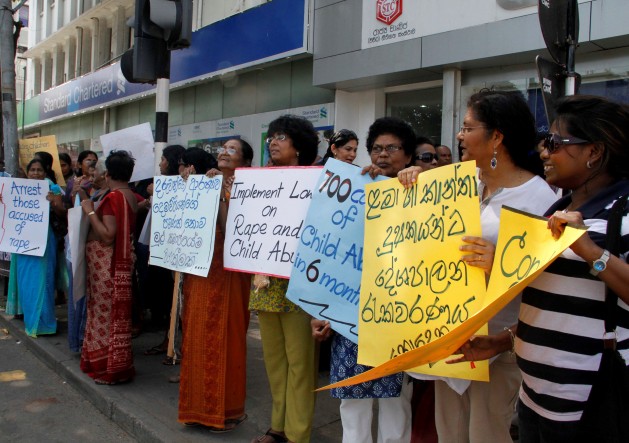 COLOMBO, Jul 23 2012 (IPS) - A spate of child rape cases in Sri Lanka has angered child rights activists and moved the government to consider tightening the relevant laws and making the offence punishable with the death sentence.

A government statement released in parliament in May said that of the 1,450 female rape cases reported in 2011, child rape accounted for 1,169, alerting authorities and activists to a rising trend.

Earlier this month, police said in a statement that over 700 complaints of rape or abuse of children were filed in the first half of the year, and that, on average, at least four cases were  being reported daily.

But, according to the National Child Protection Authority (NCPA), the situation is far worse than what is being reported to the police and the authority estimates that over 20,000 cases of child abuse may  have occurred in the first half of this year.

Among the reasons for such abuse, as reported in the NCPA statement, are insecurity of children, popularity of mobile phones with internet facilities among the youth, access to pornography, increasing substance abuse and lack of sex education.

An October 2011 study of child abuse in Sri Lanka’s north-central region – where unsettled conditions prevail following the end of three decades of armed separatist militancy in 2009 –  showed that 30 percent of the cases were of female minors (below 15 years) having consensual sex with a male partner.

The rest of the cases were attributed to the “strength, power and dominance of perpetrators who could be relatives, teachers or religious dignitaries,” a senior prosecutor at the attorney general’s office told IPS asking not to be named. “While we do our part, society also needs to take a serious look at this issue,” he said.

The trend of powerful people preying on minor girls is not confined to the north and east of the island country. Recently, a 13-year-old girl identified four men, including a local   politician belonging to the ruling United People’s Freedom Alliance (UPFA), of  gang raping her.

Another UPFA politician, the head of the local council in the southern town of Akuressa, is presently in custody for the alleged abuse of a 14-year-old girl.

The Women and Media Collective (WMC), a campaign group, has denounced these alleged crimes, saying Sri Lanka has become a society where “perpetrators of heinous crimes against women and children can live with little fear of the law.”

Responding to such allegations, Tissa Karaliyadda, child development and women’s affairs minister, told reporters earlier this month that he has drawn up plans to tighten the laws that deal with child abuse, including making it punishable with the death sentence.

Authorities are also trying to sharply reduce the time taken – six years on average – to complete a prosecution, and thereby reduce impunity to offenders who often get easy bail.

Dr. Hemamal Jayawardena, child protection specialist from UNICEF, Colombo, said the number of cases appear to have risen due to an increase in reporting centres, particularly in the former war-torn northern region. People are also more sensitive to this issue and coming forward with information, he said.

“But I think there are many runaways (under-age couples eloping) cases and sex with consent which appear in the first complaint (to the police) as suspected rape and provide somewhat misleading data,” he told IPS.

Under Sri Lankan laws, those under 16 years are defined as minors and sex with a minor is considered rape, with or without consent.

A maximum jail term of 10 years is imposed on offenders while the authorities are examining proposals to enforce the death penalty and make it a non-bailable offence.

Under a project assisted by the United Nations Children’s Fund, law enforcement authorities are experimenting with a rapid three-month process involving selected courts across the island to reduce the time taken to dispose cases of child abuse or rape.

Menaca Calyaneratne, director of advocacy at Save the Children’s Colombo office, warns about a new breed of abusers called ‘professional perpetrators’ who are “professionals in their own fields but carefully choose an area of work that gives them unhindered access to children in order to abuse them.”

Fields such as education, sports, childcare organisations and children’s institutions harbour predators such as principals, teachers and sports coaches who are known to abuse their positions, she said,  adding that about 90 percent of child abuse is perpetrated by someone known to the victim.

“We used to tell children to be careful of strangers, but that does not seem to be valid anymore,” Calyaneratne told IPS.

Lack of awareness of sexual and reproductive health among teenagers in villages is a serious problem. At a village, some 75 km north of Colombo, a social worker said there have been at least five cases reported this month of 13-15 year-old girls striking up affairs with 22-year-olds, mostly soldiers, and eloping.

“When there is a problem, the girls come back and the parents file a complaint, it becomes a case of suspected rape,” the worker said asking not to be identified for fear of repercussions.

Sri Lanka which had about 120,000 soldiers in 2008 more than tripled its troop strength in order to defeat separatist militancy and also ensure that there is no resurgence.

Police blame parents for lack of supervision of their children while also citing women working abroad as domestics and leaving the children under the care of a relative as some of the reasons that lead to child abuse.

Sumithra Fernando, director at Women in Need, a non-governmental organisation (NGO) that works with battered women, says parents are often indifferent. “They are busy with their jobs and often unaware of what their children are up to,” she told IPS.

Women’s groups say it is important for fathers to take an interest in the welfare of their daughters.

“It’s a social obligation for the father to share responsibilities,” argues Sepali Kottegoda, director at the WMC. “When a girl is abused it is the mother who is blamed – rarely the father,” she said.

“Sri Lankan society has also become very violent and the situation is such that women and children have become very vulnerable,” Kottegoda told IPS.

Prof. Siripala Hettige from Colombo University, an eminant sociologist,  has a different perspective and links child abuse to young people steadily migrating from the villages to Colombo and other urban centres.

“The vast majority of school-leavers don’t have proper jobs. They come to the city but can’t hold down stable employment. And with the average age of marriage steadily going up from 22 to 28, there are a lot of very frustrated people around,” Hettige told IPS.