UNITED NATIONS, Apr 26 2012 (IPS) - The United Nations is rejoicing over the conviction of a former head of state for committing crimes against humanity, specifically involving the recruitment of child soldiers. 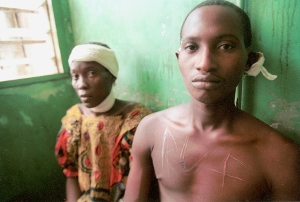 A young man had the letters RUF tattooed into his chest with a razor blade by the local rebel commander of the Revolutionary United Front. Credit: Corinne Dufka/Human Rights Watch

The Special Court for Sierra Leone Thursday found Charles Taylor, a former president of Liberia, guilty of aiding and abetting war crimes, and other grave violations of international law, committed by his rebel forces in the one-time war-ravaged West African nation.

The crimes were committed by the Revolutionary United Front (RUF) during Sierra Leone’s civil war during 1991-2002.

Secretary-General Ban Ki-moon said, “This is a historic and momentous day for the people of Sierra Leone, for the region and beyond.”

“It sends a strong signal to all leaders that they are and will be held accountable for their actions,” he added.

Asked for her comments, Radhika Coomaraswamy, the special representative of the secretary-general for children and armed conflict, told IPS the first case was the judgment last month by the Hague-based International Criminal Court (ICC) of former Congolese warlord Thomas Lubanga.

Lubanga was convicted of war crimes for enlisting and conscripting children under the age of 15 years into his rebel force in the Democratic Republic of Congo in 2002 and 2003.

“We were really happy since we filed an amicus curaie on the law and I gave legal testimony, and the court quotes us extensively- so we really made history on the first ICC case. But there are others as well who have been charged,” she added.

Coomaraswamy said in the case of Lubanga, it sent a clear message for those who enlist, conscript or make children participate actively in hostilities.

And, in the case of Taylor, she pointed out, those who aid and abet those who recruit children.

“These last two months have set the international legal standard in stone and we hope will serve as a strong deterrent to others in recruiting child soldiers,” Coomaraswamy told IPS.

In his statement, the secretary-general said he “deeply appreciates the commitment of the Special Court to ensuring accountability for the very serious crimes committed against the people of Sierra Leone and United Nations and associated personnel during the conflict in Sierra Leone”.

The Special Court for Sierra Leone is an excellent model of a cooperative partnership with the United Nations to bring those responsible for serious international crimes to justice in accordance with international standards of justice, fairness and due process of law, he added.

“It has helped the process of national reconciliation and the restoration and maintenance of peace in Sierra Leone,” Ban said.

Meanwhile, the U.N. children’s agency UNICEF said the verdict against Taylor “is a victory for children recruited and used in war and will serve as a warning to other war-time leaders and warlords”.

At his trial in The Hague, Taylor faced an 11-count indictment including the enlistment, recruitment and use of children under the age of 15.

The prosecution argued that he was one of those bearing the greatest responsibility for crimes committed by rebel forces between 1996 and 2002, according to UNICEF.

UNICEF Executive Director Anthony Lake said for the thousands of children brutalised, scarred and exploited as weapons of war, today’s verdict against Taylor may not wipe out the atrocities they suffered.

“But we hope it will help to heal their wounds,” he added.

UNICEF also pointed out that the recruitment and use of children in hostilities is prohibited under international law, and constitutes a war crime when children are under the age of 15.

Often it is the most vulnerable children who are at risk of becoming associated with armed forces or groups, whether through forced conscription or driven by factors such as poverty, violence, and ideology.

During the civil war in Sierra Leone, UNICEF said it “intervened directly with all parties to rescue children who had been recruited”.

In some cases children who had been branded and scarred by rebel forces received plastic surgery to help them to be accepted back into their communities.

UNICEF also led efforts to release and reunite children with their families and reintegrate children into their communities by providing skills training, education and psycho-social support.

The agency said that children were also used as human shields, sex slaves and as labourers in diamond mines.

After the end of the war, 7,000 children were released and reintegrated into society. Ninety-eight percent were reunited with their families.

Another 7,000 separated children were supported for reintegration, among them girls who had been associated with the rebels.

“Those who exploit children for military gain violate their rights and rob them of their childhood,” said Lake.

“We all should be heartened that grave violations against children are now being successfully prosecuted and perpetrators are being brought to justice,” he said.