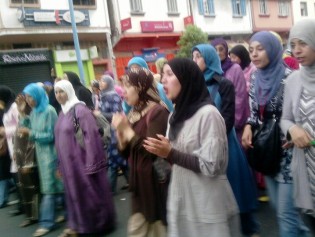 By Abderrahim El Ouali
The Moroccan government’s announcement that it would issue new public media guidelines at the end of May has reignited a stormy debate around independent media in the kingdom.

By Abderrahim El Ouali
Deadly clashes between police and youth in the Northeastern town of Taza last week suggest that, far from bringing change and stability, Morocco’s new government is simply repeating mistakes of the past, stoking tensions and fuelling a spate of protests against the regime.

By Abderrahim El Ouali
When he decided to publicly express his views about Islam, Kacem El Ghazzali had no idea that he was going to be beaten up and his life threatened. In spite of this, he continues his fight from his country of asylum for the freedom of faith in the Islamic kingdom of Morocco.

By Abderrahim El Ouali
Morocco's offer of autonomy to Western Sahara to stave off demands for full independence is boomeranging on the kingdom with other regions now demanding similar freedom.

By Abderrahim El Ouali
Since the beginning of protests in Morocco on Feb. 20 women have been at the vanguard. Many of the spokespersons of the protest movement have been women - observers and activists see this as a new phase of feminine emancipation in this North African country.

By Abderrahim El Ouali
In spite of an amendment to the constitution, early general elections planned next October, and numerous social and economic reforms, the Moroccan monarchy may not survive the Arab Spring, activists say.

By Abderrahim El Ouali
Despite 12 years of reform, Morocco's universities continue to fall short of expectations, with students complaining that the training they get does not meet the demands of the job market.
ADVERTISEMENT ADVERTISEMENT