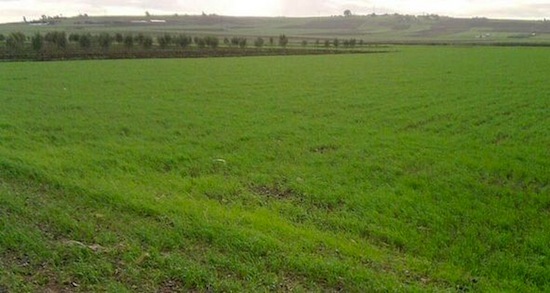 CASABLANCA, Mar 15 2012 (IPS) - An unprecedented cold spell that struck Morocco in February and continues to linger well into March has raised serious questions about the country’s national agricultural development programme, which will fail to achieve its desired results if climate change continues to be mismanaged.

The ‘Green Morocco Plan’ was launched last year with the aim of remedying major obstacles that still hinder development of the agricultural sector, tackling everything from ensuring food security for 32 million Moroccans, to meeting the requirements of European markets, the biggest consumers of Moroccan produce.

However, the Plan does not do a thorough job of diagnosing climate factors, citing only drought, which it considers ‘periodical’, as an impediment to successful farming. The report does not address the sudden and unexpected arrival of cold weather, whose damages have been no less than disastrous.

Last February, more than 8,200 of the country’s 8,700 hectares of potatoes, were ravaged. A further 14,000 of about 21,000 hectares reserved for sugarcane were also blighted by the cold. This is particularly significant since potatoes and sugar are two of Morocco’s primary export commodities.

‘’We have never seen such a degree of cold. All that we worked for was completely destroyed,” Ahmed El Aiboudi, a farmer from the Ouled Frej region, 120 kilometres south of Casablanca, told IPS.

“We were not protected against this icy cold. Nobody expected it,” he added.

Nevertheless, for climatologists, such changes have been inevitable.

Mohammed-Said Karrouk, professor of climatology at Hassan II Mohamedia University and a United Nations expert on climate change, told IPS, “The Green Morocco Plan does not contain any (concrete mention of) management of climate change. All that is considered is the management of water resources, (but what is really needed) is a method for managing the totality of the changes.”

‘Managing the totality’ means especially taking into consideration the abrupt changes of temperature in both directions. “What we used to think of as the exception in the past is actually (now) the rule. The ascents and reductions in temperature are now more frequent than ever,” he explained.

Chemssi Bendriss, a farmer from the Benslimane region who said he had lost more than five hectares of potatoes, always reminds himself of the good old days when Morocco “had four clear seasons in the year.”

The population’s anxiety is justified. Agriculture contributes 19 percent of the country’s gross domestic product (GDP), supports 100,000 jobs in the food-processing industry, and supplies an income to 80 percent of Morocco’s 14 million peasants.

In spite of this essential role, the sector still suffers several setbacks including archaic agricultural practices. According to the ministry of agriculture, the country’s use of fertilisers by hectare is four times less than in France and national mechanisation is eleven times less than in Spain, the kingdom’s Northern neighbour. Meanwhile, the food-processing sector represents only 24 percent of the industrial units in the country.

However, though experts often cite the lack of industrialisation as the main obstacle to resilient agriculture, most farmers tend to take a different view.

“I believe that fertilisers and chemical processes are not what (we need). It would be sensible, on the contrary, to think of organic farming, because this is more profitable for farmers,” Abdelkebir Essaib, a farmer from the Ziyayda region, 80 kilometres Northeast of Casablanca, told IPS.

The Green Morocco Plan did not completely neglect this option. A project to produce organic olives has already been launched in the Southern region of Sraghna, approximately 300 kilometres from Casablanca.

Omar Zaki, a farmer from the region, told IPS, “The project will have a very positive impact on the daily life of inhabitants. It will create wealth and jobs opportunities for the population.”

Still, even organic farming is hindered by difficulties on the ground. The division of more than 70 percent of agricultural land into plots smaller than five hectares, according to the ministry of agriculture, remains one of the biggest problems.

The situation has been aggravated, according to the Green Morocco Plan, by the shortage and the irregularity of rainfall, as well as the decrease of surface and subterranean water supplies caused by an extremely inefficient irrigation system.

However, the question is no longer how to face the lack of rainfall, but rather “to know how to manage (scarcity) and abundance at the same time,” said Karrouk.

“We are more and more exposed to strong inundations during the periods of intensive rainfall. Our infrastructure is not adapted to it. It is not any more a question of redirecting excess water towards the sea, but it is necessary to know how to save it during the periods of abundance to face times of drought,” he explained.

If the effects of climate change constantly escape the attention of Moroccan officials, it is not due to a lack of competence on the part of farmers to make their concerns heard, but to the lack of genuine outreach on the part of the government.

Mostafa Belaadassi, another farmer from the Ouled Frej region, told IPS, “Farmers are not being consulted enough to build up participatory solutions. The actual offices for agricultural advice lack both means and human resources.”

Though the Moroccan government established offices in most main villages to ensure the supply of technical advice years ago, no direct work with farmers has been carried out so far, he added.

Experts too feel that they have been overlooked by the government programme.

“I was never consulted officially by the government, whether during the elaboration of the Green Morocco Plan or (any) other. There were only some attempts to contain my criticism,” said Karrouk, who recently won the prestigious Albert Einstein Prize for his scientific contributions about climate change on the global level.

“This is not a technical matter, but a political and cultural one,” he concluded.