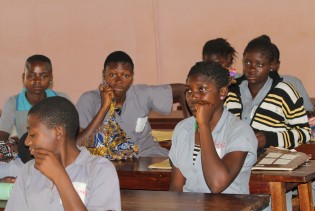 Hard to Stay in Libya, Difficult to Return

By Rebecca Murray
At the battered terminal of Tripoli’s tiny Mitiga airport, over 150 young men and women jostle to be repatriated home to Nigeria on Libya’s Buraq airlines. This journey to Lagos is one of hundreds the International Organisation for Migration (IOM) has facilitated since the start of the uprising against Gaddafi’s regime over a year ago.

By Cam McGrath
Activists across the Middle East are reporting a mysterious toxin, possibly a banned nerve agent, in the thick clouds of tear gas used by security forces to suppress anti-government protests in recent months.

By Karlos Zurutuza
"They would call you a Gaddafist if you drove one of those 4 X 4 cars," says Bashar, emerging from one of those traffic jams in Tripoli. "Today almost every rebel commander has one."

EGYPT: Round One Goes to the Islamists

By Cam McGrath
Islamists appear poised for a landslide victory in the first round of Egypt's parliamentary elections, putting them on track to secure a majority in the country's first parliament since the fall of president Hosni Mubarak.

By Correspondents
Egypt's ruling military council has reportedly asked a former prime minister, Kamal al-Ganzouri, to form a new cabinet. But there are no signs of a let-up in the anti-military demonstrations.

By Julio Godoy
Solar thermal power plants are indispensable to meet Europe’s energy demands and to reduce greenhouse gases emissions substantially, according to a new study by a European scientific commission.

By Karlos Zurutuza
"We’ve walked all the way here to tell everybody that we are being treated like dogs," said 23-year old Hamuda Bubakar, among a couple of hundred black refugees protesting at Martyrs Square in Tripoli. "I’d rather be killed here. I wouldn’t be the first, or the last."

By Karlos Zurutuza
"A crossroads of history, continents and ancient empires; a place where history comes alive through the extraordinary monuments on its shores", reads a well- known tourist guidebook about Libya. It’s all still there, but the tourists aren’t there to see it.

By Karlos Zurutuza
Suleyman and Rasool have come to the University of Bani Walid, in western Libya. If they are lucky they might find some chemistry notes and, perhaps, a computer that works. Unfortunately it is not likely, since NATO reduced the campus to rubble.
Next Page »
ADVERTISEMENT ADVERTISEMENT