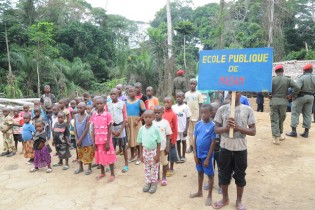 By Ngala Killian Chimtom
It is a sunny afternoon in Boui, a small village in the Boumba and Ngoko Division of Cameroon’s South East Region. A primary school teacher is drawing some wild animals on the blackboard. Then she turns to the class of fifteen pupils.

By Ngala Killian Chimtom
Issah Mounde Nsangou combs his 6.5-hectare Kouoptomo coffee plantation in Cameroon’s West Region, pulling up unwanted weeds and clipping off parasitic plants. For the 50-year-old farmer, the health of his coffee plants are of prime importance.

By Ngala Killian Chimtom
A project to reclaim agricultural land lost to eucalyptus plantations is bearing fruit in Cameroon.

By Ngala Killian Chimtom
Thomas Effiom, a 35-year old fisher in Jabane, a small locality in Cameroon’s Bakassi Peninsula, scoops off floodwaters from the muddy floor of his house. It is a ritual he performs each time the Atlantic Ocean overflows.