YAOUNDE, Jan 30 2015 (IPS) - A video ad is being screened before every match at the Africa Cup of Nations currently under way in Equatorial Guinea. Part of African Football Against Hunger, a joint initiative by the U.N. Food and Agriculture Organisation (FAO) and the Confederation of African Football (CAF), it shows a player dribbling a football, taking a shot and scoring – the winning kick is a metaphor for ending hunger in Africa by 2025.

“Football, like no other game, brings people together, within nations and across country lines. It’s exactly this type of coming together we need to reach the goal of zero hunger in Africa,” FAO Director of Communications Mario Lubetkin told IPS in an online interview. 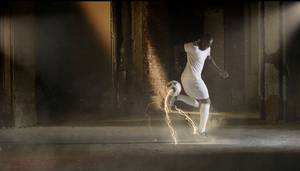 As part of the African Football Against Hunger campaign, a video ad is being featured at matches throughout the 2015 African Cup of Nations tournament in Equatorial Guinea. Credit: FAO

“Our aim is to harness the popularity of football to raise awareness of the ongoing fight against hunger on the continent, and to rally support for home-grown initiatives that harness Africa’s economic successes to fund projects that help communities in areas struggling with food insecurity and build resilient livelihoods,” he explained.

Last year, African governments came together and undertook to wipe out chronic hunger among their peoples by 2025, in line with the United Nations’ Zero Hunger campaign.

Hunger in Africa is pervasive.  In 2014, some 227 million people across the continent suffered from hunger. According to FAO’s 2014 ‘State of Food Insecurity in the World’ report, one in four people across sub-Saharan Africa are undernourished.

“Football, like no other game, brings people together, within nations and across country lines. It’s exactly this type of coming together we need to reach the goal of zero hunger in Africa” – Mario Lubetkin, FAO Director of Communications

And despite its vast fertile lands and a youth bulge, Africa continuous to spend over 40 billion dollars every year on food imports, according to Tumusiime Rhoda Peace, Commissioner for Rural Economy and Agriculture for the African Union Commission (AUC).

“The fact that the continent’s population is growing means that while Africa has made progress in hunger eradication over the last decade, the total number of hungry people on the continent has risen. This brings additional urgency to fund home-grown solutions that allow families and communities to strengthen food security and build resilient livelihoods,” Lubetkin told IPS.

Placing a more direct link between football and the fight against hunger, he said adequate nutrition is essential to both cognitive and physical development and to achieving one’s goals – none of the players in the cup would be able to perform at the level they do without adequate nutrition.

“The human potential that is lost by persistent hunger is still immense. It is in the interest of everybody to join forces to make hunger history. Fighting hunger is a team sport – we need everybody to get involved,” he explained.

It is estimated that over 650 million people worldwide will be watching the African Cup of Nations, which this year sees teams from Algeria, Burkina Faso, Cameroon, Cape Verde, Congo, Cote d’Ivoire, D.R. Congo, Equatorial Guinea, Gabon, Ghana, Guinea, Mali, Senegal, South Africa, Tunisia and Zambia competing for the trophy from Jan. 17 to Feb. 8.

The initiators of the African Football Against Hunger campaign hope that with the enormous number of people exposed to the campaign, more citizens will become engaged in the struggle against hunger.

He went on to explain that football events are also being used to spread the message about the work of the Africa Solidarity Trust Fund for Food Security, which was set up by African leaders in 2013, and to encourage countries to become involved in the Fund as donors, project partners and sources of local knowledge.

So far the Fund has leveraged 40 million dollars from African countries to empower communities in 30 countries by building job opportunities for young people, help them use their available resources better and bounce back quicker in situations of crisis.

FAO and the Fund are complementing the Comprehensive Africa Agriculture Development Programme (CAAADP), a continent-wide initiative to boost agricultural productivity in Africa. Launched by governments 10 years ago, CAADP has been instrumental in bringing agriculture back to the discussion table as a priority sector, according to Komla Bissi, Senior CAADP Advisor at the AUC.

“Our governments are recommitting resources, and it’s time to bring the private sector on board,” he told IPS. He said 43 of Africa’s 54 countries have so far committed to the process; 40 have signed the CAADP compact and 30 of them have developed agriculture sector investment plans.

“The job of eradicating hunger and making food production sustainable is a long-haul game and these ongoing projects – along with future ones – are the seeds of progress in the fight against hunger,” Lubetkin concluded.