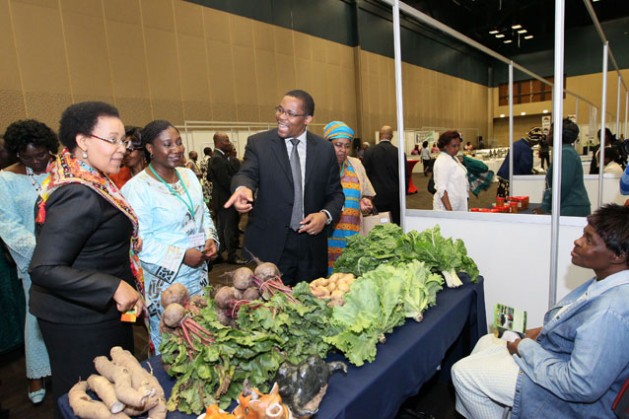 DURBAN, South Africa, Nov 30 2015 (IPS) - Beauty Manake moves around these days with a “million dollar” smile on her face. The 31-year old woman from Botswana now runs a thriving vegetable and livestock farm, as well as an agribusiness consultancy group.

But she hadn’t planned on being a farmer. In 2007, she graduated from the University of Botswana with a degree in Business Information Systems, landing what she describes as “a well-paying job in a company of choice as a systems technologist.” Two years later she resigned when she decided to take the jump and go into farming.

In 2009, Beauty started Kungo Farms, a 35-hectare farm situated 8km from her home village of Bobonong in central Botswana. “I grow vegetables such as tomatoes, sweet peppers and cabbages all year round on a rotational basis,” she told IPS.

She has since extended the estate to include over 250 fruit trees such as mangoes, citrus, plums and litchis. Some 550 km from Kungo Farms, Beauty opened up a beef production cattle ranch of 3,600 hectares called Pii Jena, which means ‘milk borehole,’ in the local Khoisan language.

The ranch now has about 500 cattle and Beauty practices what she calls winner production. “In winner production, we take the calves from their mothers when they are about eight months, then we take them off the veld, and sell them to the Botswana Meat Commission which is our biggest and most lucrative market, and then they continue in the whole value chain of slaughtering and finishing the beef,” she explained.

But Beauty, like many other farmers in dry Botswana, faces significant challenges, with climate change frequently denting her resolve.

“Each and every year, I am hit by something. If it is not heat, it’s frost…this year there was no frost but heat has just hit us right now…It wipes off the whole thing… there is no insurance… Everything dies there and that’s the rest of you. You have to start reinvesting again. Buying new plants, buying new fertilizers, buying everything….It’s amazing and we still go back to it, and the reason why I am still in this business is because I believe there is potential for growth. If people are eating every second, what stops us from making money from it?”

“Now, I’m passionate about it, I live it, I eat it, I do everything to do with farming…for me, walking into a field every day and seeing how green it is, smelling the smell of oranges…it’s therapeutic,” she said.

Beauty Manake won’t reveal her earnings, but admits that she does not regret resigning from her white-collar job. “There is money in agriculture,” she told IPS, simply.

Beauty’s involvement in agribusiness falls in line with persistent campaigns by the New Partnership for Africa’s Development, NEPAD, that sees increased agricultural yields and the development of value chains as the way to go for Africa to achieve sustainable development.

“Agribusiness and agro-industries account for more than 30% of national incomes as well as the bulk of export revenues,” says Estherine Fotabong, the Director of Programs for NEPAD.

With women producing a large portion of the food in Africa, Fotabong believes it is necessary for women to be sufficiently empowered to take advantage of the opportunities agribusiness offers. This, she said should include training, access to finding as well as the provision of inputs.

Fotabong also weighs in on how post-harvest losses, amounting to 40 per cent of the food produced in the continent, can be addressed.

She calls for the construction of roads, storage facilities as well as processing units. “We must seriously address the problem of post-harvest losses if we hope to achieve the targets of Malabo and the Agenda ’63,” she emphasized.

According to the United Nations Economic Commission for Africa, UNECA, the agricultural sector will be key to maintaining Africa’s growth momentum that averaged 5 per cent over the past decade. The Commission projects that if that growth is maintained, “Africa’s GDP should increase approximately threefold by 2030 and sevenfold by 2050, outstripping Asia’s.”

It makes a strong case for transformation in the continent, especially for agricultural products, arguing that this could make for “immediate value addition through commodity-based industrialization that exploits forward and backward linkages with the rest of the economy. Such industrialization could lift many rural dwellers out of poverty while creating jobs across the economy.”

For farmers like Beauty Manake, farming should be a love affair. “If we don’t advocate for ourselves as farmers, as women, nothing is going to change,” she told IPS.