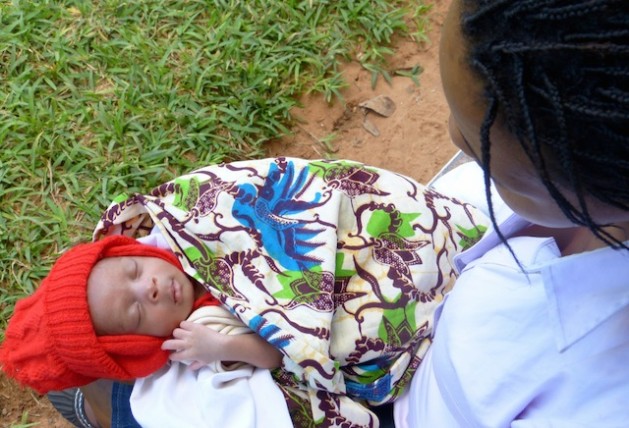 According to an African proverb, “every woman who gives birth has one foot on her grave.” Cameroonians are attempting to make this proverb a historical fact and not a present reality through SMS technology. Credit: Mercedes Sayagues/IPS

YAOUNDE, Sep 23 2014 (IPS) - “You can’t measure the joy in my heart,” Marceline Duba, from Lagdo in Cameroon’s Far North Region, tells IPS as she holds her grandson in her arms.

“I am pretty sure we could have lost this child, and perhaps my daughter, if this medical doctor hadn’t shown up,” Duba says, a smile sweeping her face.

The medic in question is Dr Patrick Okwen. He is the coordinator of M-Health, a project sponsored by the United Nations Population Fund (UNFPA) that uses mobile technology to increase access to healthcare services to communities “when they most need it.”

The World Health Organisation (WHO) recommends that a nurse or doctor should see a maximum of 10 patients a day. But according to Tetanye Ekoe, the vice president of the National Order of Medical Doctors in Cameroon, “the doctor-to-patient ratio in Cameroon stands at one doctor per 40,000 inhabitants, and in remote areas such as the Far North and Eastern Regions, the ratio is closer to one doctor per 50,000 inhabitants.”

Okwen was in Lagdo testing out the SMS system, which was just implemented a few months back, when Duba’s daughter, Sally Aishatou, went into labour.

Okwen and the medical staff at the Lagdo District Hospital received an SMS from Aishatou. She had been in labour for 48 hours with no signs that the baby was about to come.

“What happens when a woman SMSes a particular number, the GPS location blinks on the server, and then the server tries to identify her location, puts it on Google maps; then tells the driver to go there. [The system] also tells the doctor to come to the hospital; tells the nurses to get ready. So everybody gets into motion,” he tells IPS.

Okwen and the ambulance driver traced Aishatou to her home. They found her lying helpless on a mat, almost passed out. By the time the ambulance returned to the hospital, the operation room was ready for her and she was taken into surgery immediately.

Eight minutes later, her 4.71 kg baby boy was born. The midwife Manou nee Djakaou tells IPS: “The joy in me is so great that I don’t even know how to express it. I am so exited; very happy. This system put in place is very efficient. But for this innovation, we stood to lose this baby and its mother.”

Two hours after surgery, Aishatou regained consciousness and named her boy after Okwen.

“Many women are dying from child-birth related issues. Women are dying while giving life. And this is something we are really concerned about, but we also know that with the coming of mobile technology, there is hope for women in Africa,” Okwen says.

“Most of the women in Africa today have access to a telephone. It could be her own, her husband’s own, or a neighbour’s. So if we had a way in which women could reach an ambulance using a phone that would guide the ambulance, it could indeed present hope for African women,” he explains.

Okwen says the project has benefitted “close to one hundred women in terms of information, evacuation, arrangements of hospital visits, deliveries and caesarean sections.”

The project has been dubbed “Tsamounde”, which means hope in the local Fufuldé language.

Mama Abakai, the Mayor of Lagdo, says the project’s impact has been far reaching.

“A lot of our sisters, wives and mothers in rural areas lose their lives and suffer a lot, because there is a communication gap, and a problem of rapid intervention and assistance. With this system, it suffices to send an SMS or a simple beep, and all the actors involved in saving lives are mobilised…its formidable,” Abakai tells IPS.

She says that as a majority of women in the country’s far North Region have little access to healthcare services, the M-Health Project comes as a huge relief.

According to the 2010 Population census, the Far North Region has a population of three million people, 52 percent of whom are women.

“We look forward to using this technology in other parts of the country,” she tells IPS.