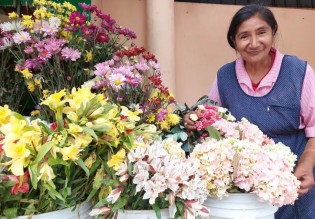 By Mariela Jara
Latin America and the Caribbean is no longer a young region and it will be one of the regions with the largest aging populations by 2050, which poses great challenges due to the social inequalities the countries face, but also opportunities to overcome them.

By Samira Sadeque
A little over half of women across the globe are able to freely make choices about their sexual and reproductive health, according to a latest report based on data from 57 countries.  However, as much of the world has gone into lockdown because of the coronavirus pandemic, with countries implementing social distancing and restricting the free movement of people, experts are concerned that even this small gain in sexual and reproductive health may suffer negatively.

A Key Role for 1.8 Billion Youth in UN’s 2030 Development Agenda

By Thalif Deen
The UN Population Fund (UNFPA) is convinced that the world’s 1.8 billion adolescents and youth-- a quarter of the global population—have a key role to play in helping implement the UN’s 2030 Development Agenda.

By Tharanga Yakupitiyage
Young people around the world are facing increasingly insurmountable, persistent barriers as they try to achieve their full potential and secure a prosperous future. However, Central Asia and the Asia-Pacific have already begun working to ensure that no one is left behind.

By Tharanga Yakupitiyage
It has been five decades since the international community affirmed the right to family planning but women still remain unable to enjoy this right, which is increasingly under attack around the world.

By Amna Khaishgi
Experts on population ageing converged in Seoul this week to discuss how to make reaching one's "golden years" a happy and sustainable process across the world.

By Tharanga Yakupitiyage
The demographic dividend: though not a new concept, it is one of the major buzzwords at the UN this year. But what does it really mean? There are 1.8 billion young people between the ages of 10 and 24 around the world, the most in the history of humankind.

By Tharanga Yakupitiyage
The U.S. has withdrawn all of its funding to the UN Population Fund (UNFPA), an agency that works on family planning and reproductive health in over 150 countries.

By Thalif Deen
The UN Population Fund (UNFPA), which has played a key role in ensuring maternal health and promoting reproductive rights of millions of women world-wide, is expected to suffer over $140 million in funding cuts by Western donors this year.
Next Page »
ADVERTISEMENT ADVERTISEMENT