Stories written by Marty Logan
Marty Logan is a Kathmandu-based journalist and creator of the podcast Nepal Now. During most of his career, working in Canada and Asia, he has focused on issues of development, global health and human rights, including Indigenous peoples’ affairs. He has been writing and editing for IPS since 2001 and has also worked as a journalist with the Canadian Press and Reuters news agencies, and as a freelancer for outlets including The Globe and Mail, Nepali Times, The New Humanitarian and The British Medical Journal. | Twitter | 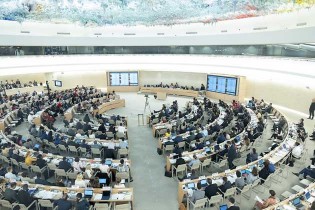 By Marty Logan
A 2021 World Bank-financed project in Uganda was supposed to help communities to sustainably manage local areas and to cope with the impacts of Covid-19. But at one site, the Toro Semliki Wildlife Reserve, the funding emboldened the Uganda Wildlife Authority. A government body, and the project’s implementing agency, the UWA has long prevented indigenous communities from reclaiming their land near the wildlife reserve.

More Students on the Move in an Increasingly Complex World: Podcast

By Marty Logan
This is our third episode on the ongoing movements of people around the world. You can listen to the previous ones, the first about climate migrants and the second on remittances, on any podcast app.

By Marty Logan
When Canada and Nepal are used in the same sentence it’s usually because the former is supporting development efforts in the latter. Not when it comes to feeding children at school.

Migrant Workers’ Remittances Fund Development-Make It Easier for Them: Podcast

By Marty Logan
I hope you had a chance to listen to our last episode, Environmental disasters creating more migrants within countries. We talked about the rising number of people who are forced out of their homes because of climate or environmental disasters. Nearly 30 million men, women and children in 149 countries were displaced in 2020, temporarily or for good and the signs are, that those numbers will only grow.

Nepal Investing in Health Care but Equality of Access Lags

By Marty Logan
As the omicron wave of Covid-19 rose ominously in Nepal recently, to entice more people to get tested the government reduced the cost of PCR tests from 1,000 rupees ($8.37) to 800 rupees ($6.70) in government facilities and about double that in private ones.

By Marty Logan
In the final months of 2021 you likely saw countless media reports of migrant men, women and children getting blocked at borders trying to enter various countries. Two flashpoints were the Mexico-US border and the border between Poland and Belarus, but there were many others.

By Marty Logan
2020 was a year of tremendous upheaval. The murder of George Floyd, followed by global Black Lives Matter protests, Covid-19 and the stark light that the pandemic shone on inequality within countries and between the global north and south, protests and brutal repression after elections in Belarus, ongoing demonstrations for climate action led by youth around the world, to name just a few.

By Marty Logan
Do you think it’s possible to transform communities that are stagnating from a lack of currency into places where people’s income-generating activities create a vibrant, self-sustaining circular economy?  It is in parts of Kenya that are using the community currency Sarafu, according to today’s guest.

By Marty Logan
Footage of flames engulfing bodies at makeshift funeral pyres and stories of people dying in cars as drivers desperately raced from hospital to hospital seeking a bed. These scenes marked the second wave of the Covid-19 pandemic in India just months ago.

By Marty Logan
It is easy to be cynical about recent reports of actions taken to end chhaupadi, the traditional practice in parts of western Nepal of segregating menstruating women.
Next Page »
ADVERTISEMENT ADVERTISEMENT