The United States is withdrawing all of its funding from the UN Population Fund (UNFPA) after claiming without evidence that the agency supports coercive abortions in China. UNFPA, which does not provide support for abortions anywhere, says that U.S. funds actually helped it to prevent some 295,000 unsafe abortions in 2016 by supporting voluntary family planning. IPS takes a look at one of the other ways the UNFPA is working to reduce abortions, by addressing gender-biased sex selection. 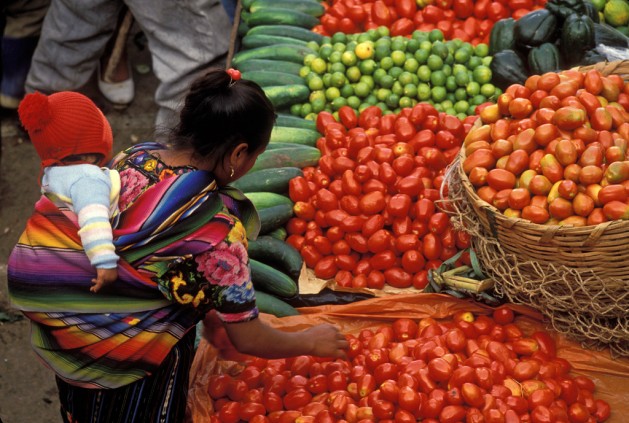 UNITED NATIONS, Apr 7 2017 (IPS) - When Bimla Chandrasekharan saw that women who gave birth to baby girls were being sent out of the house by their angry husbands and mothers-in-law she realised a basic biology lesson was needed.

“We start educating them on this XY chromosome,” Chandrasekharan who is Founder and Director of Indian women’s rights organisation EKTA told IPS. “(But) we don’t say XY chromosome, we do it with tomatoes and limes. ‘Tomato tomato’ it becomes a girl, ‘tomato lime’ it becomes a boy.”

It is just a start but this lesson helps to show fathers that they in fact determine the sex of their children.

According to the UN Population Fund (UNFPA), there are now 117 million girls who are ‘missing’ worldwide because of sex selective abortion and infanticide.

The problem ballooned in India and China in the 1990s, partly due to increased access to ultrasounds. But according to the UNFPA the problem has also now spread to new regions including Eastern Europe and South-East Asia.

A new UNFPA program to address the problem in Armenia, Azerbaijan, Georgia, Viet Nam, Bangladesh and Nepal will draw on the experiences of both India and China in addressing the problem.

“The evidence we have (of what) what really works is changing social norms and gender norms that under-value girls and at the same time giving opportunities to girls and women.” -- Luis Mora, UNFPA

“What we have seen over the last three decades is that the practice that initially was considered a sort of exception in China and India … has moved to other countries.”

Yet while the increase in sex selection has coincided with access to technologies like ultrasound, both Mora and Chandrasekharan agree that banning ultrasounds alone won’t fix the problem.

“In a patriarchal society there is always a preference for a male child,” says Chandrasekharan.

This is why EKTA challenges patriarchy and teaches mothers and fathers why they should want to have daughters just as much as they want sons.

Some of the reasons why sons are preferred over daughters are economic. In India parents have to pay a dowry for daughters. In many countries only sons can inherit property, daughters cannot.

But there are other reasons too.

As Chandrasekharan points out, some mothers fear bringing daughters into a world where they are likely to experience sexual harassment and abuse, a lifetime of unpaid housework, and marriage as young as 12 or 13.

Chandrasekharan, is an active member of a national campaign called Girls Count, which aims to fight sex selection in India, and receives funding from both UNFPA and UN Women.

She says that within Girls Count there are “two streams.”

“One stream of people believe in strict enforcement of the law,” says Chandrasekharan, “The other stream is challenging patriarchy, I belong to that stream,” She adds that she also believes in the law, but doesn’t think that laws alone work.

As Chandrasekharan points out India’s Preconception and Prenatal Diagnostic Technique Act was introduced in 1994, banning prenatal scanning and revealing the sex to parents, yet this law has not stopped sex-selective abortions.

Yet Chandrasekharan is also careful to say that challenging patriarchy doesn’t mean that her organisation is anti-men. Patriarchy is a system, she says that has consequences for both men and women, but mostly benefits men.

“We are not against you as an individual we are talking about a system,” she tells the men and boys she works with.

Mora also agrees that it is not possible to end sex selection without addressing gender inequality.

“The evidence we have (of what) what really works is changing social norms and gender norms that under-value girls and at the same time giving opportunities to girls and women.”

This includes giving rights, equal access to education, employment and land, says Mora. “These are the practical things that make a sustainable change.”

This is also why EKTA introduces role models to the community, to show that not all women will spend their lives doing unpaid housework.

EKTA’s most recent role model came from the local community herself. At a young age she met a family member who told her that she had flown to meet them by plane.

Even though the girl came from a marginalised Dalit family, she told her family that she wanted to be the ‘engine driver’ of a plane, since she didn’t yet know the word for pilot.

Last year, says Chandrasekharan, she became a full-fledged pilot and returned to speak to the community as part of EKTA’s role models program.

UNFPA’s new program in the six selected countries is funded by the European Union, however many other UNFPA programs are now in jeopardy, after the United States’ decision to withdraw all of its funding from the agency on Monday.

IPS spoke to Chandrasekharan during the annual UN Commission on the Status of Women.