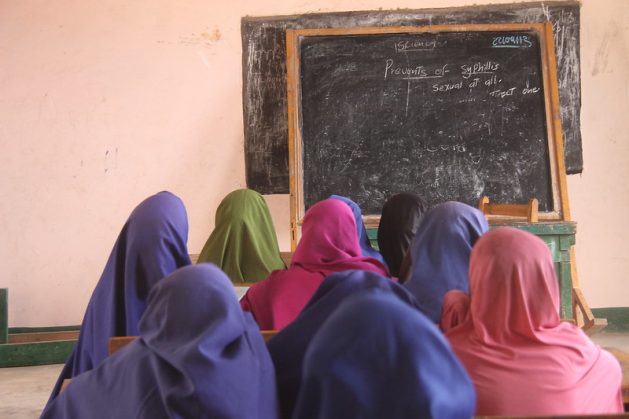 Studies have shown that the longer a girl stays in school, the less likely she is to be forced into child marriage. With many schools currently shut down and girls are not going to school, an increase in child marriage is expected. Credit: Ahmed Osman/IPS

UNITED NATIONS, Jul 3 2020 (IPS) - An additional 5.6 million child marriages can be expected because of the coronavirus pandemic, which resulted in a short-term increase in poverty and the shutdown of schools.

The current pandemic is also expected to have a massive impact on the projected growth of harmful practices on women’s bodies.

According to a recent report released by the United Nations Population Fund (UNFPA), titled “Against My Will: State of World Population 2020”, an additional two million cases of female genital mutilation (FGM) will occur by 2030.

Other contributing factors include people’s inability to go to work, which in turn is affecting livelihoods. In such circumstances, some parents might feel encouraged to marry off their daughter as it’s one less mouth to feed or because they believe it might be safer, Kollodge said.

It is significant then that this year UNFPA began its 10-year agenda to end harmful practices by 2030 in every country. IPS spoke with Tharanga Godallage, a results-based management advisor at UNFPA, on how the current pandemic affects this agenda and how it exacerbates the crises of FGM and child marriage across the world. Inter Press Service (IPS): You report says, “Getting to zero harmful practices will require much faster progress. It demands a society-wide effort, where everyone who has a role in stopping these practices steps up to do so.” What steps can different actors in a society take to address this issue?

Tharanga Godallage (TG): The “harmful practices” are a multi-stakeholder commitment because no single stakeholder can solve this problem. It’s actually not only a country level problem — they exist across borders. For FGM in particular, cross-border stakeholder advocacy is really important.

In the eradication of FGM, and overall, the most important factor is strong political commitment from the government. The second one is law enforcement because we need to create new laws and policies if you really want to have sustained change.

The third one is the involvement of multiple ministries, because this is not a single-ministry show. The approach is to have the whole government involved.

Our observation and recommendation is to look at it in a more holistic way, especially the sustainable change.

There’s also the need for a change in social norms, which is the most critical and the most difficult as well. That’s why you need a huge advocacy campaign.

Social norm is the root cause of most of these cases, and that needs community level engagement, including leaders, who have a bigger role to play, and formal and informal community leaders.

And then there’s a socio-economic link to child marriage, and FGM, and son preference. We need to bring the policy makers and stakeholders together and have all these translated to policy change.

IPS: Your report says “If the pandemic causes a two-year delay in FGM-prevention programmes, researchers projected that two million female genital mutilation cases would occur over the next decade that would otherwise have been averted.” Can you break down how such a delay would lead to two million lives affected?

TG: Based on the historical trend and projections, we knew that the estimated FGM cases by 2030 without COVID-19 impact would be around 34 million.

Then we looked at the reduction of scale-up programmes and the new cases to determine how many cases those adjustments would lead to, and we projected 36 million.

IPS: What factors are you counting when accounting for this change in the projected number owing to COVID-19?

TG: The restrictions on group gatherings and travel have reduced availability of technical staff and delay of starting international programmes or prevention programmes.

Usually we know increased poverty has 32 percent impact on child marriage, it’s very closely related. Hence, because of the economic factor, and the short-term poverty increase because of COVID-19 that was factored into the modelling, there will now be an additional 5.6 million child marriages.

IPS: Your report says “Ending harmful practices by 2030 in every country and community—an objective of UNFPA, will require rapid changes in mindsets that still sanction violence against women and girls and deny their rights and bodily autonomy.” How has this target been affected by the pandemic, and how do you aim to go forward in these circumstances?

TG: So far we have done our internal analysis of overall challenges. So, community mobilisation related research is going to be a very big challenge especially as we are trying to see how to [address that], especially the commitments relating to community mobilisation like social norms change and the comprehensive sexual education programmes (i.e.informal education). Those kinds of programmes will be heavily affected, and data generation is going to be a challenge.

People are used to the new normal now and people have come up with alternative strategies: call centres, telemedicine, and e-meetings. These are new innovative alternatives so maybe over time we might come to a new normal in our approaches to address these issues.