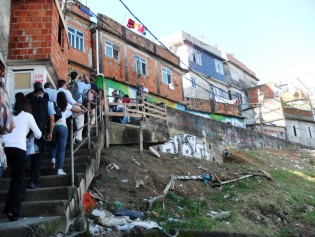 By Jenny Ricks
With New Year’s resolutions already fading fast for most people, attention turns to what 2016 will really hold. And so it is for those wanting to tackle the world’s biggest problems.

By Emilio Godoy
While most of Latin America has been reducing poverty, Mexico is moving in the other direction: new official figures reflect an increase in the number of poor in the last two years, despite the billions of dollars channeled into a broad range of programmes aimed at combating the problem.
Next Page »

As the international community takes stock of the progress over a decade and a half of Millennium Development Goals, rising inequality is the black cloud that hovers over achievements worth celebrating, when the world debates a development agenda beyond 2015. While inequality between countries has declined, many nations have seen a rise in the rift between rich and poor within their borders. Not infrequently, inequality is compounded by a lack of sound governance that allows for corruption, tax evasion and illicit money flows. A handful of countries, however, have managed to combine growth with a historic decline in inequality. IPS tracks the achievements of development, while closely examining obstacles to equal growth and forces driving progressive change.