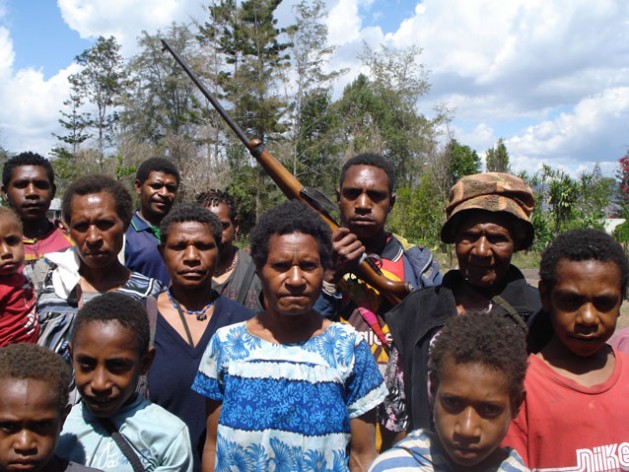 CANBERRA, Australia, Jan 29 2016 (IPS) - The Pacific Islands conjures pictures of swaying palm trees and unspoiled beaches. But, after civil wars and unrest since the 1980’s, experts in the region are clear that Pacific Islanders cannot afford to be complacent about the future, even after almost a decade of relative peace and stability. And preventing conflict goes beyond ensuring law and order.

“Research shows that the greatest predictor of future conflict is past conflict. Therefore, places such as Bougainville and New Caledonia which not only have a history of civil war, but also the presence of unaddressed potential root causes of conflict, such as extractive activities and inter-ethnic tensions…would suggest that we need to be vigilant,” she continued.

Frida Bani-Sam of the Pacific Institute of Public Policy in Vanuatu said that with rising socioeconomic inequalities being a major conflict risk, “the onus is on good leadership at the helm, leadership that can ensure economic and social stability, now and into the future.”

The most serious post-Second World War fray in the region was the decade long Bougainville civil war (1989-98) in Papua New Guinea, triggered by local grievances about inequitable benefit sharing from the foreign-owned Panguna copper mine and environmental devastation. An estimated 15,000-20,000 people or 10 per cent of the population lost their lives and infrastructure and the economy were decimated.

In the French overseas territory of New Caledonia, located southwest of Fiji, inequality and loss of land fuelled pro-independence resistance and unrest in the mid-1980s. Local expectations will intensify with referendums on independence due to be held in New Caledonia in 2018 and Bougainville by 2020.

The Solomon Islands, which neighbours Bougainville, also experienced a five-year conflict, known as the ‘Tensions’ (1998-2003), ending with a regional peacekeeping intervention. Hostilities escalated over land dispossession to internal migrants and foreign investors on Guadalcanal Island, exacerbated by lack of economic opportunities and failure of governance to address the rising violence. An estimated 50,000 people were displaced, thousands experienced human rights abuses and development plummeted.

Root causes, such as inequality, land disputes, fragile governance and youth unemployment, remain sources of tensions in the region today, according to the PIFS.

A broad section of the region’s population is affected by unemployment, but youth, who account for about 54 per cent, are particularly vulnerable. Population growth rates in small Pacific Island states far exceed their capacity to generate jobs, even for those with education, and youth unemployment ranges from 16 per cent in Samoa to 46 per cent in the Solomon Islands.

In north Bougainville, Dorcas Gano, President of the Hako Women’s Collective told IPS that “our small towns and struggling economy cannot cater to white collar employment for more than a very few.”

The collective is looking for ways to address “the need for rural employment skills or qualified training for the vast majority of youth who miss out on progressing past Grades 8 and 10. If these needs are not urgently addressed then ‘rascal-ism’ will rise and could lead to future unrest.”

Disenfranchised youth were drawn to the ‘Tensions,’ riots in the Solomon Islands capital, Honiara, in 2006 and civil unrest the same year in the Tongan capital, Nuku’alofa, when hundreds expressed anger at stalled government progress toward democracy.

But Bani-Sam emphasised that young people must be part of the solution, declaring that “youth, being the next generation of leaders, need to be empowered so they can participate meaningfully in the development conversation.”

For the vast majority of Pacific Islanders without formal employment, access to customary land is crucial for shelter, social security and subsistence and market food production. But influences such as the global cash-based economy and corruption, particularly when access to natural resources is involved, have aggravated land disputes.

“If we accept the existing [development] model which supports private property ownership and strongly links economic development to commodity extraction, then I think corruption is, of course, a problem because the money made from economic activities on land tends to not reach the customary custodians of the land, let alone the general population,” Dame Meg Taylor remarked.

Preventative approaches must include full implementation of free, informed and prior consent by traditional landowners “and by ‘full implementation’, I mean that governments must be willing to accept that some landowners may not want to consent to handing over their land,” she added.

Tackling the causes of land-related violence is a priority. The approach of the PIFS is to bridge traditional and western land management practices by, for instance, clarifying customary landowner rights and responsibilities of both governments and landowners in land dealings.

But there is also wider corruption involving politicians, public officials and organised criminals, named as a threat to development and stability during a regional security meeting in 2013.

State capture is acknowledged to have contributed to the ‘Tensions.’ A background paper commissioned by the United Nations Development Program (UNDP) reports that “national politicians were noticeably in the pocket of various Asian logging companies seeking and gaining ready access to the Solomon Islands’ forests for logging rights in return for bribes and sweeteners” and “a range of actors, including ex-militants, politicians and businessmen, benefitted financially from the violence and disorder,” which ensued.

Bani-Sam points out that climate induced migration, together with rapid population growth, could also increase pressures on land and resources and “the risk of conflict cannot be ignored.” But the risk diminishes if the resettlement of communities and relationships with host landowners are well managed, experts say.

Preventing future conflict is a priority at the regional level. The PIFS aims to improve access to justice for marginalised groups, include women in peace and security decision-making and strengthen weapons control and traditional conflict resolution processes.

This declaration also provides for rapid regional responses to crises in island states. The Biketawa Declaration has led to military and police forces as well as civilian personnel of Forum states, chiefly Australia and New Zealand, participating in regional peacekeeping and stabilization operations in Solomon Islands (2003-), Nauru (2004-2009) and Tonga (2006.)

People are taking action at the local level, too. In Bougainville, the Hako Women’s Collective works on meaningful reconciliation which is vital to rebuilding trust and conflict resilience in communities.

“We live in a very tolerant and peaceful community where everyone has chosen to live above the situation, but underneath the surface there is frozen trauma….Relatives don’t mention the mass graves in town covered by new infrastructure or the beatings and near deaths during interrogations. We are working quietly alongside other leaders to negotiate reconciliation in these matters,” Gano explained.

But going to the heart of the problem, Dame Meg Taylor believes that ensuring sustainable peace and development also depends on “a structural shift in the development paradigm.” That is, rethinking the extractive economic focus, which has failed to alleviate hardship and inequality, and seeking one that will build fair and prosperous Pacific Island societies, the best insurance against future conflict.