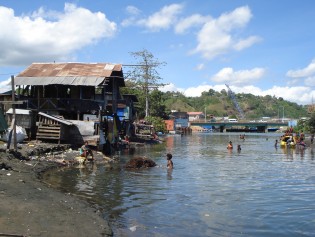 By Catherine Wilson
Natural reserves such as gold, copper, nickel, gas and timber are being extracted in the western Pacific island states of Papua New Guinea and Solomon Islands to feed the soaring economies of East and South East Asia. But despite these Pacific nations recording economic growth rates of 6-11 percent over the past seven years, opportunities for human development have not been grasped.

By Catherine Wilson
Anguish over the whereabouts of loved ones who went missing during a five-year civil conflict that ended a decade ago continues for countless families in the Solomon Islands. Searching for the remains of those who disappeared is vital to enduring peace in this culturally diverse south-west Pacific island nation of 550,000.

By Catherine Wilson
In the Solomon Islands in the south-west Pacific, where two in three of the estimated female population of 252,000 have experienced physical and sexual partner abuse, recognition is growing that ending the cycle of violence cannot be achieved without the partnership of men as catalysts of change. And initiatives by men are gaining support.

By Catherine Wilson
City and health authorities in the Solomon Islands, located in the southwest Pacific Ocean, are calling for effective and consistent urban waste management as they battle to control a serious outbreak of dengue fever, the world’s fastest spreading vector-borne viral disease, which was identified in the country in February.

By Catherine Wilson
The deceptively calm waters of Langa Langa Lagoon on the west coast of Malaita Island in the Solomon Islands is home to thousands of people who have lived on artificial islands for centuries. For generations the islanders in this south-west Pacific nation have employed tenacity and ingenuity to maintain their existence on these tiny low-lying man-made atolls, devoid of freshwater and arable land. But climate change is now the greatest threat to their survival.

By Catherine Wilson
After ten years of working towards peace and reconciliation in the Solomon Islands in the South Pacific, following a five-year civil conflict known as the ‘Tensions’ (1998-2003) which left 30,000 people displaced and hundreds unaccounted for, people now go about their daily lives in improved freedom and personal security. But below the surface, untreated post-conflict trauma continues to impact many individuals and communities.
Next Page »
ADVERTISEMENT ADVERTISEMENT