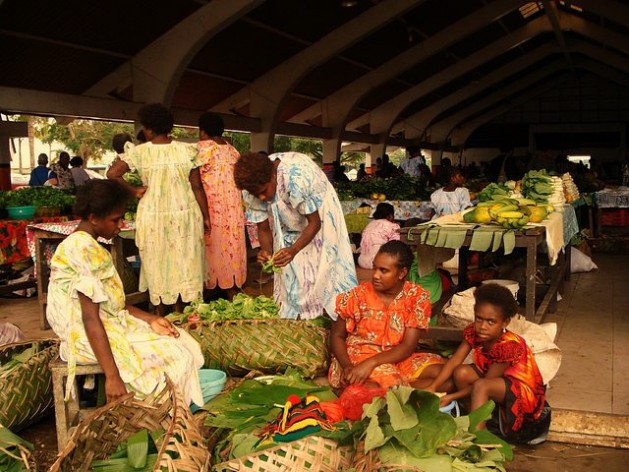 PORT VILA, Jul 10 2014 (IPS) - Populations of many Melanesian countries in the southwest Pacific Islands region are expected to double in a generation, threatening regional and national efforts to improve low economic and human development indicators.

Arnold Bani, executive director of the Vanuatu Family Health Association in the capital, Port Vila, believes that if reproductive health issues are not addressed in the next 10-15 years the result “will be a disaster for the country.”

Vanuatu, an archipelago of 82 islands located west of Fiji, has a population of 247,262 growing at 2.4 percent, compared to a global average of 1.1 percent. Similarly, the growth rate of Papua New Guinea’s population of seven million is 2.1 percent, as it is in the neighbouring Solomon Islands, home to 550,000 people.

“Mostly the extended family provides people’s basic needs and care...So if a woman makes a decision about family planning alone there will be a fight in the family.” -- Helen, a resident of Vanuatu's capital, Port Vila
As the international community prepares to mark World Population Day on Jul. 11, experts here say an important factor will be empowering women in decisions about family planning and, with a high rate of teenage pregnancies in the region, bringing about behaviour changes in the younger generation.

The task is not easy, given strong cultural and social pressures to have large families.

“Mostly the extended family provides people’s basic needs and care,” Helen (not her real name), a mother in Port Vila, where the contraceptive prevalence is 38 percent, told IPS.

“So if a woman makes a decision about family planning alone there will be a fight in the family.”

There are practical reasons for having numerous children, explained Alec Ekeroma, president of the Pacific Society for Reproductive Health in Auckland, New Zealand.

“Large families are akin to an insurance policy for family survival,” he told IPS. “More children will assist with rural subsistence livelihoods, more children means some will survive past infancy, while care for parents is seen as a duty of the children, especially in countries where there are no social services.”

But Helen said that providing for the needs of large families is a struggle in a country where the average monthly income is around 300 dollars.

The nation’s Total Fertility Rate (TFR) has decreased since the 1960s from seven to four, while in Papua New Guinea it is 3.8 and in the Solomon Islands 4.1, in contrast to a TFR of 2.1, which indicates a stable population.

Regional experts believe that contraceptive use, which ranges from 35 percent in Papua New Guinea to 22 percent in Kiribati, well below the global average for less developed countries of 56 percent, must be improved.

A report published by Reproductive Health journal last year claims that increasing contraceptive prevalence in Vanuatu to 65 percent by 2025 would create a sustainable population, reduce high risk births by 54 percent, adolescent births by 46 percent and the average number of unintended pregnancies by 68 percent from 76 to 12 per 1,000 women.

Greater contraceptive use and smaller families could also save women’s lives. There are an estimated 110 maternal deaths per 100,000 live births in Vanuatu, increasing to 120 in Tonga, 130 in Kiribati and an estimated 733 in Papua New Guinea.

Low education and the influence of traditional health healers in rural communities are also factors,Rufina Latu of the World Health Organisation (WHO) in Vanuatu added. Even when family planning is available, use can be inhibited by misconceptions, such as fear of side effects or fertility decline, religious opposition and illiteracy. A survey by the Asia South Pacific Association for Basic and Adult Education (ASPBAE) in Vanuatu’s main Shefa province estimates literacy is as low as 27 percent.

Leias Cullwick, executive director of the Vanuatu National Council of Women, said that a major concern for women is gender inequality and the norm of husbands determining the size of families. Fear of widely prevalent gender violence also impacts women’s behaviour.

“Health services data indicate that many women prefer contraception with long-acting depo-provera injections, so that their husbands would not know,” Latu added, claiming that it is not uncommon for husbands to hold the myth that their wives are having affairs if they are using contraception.

Gender inequality is also a factor in Vanuatu’s high adolescent fertility with 66 births per 1,000 women aged 15-19 years. Across the Pacific Islands, one quarter of girls in this age group enter motherhood.

The Vanuatu Ministry of Health confirmed there were national strategies to improve services to adolescents. An estimated one third of urban youth lack basic knowledge about reproductive health and many are reluctant to access reproductive health services, leading to high-risk behaviour.

Engaging young people is an urgent priority given the negative impacts of pregnancies on young girls’ lives, such as low educational attainment, poverty and maternal mortality. The risk of death for mothers aged below 15 years in low and middle-income countries is double that of more mature women, reports the United Nations Population Fund (UNFPA).

Efforts to increase understanding of population issues must include the whole community, Bani advocated, with chiefs and community leaders better informed about family planning to play a role in wider social acceptance.

Latu emphasised that population and reproductive health education for everyone needs to start in early childhood and “family life education should become a compulsory part of school curriculums at all levels.”

“A more enabling environment for women’s empowerment to develop can be better achieved if men and spouses are also engaged” in the task of social change, she added.

Cullwick suggested that male nurses in Vanuatu be trained in male-to-male advocacy about gender equality and family planning.

“With the high rate of illiteracy you cannot print and distribute leaflets, you need a man to talk to others, to generate a dialogue and make them understand what women go through,” she explained.