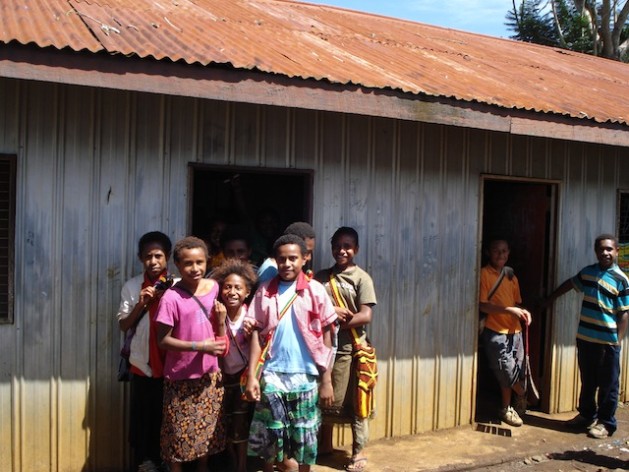 But a closer look inside the classroom, and in communities surrounding these schools, reveals a shockingly low literacy rate.

Two organisations – the Asia South Pacific Association for Basic and Adult Education (ASPBAE) and Papua New Guinean Education Advocacy Network (PEAN) – teamed up to assess the impact of formal education on people between the ages of 15 and 60 years in the Madang Province of Papua New Guinea, a southwest Pacific Island nation of just over seven million people.

“There is very little exposure to books in the home and in schools, and many children do chores to supplement family income after school, so they have no time to read." -- Lice Taufaga, lecturer at the University of the South Pacific, Fiji.
Their findings suggest that so-called strides in education have not yielded much concrete success: the literacy rate in the national languages of English and Tok Pisin was just 23 percent, with many students unable to read or write after completing primary education.

Similar findings have been reported in Melanesian countries throughout the southwest Pacific region:  in 2011, ASPBAE surveyed 1,475 people aged over 15 years in the Shefa Province of the South Pacific nation of Vanuatu, and discovered that while 85 percent declared they could read and write a simple letter in the official languages of Bislama, French or English, individual testing confirmed that only 27.6 percent were literate.

Vanuatu boasts a primary enrolment rate of 88 percent, and although 90 percent of respondents had experienced some formal education, only 40 percent completed primary school.

In the Solomon Islands, an archipelago nation located southeast of Papua New Guinea, the government has claimed remarkable recovery from a five-year-long civil war (1998-2003), with primary school enrolment at 91 percent. However, poor school facilities in rural areas and disinterest in formal learning have been cited as contributing factors to a critically low literacy rate of 17 percent.

While 97.7 percent of the 2,200 people surveyed by ASPBAE in the capital, Honiara, and in Malaita Province agreed that it was important for children to attend school, 53.8 percent of females and 37.6 percent of males, aged 15 to 19 years, were not in education.

“The issue of low literacy is prevalent mainly with those who are learning in a language other than their primary one,” Lice Taufaga, lecturer at the school of education at the University of the South Pacific, Fiji, told IPS.  “Literacy is best learnt in one’s primary language, yet most learners in South Pacific countries are expected to achieve it in English, the language of business and administration.”

Taufaga added that there were also cultural challenges, as the solitary activity of reading was not always encouraged or supported in many communal-oriented Pacific societies.

“There is very little exposure to books in the home and in schools, and many children do chores to supplement family income after school, so they have no time to read,” she said.

The linguistic diversity of the region, which contains a population of 10 million and one fifth of the world’s languages – plus European languages introduced during the colonial era – makes literacy a complex issue.

In Melanesian countries, there are hundreds of commonly used local vernacular languages, many of which are only oral. These are used by 88 percent of the population in Vanuatu, while 60 percent claim to utilise the national languages of Bislama, English or French in everyday communication.

Yet low literacy also extends to national indigenous languages, with a World Bank study last year in the Polynesian South Pacific state of Tonga concluding that only three in 10 students who had engaged with three years of primary education were able to read fluently enough in either English or Tongan to comprehend content.

More than a decade ago Pacific educationalists began rethinking the legacy of introduced western curriculums and claiming a priority for Pacific languages and cultures within the education process.  However, the reality is that a bilingual approach remains, with English and French perceived as necessary for engaging in a global world.

“The long term impacts of low literacy levels in English and French are a key concern because much of the information about development is only available in English or French, hence a higher level of literacy in these languages will enhance transfer of technology, information and knowledge at all levels of society,” Rex Horoi, director of the Foundation of the Peoples of the South Pacific told IPS, although he is supportive of translation into vernacular languages.

“It is critically important that Pacific people have direct access to information relevant for their sustainable livelihoods and improvement of life in the language they understand and communicate in…” Horoi emphasised.

Government budgets do not appear to be the main issue, although their allocation raises questions about the delivery of quality education.

According to the World Bank, 23.7 percent of Vanuatu’s government expenditure is allocated to education and this rises to 34 percent in the Solomon Islands, compared to approximately 16.1 percent in New Zealand and 13.5 percent in Australia.

However, up to 90 percent of Pacific Island education budgets are committed to teachers’ salaries, with little funds left to develop education systems, infrastructure and resources.

Inadequately qualified teachers are another issue, especially in light of evidence that only 29 percent of teachers in the Solomon Islands and 54 percent in Vanuatu are trained.

According to Taufaga, many “who are teaching English lack the proficiency to model or teach it well.”  She also pointed out that urban class sizes in the region can be as large as 40 to 50 students and most schools cannot afford suitable books for reading.

Remote students remain the most disadvantaged, with poor education facilities and lack of basic materials plaguing rural communities. In Papua New Guinea, similar to the neighbouring Solomon Islands, approximately 80 percent of schools do not have libraries.

“People keep talking about quality education,” a school graduate named Niniu Oligao told IPS in Honiara. “I believe in people reading books in order to be able to write in full sentences and be exposed to meaningful ideas.”

Oligao is so concerned about the repercussions of the absence of a library in the Takwa Community Primary and High School, an institution of 2,000 students based in the North Malaita Province, that he has taken it upon himself to build a collection of donated books. Though he has no funding, he hopes this initiative will form the beginnings of a library for students’ research.

Addressing poor literacy now is vital to improving students’ chances of completing secondary and tertiary qualifications and empowering Pacific Islanders to contribute to social and economic development, whether at the local, national or regional level.