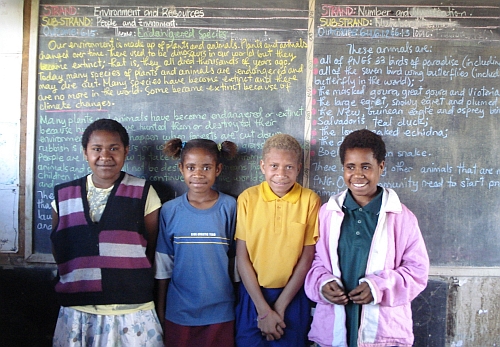 GOROKA, Papua New Guinea , Apr 29 2012 (IPS) - Sexual harassment of school-going girls is one factor that may prevent this Pacific island nation from achieving the Millennium Development Goal (MDG) of eliminating gender disparity in education by 2015.

Papua New Guinea (PNG)’s new free education policy has dramatically increased school enrolment, and a gross enrolment rate of 80 percent is within reach by 2015. But the third of the United Nations’ eight MDGs, that pertaining to girls’ education, remains elusive on current trends.

While PNG’s constitution promotes equal participation by men and women in national development, political, cultural, social and infrastructural factors inhibit retention of girls within the school system, reflecting a wider lack of women in the formal workforce, governance and decision-making roles.

The United Nations Development Programme rates the nation at 153 out of 187 countries, with a gender inequality index of 0.674. The education department reports the average educational attainment of girls is grade 10 and, for boys, grade 12, the final year of secondary school.

However, the nation’s cultural and social diversity means there is geographical variance.

In the Autonomous Region of Bougainville, where matrilineal societies are prevalent, there are 16,821 male and 16,120 female school students. In the Eastern Highlands Province, the literacy rate for males is 51 percent compared to 36.5 percent for females.

In the highlands, where most people practice subsistence agriculture and the average cash income is low, girls can be particularly disadvantaged, especially if there are no local schools.

“The (poor) state of school infrastructure, particularly in rural areas, is a significant hindrance to the achievement of equitable education outcomes,” said Arnold Kukari, leader of the universal basic education research programme at the National Research Institute.

Betty Hinamunimo, field officer with Care International, a non-government organisation (NGO) which works in partnership with the education department, said factors impeding girls’ education included “distance and cultural and social barriers, such as the fear families have of sending girls to urban centres where their safety is not guaranteed.”

Girls in PNG are at high risk of domestic and sexual violence, sexual harassment in schools, commercial exploitation and HIV, which pose serious threats to their health and education.

Ume Wainetti at the Family Sexual Violence Action Centre (FSVAC) said, “When FSVAC conducted the study on violence against children in 2005, young girls in rural schools said they get harassed by teachers and by male students, especially when they are going to school or going home.”

Wainetti said many of the young girls interviewed by FSVAC, an NGO based in the capital of Port Moresby, were already mothers.

Cultural and social barriers to education include the burden placed on girls of family care, domestic responsibilities and customary marriage, which can occur from 12 years. The International Centre for Research on Women (ICRW) estimates that a third of girls in the developing world are married before 18 years and begin child-bearing before 20 years.

Philip Afuti, president of the PNG teachers’ association, Eastern Highlands, and head teacher of North Goroka primary school, is committed to gender equality. Eighty percent of teachers are female, while the school has 630 male and 523 female students.

“We want to see the girls have an equal opportunity as boys in the education system,” Afuti declared. “They should be able to build this nation in partnership. We want to see that. PNG will only develop when both males and females are educated.”

This year, the national government rolled out a free and subsidised education policy, which has impacted female enrolment. Students attending elementary prep to grade 10 at secondary school do not have to pay tuition fees while those in grades 11 and 12 pay only 25 percent of fees.

“We have increased the numbers of females enrolling,” Afuti verified. “Some who left a few years ago have also come back.”

But there is a limit to the expansion of the education system.

“The government has taken a bold step to abolish school fees at the basic education level, thus addressing a critical access barrier, enabling more children to be enrolled and complete a full cycle of education,” Kukari explained.

“However,” Kukari said, “at this juncture, the education system does not have the absorptive capacity to accommodate all children wanting to enrol and to provide a sufficient number of teachers to ensure that children are provided with a quality education as well.”

There are also inadequate mechanisms of support for school-going girls suffering from sexual abuse. “If there are avenues for redress to such offences, these are not made known to students and parents,” Wainetti said.

“It is unfortunate that many teachers will not do anything about these abuses until the parents of the girl or boy turn up at the school to beat up the students who have been harassing their child,” Wainetti said.

The ICRW advocates that educated girls ‘who become healthy, productive and empowered adults are a force for positive social, economic and political change.”

Betty Hinamunimo agrees that, in rural communities, women working as literacy teachers are being valued more in the community and respected, and as role models they are contributing to changes in community attitudes and greater support for educating daughters.

“There is no doubt that PNG’s health, economic and social indicators will improve if there are more educated and professionally qualified women,” Kukari concurred. “They would make a very big difference in government, business, the private sector, public service and many other areas.”