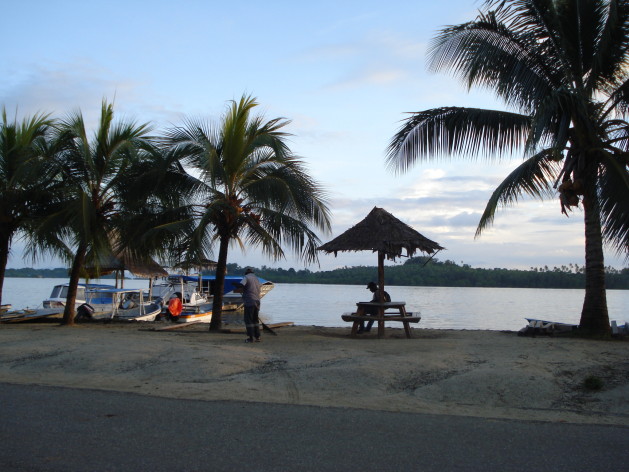 In the apparently idyllic Solomon Islands, trauma continues for many families whose loved ones went missing in the civil war. Credit: Catherine Wilson/IPS.

AUKI, Malaita Province, Solomon Islands, Nov 13 2013 (IPS) - Anguish over the whereabouts of loved ones who went missing during a five-year civil conflict that ended a decade ago continues for countless families in the Solomon Islands. Searching for the remains of those who disappeared is vital to enduring peace in this culturally diverse south-west Pacific island nation of 550,000.

“I can’t sleep, I want to know the truth because he [a man in the village] is talking to people when he is drunk and telling them that he killed them all. We don’t know. When I look into the eyes of my brother’s child, I feel very, very angry. I want the truth.”

This plea for help came from a family in a small village in Malaita Province where seven people disappeared during the war known as The Tensions (1998-2003). To this day no one knows what happened to them. But one man in the community, on occasions when he is inebriated, boasts of being the perpetrator.

“I can’t sleep, I want to know the truth because he is talking to people when he is drunk and telling them that he killed them all."

In 1998 the Guadalcanal Revolutionary Army, later the Isatabu Freedom Movement (IFM) on Guadalcanal Island began to evict migrant settlers from neighbouring Malaita Province who were perceived to be dominating access to land, resources and employment. Combat ensued as the Malaita Eagle Force (MEF) was formed to defend Malaitan interests.

The reason for these seven disappearances is confirmed. However, hearings of the Solomon Islands Truth and Reconciliation Commission (TRC) established in 2009 indicate that a significant number of abductions during hostilities occurred within the same community or indigenous group as rumour led to suspicion of individuals being collaborators or spies for rival militia groups or the enemy.

Deputy director of the Malaita Peace and Reconciliation Office, Francis Kairi, believes that many more untold stories will be revealed during the course of its outreach programmes.

Ambiguous loss, in which the whereabouts of someone is unknown and relatives experience relentless psychological stress, can significantly impede healing within post-conflict societies.

Father Sam Ata, TRC Chairman, told IPS that the endless uncertainty and trauma of these families must be addressed, otherwise projects aimed at development could become the targets of retaliation.

This year four villages in Central Malaita, home to some of the 20,000 people forcibly displaced to the province in the late 1990s as they fled evictions on Guadalcanal were destroyed by arson, with an estimated 500 people made homeless. According to Leslie Filiomea, the Anglican Church of Melanesia’s justice, reconciliation and peace co-ordinator in Malaita, ongoing untreated trauma was a major factor in the rapid escalation of small disputes in the communities into wider retribution.

Five years of armed hostilities had a severe impact on people’s lives.  An estimated maximum of 50,000 people were displaced on both sides. Guadalcanal communities fled to other areas of the island to escape bloodshed, and long established settlers from Malaita made an exodus to become refugees in their former home province.

Many of those kidnapped from their villages, places of work or from the side of the road were subjected to torture and executions. In two years of hearings from 2010-2011 the TRC received 1,413 statements of torture and 300 accounts of kidnapping and illegal detention by militia groups and security forces.

But, with no official assessment yet undertaken of the missing, the list of fatalities in the TRC’s final report is believed to be an underestimate.

“We identified 200 based on our mapping of the grave sites,” Father Ata explained. “But some of these are mass graves and there are other grave sites that we could not identify or the locals have not revealed to us.

“People don’t come forward because they fear the continuing presence of former combatants who still have weapons…to give information about missing people would jeopardise their security.”

But there is wide agreement that returning the remains of loved ones to families, one of the key recommendations of the women’s TRC submission, is imperative to addressing ambiguous loss.

“The spirit does not rest until you are buried properly,” Kairi said. “The physical beings living, too, will not rest, as well as the dead. So closure has to be achieved for the spirit of the dead and the family.”

In August 2011, the TRC began exhumations on Guadalcanal Island based on requests from families. The remains of four male victims, two from Guadalcanal and two from Malaita, were retrieved and returned to their next of kin during a national memorial service held in Honiara later that year.

Closure for these families was the culmination of long, complex and sensitive negotiations with communities, village chiefs and witnesses, and assistance by forensic experts from Argentina.

Ata is adamant that continuing the exhumation programme, despite the significant challenge of funding, and ensuring it is done in a locally appropriate way, is vital to achieving true healing in the Solomon Islands.

“We have done a lot symbolic reconciliations where the whole community comes together, but the actual process of healing is far from that,” he said, emphasising the importance of addressing individual human suffering.

The Ministry of National Unity, supported by the UN Trust Fund for Human Security, has begun creating avenues for people to share the burden of their loss. This year 200 trauma counsellors began working in communities in Malaita and Guadalcanal Provinces, including Honiara.

One outcome, Kairi believes, is that the true scale of human loss will slowly become clearer and with it the opportunity to focus on people with unresolved trauma-related needs. Only when these have been addressed can wider peace be built for both victims and perpetrators.