The Medicines Are Fake, the Illnesses Real 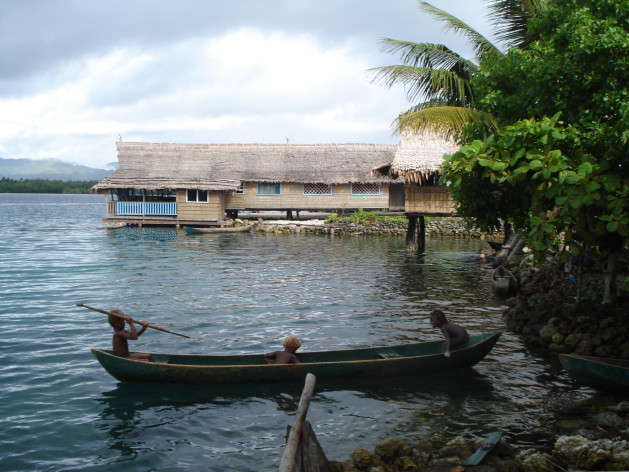 There is little oversight of the quality of medicine in remote areas such as Malaita Province in the Solomon Islands. Credit: Catherine Wilson/IPS.

SYDNEY, Sep 30 2013 (IPS) - Reports of fraudulent medicines in the south-west Pacific island states of Solomon Islands and Papua New Guinea have drawn attention to the need for more public awareness of the lethal trade and its tragic consequences.

Doreen (name changed) in the Solomon Islands, a nation of more than 900 islands and 550,000 people north-west of Fiji, had never encountered fake pharmaceutical products until five months ago when she bought a packet of anti-malarial doxycycline tablets over the counter at a city pharmacy.

There are 77 cases of malaria per 1,000 people in the Solomon Islands with approximately 40,000 infections every year. In neighbouring Papua New Guinea the rate is as high as 179 per 1,000.

The global trade in fake medicines is estimated to net international organised criminals about 75 billion dollars per year.

Doreen was told that the supply of green coloured capsules she was familiar with had run out when she questioned the mustard yellow tablets she was handed. Within five days of taking them Doreen knew something was wrong. Her kidney functions begin to fail and an acute internal blockage developed; symptoms she had never experienced before.

“It was terrifying,” she recounted to IPS, “I didn’t know what was happening or what was causing it. The pain in my lower back became excruciating.”

By the second week she realised there was a connection with the medication, and took the remaining tablets to a second pharmacy. They were found to be fake. Doreen was lucky she did not suffer permanent organ damage or worse.

The extent of fraudulent pharmaceuticals in the Melanesian islands is unknown, but the United Nations Office on Drugs and Crime (UNODC) has reported that 47 percent of anti-malarial medicines tested more widely in the South East Asian region are fake.

“Our office of regulatory affairs hasn’t received or collected any data of counterfeit anti-malarials entering the country, although a couple of months ago we received a WHO warning that counterfeit coartem (anti-malarial) is on the market,” John Tema, senior pharmacist in the ministry of health and medical services in Solomon Islands capital Honiara told IPS.

He added: “We have no proper facilities or well-established team to pick up the cases.”

In neighbouring Papua New Guinea a 2011 study of counterfeit and sub-standard medicines by Goethe University in Germany and the University of Papua New Guinea found that all 14 samples of the antibiotic amoxicillin and anti-malarial drug amodiaquine taken from five registered pharmacies in the capital Port Moresby were defective.

Ingredients in such illegally reproduced medicines can include leaded road paint, or chalk or shoe polish – and with no medicinal elements. No country is completely immune from the global trade in fake medicines which is estimated by health watchdogs to net international organised criminals about 75 billion dollars per year.

Those on low incomes in environments where pharmaceutical regulation is weak or in rural undeveloped areas where there may be medicine shortages, are inevitably more vulnerable.

“Yes, fake medicines are already an issue,” a representative of the Council of Women in the rural Solomon Islands province Malaita told IPS. “Fake medicines for malaria and yaws are common. It is a particular concern for pregnant women.”

Malaita is the most populous province in a nation where there are 0.21 doctors and 0.11 pharmacists per 1,000 people and where the majority live at subsistence level in villages with irregular transport services.

There are no pharmaceutical manufacturers in Melanesia, and access to imported medicines, even when free of charge, can be inhibited by difficult terrain, poor supply channels, and insufficient health workers and funding.

Tema acknowledged that the country has experienced difficulties in procuring anti-malarial drugs such as coartem in the last two years.

East Asia is a major producer of the world’s supplies of malaria medicines and the source of 90 percent of active ingredients. The UNODC reports that China was the origin of 60 percent of fraudulent medical products seized globally from 2008-2010.

The human cost of the illegal trade can include treatment failure, death and increased drug resistance to critical diseases.

While the Asia Pacific region has witnessed success over the past decade in reducing malaria cases and deaths by approximately 25 percent, it also has the world’s highest rates of anti-malarial drug resistance exacerbated by the circulation of fake medicines.

The vector-borne infection is a serious public health challenge across the western Pacific Islands, with pregnant women and children particularly at risk.

Tema acknowledged that “our pharmacy division does not fully control drugs entering the country, especially in the private sector,” and that there was no drug registration.

He claimed that ties are being strengthened between pharmaceutical authorities, customs and police, but legislation needed to be updated and quality control improved.

The difficulty in establishing the provenance of fraudulent medicines is compounded by the known use by counterfeiters of Internet sales and free trade zones, where products can be re-packaged or rel-labelled, disguising their true origin.

The International Medical Products Anti-Counterfeiting Taskforce (IMPACT), an initiative of the World Health Organisation (WHO), recommends that nations improve equal access to and availability of quality medicines, strengthen legislation to establish pharmaceutical fraud as a punishable crime, improve the capacity of regulatory agencies to implement oversight of importation, distribution and retail activities and expand public and media awareness of the issue.