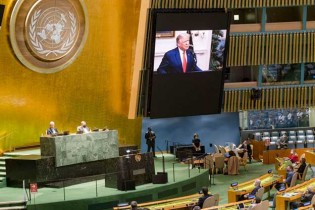 The UN Security Council is in Desperate Need of Comprehensive Reforms

By Alon Ben-Meir
Any fair analysis of the United Nations strongly suggests that the UN of today is not the same UN that was established in 1945. The United Nations Security Council in particular, which was intended to maintain international peace and security, has sadly outlived its usefulness in its current makeup.

Bennett Is Siding with the Ruthless Killer Putin

By Alon Ben-Meir
Prime Minister Bennett’s “neutrality” in the Russian war against Ukraine is outrageous and contemptable. It runs contrary to every moral principle that Israel is supposed to stand and fight for. Bennett must join the Western alliance in opposing Putin — a merciless tyrant who is committing crimes against humanity and must pay for it

By Alon Ben-Meir
It is hard to describe the excruciatingly painful destruction Putin is inflicting on Ukraine. However, whereas NATO should provide Ukraine with active defensive military equipment, it should not directly join the war which could ignite a major European if not world war.

A Rude Awakening for America and its Allies

By Alon Ben-Meir
Russia’s invasion of Ukraine was certainly not a surprise and has unambiguously exposed the West’s weakness. The question is what lesson the United States and its allies should learn from it and what measures they must now undertake to prevent Putin or any future ruthless Russian autocrat from ever daring to invade another country.

America Faces a Fateful Crossroad in 2022

By Alon Ben-Meir
When my assistant handed me copy expressing my greetings and good wishes for 2022 for approval, I paused, thinking, “is that all I can say, just hope for a better, brighter new year?”

By Alon Ben-Meir
The bombing continues unabated. The explosions are heard in the distance. A family with seven children is cowering in fear in a corner of their shack, not daring to step out, dreading instant death from shrapnel or a sniper’s bullet.

By Alon Ben-Meir
Recently I had an opportunity to brief a group of European diplomats and journalists on a variety of conflicts, with a focus on the Middle East. During the Q&A I was asked which of the region’s conflicts Biden should tackle first.