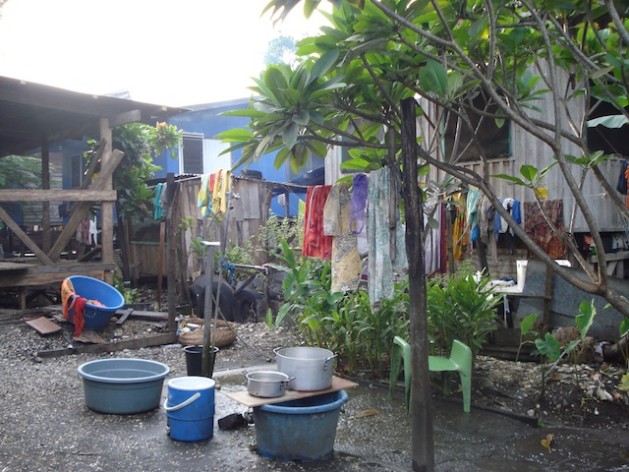 There are many demands on a communal water tap in the Lord Howe Settlement in Honiara in the Solomon Islands. Credit: Catherine Wilson/IPS.

HONIARA, Solomon Islands, Apr 8 2013 (IPS) - The Solomon Islands, a developing island nation in the south-west Pacific Islands, has one of the highest urbanisation rates in the region, and the basic service infrastructure is struggling to cater for the influx of people from the provinces to the capital, Honiara. Thirty-five percent of the city’s population, who live in informal settlements, are facing the health consequences of a dire shortage of clean water and sanitation.

Located on the main island of Guadalcanal, Honiara is a coastal city and port of 64,600 people growing at 2.7 percent a year. Thirty informal settlements in the capital are home to more than 22,500 people. Many have come for economic opportunities and better access to public services, while others were displaced during the ‘Tensions’ (1999-2003), a civil conflict between communities over access to land and resources on Guadalcanal.

Households throughout Honiara experience shortages of clean water for cooking, drinking and washing on a daily basis. But in the informal settlements a household survey has revealed that 92 percent do not have any water supply to their homes, 27 percent use communal stand taps and 20 percent collect water from wells, rivers and streams.

According to the United Nations Environment Programme (UNEP) population growth is one factor impacting the availability of fresh water in many Pacific Island nations, as it is in the Solomon Islands.

But much of the water supply and sanitation infrastructure in Honiara was seriously damaged during the ‘Tensions’ and, since then, development funding has prioritised peace and reconciliation, law and justice, governance and economic development.

A spokesperson for the Solomon Islands Water Authority (SIWA), which is responsible for the urban water supply, explained to IPS that the “current (water supply) network is not able to supply the water demand due to pipe restrictions and the limited and aged pipe network cannot meet the demand of the rapidly expanding population in Honiara.”  Thus regular water shortages result when “rationing of water has to be implemented to ensure that everyone has access to water.”

However, in squatter settlements most people live without piped water.

Water for washing and bathing is from the well,” Alison, a resident of Henderson Settlement, home to 3,000 people on the urban outskirts told IPS. “But we have to go far to look for our water for drinking and cooking. We just look for where people have tanks and then ask them if they will allow us to use some of their tank water.”

The community has access to one communal tap for every three to four families which provides town supplied water during certain hours of the day,” Father Muliava, the local pastor said. “But there are days when the tap is dry and there is no water. We store water in plastic containers and try and manage the supply.”

The state of sanitation is equally critical. “There are about three houses here which have proper sanitation, but most people use the nearby beach, even though it is not safe to use at night,” Father Muliava said.

At Henderson, Ruth and her husband have access to a pit toilet. But she told IPS:  “We cannot use the toilet during the day. It is an open toilet and the other families sit around, so there is no privacy.”

One outcome is regular cases of dysentery, diarrhoea and cholera. According to UNEP, 10 percent of all fatalities of children under five years throughout the Pacific Islands are caused by diarrhoea related diseases. In the Solomon Islands it is 8 percent.

At Henderson, Alison recounted: “I was admitted recently to hospital after I suffered a miscarriage. I didn’t use proper water and developed an infection and became ill. The doctor said I need access to clean water.”

“My little child has skin rashes all over her body from the water,” she added.

Water and sanitation deprivation has also been linked to violence against women, according to a 2011 Amnesty International report.

Women and girls are vulnerable to rape and sexual harassment when they have no option but to walk considerable distances unaccompanied, in some cases round trips of three to six kilometres per day to collect water, use water sources for bathing or when there are only exposed places available for sanitation purposes.

The government introduced a national policy to combat violence against women in 2010. But gender violence remains a concern with the Solomon Islands Family Health and Safety Study confirming that 64 percent of women aged 15-49 years, who have been in relationships, experience some form of domestic abuse.

“If there is no water available, men harass women because it is the role of the woman to go and find water,” Ruth said.

A current project being conducted in collaboration with the Japan International Co-operation Agency (JICA) is creating 16 new bore holes which will lead to a future increase in the city’s water supply capacity.

The Honiara City Council only provides services to communities that fall within the city’s boundary, but has a long-term strategy to eventually incorporate many of the informal settlements into its urban plan. A spokesperson told IPS that the council had constrained resources, but was subsidising the manufacture of latrines, which are available to people in Honiara and the settlements at reduced cost, monitoring sanitation usage and implementing community awareness of sanitation and health issues.

A spokesperson for local women’s organisation, Vois Blong Mere (Voice of Women), commented that the problems faced by women in the settlements will only diminish when basic services are improved, emphasising that women must be empowered to be involved in the decisions made about the health and safety issues impacting their lives.