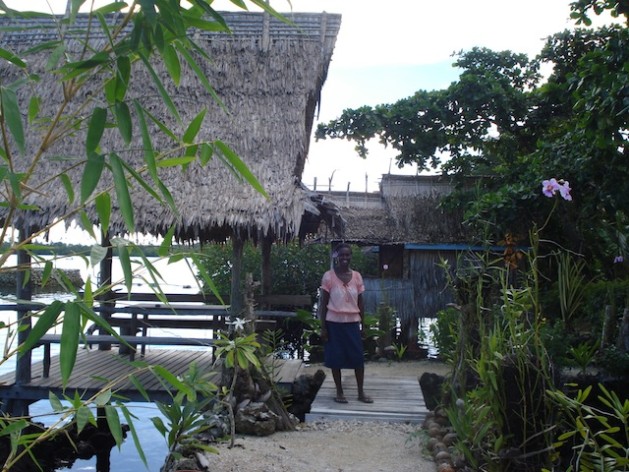 AUKI, Solomon Islands, Jun 1 2013 (IPS) - Forty-five-year-old Serah Kei began building her artificial island and eco-lodge resort 26 years ago in Langa Langa Lagoon, located on the Solomon Island’s Malaita Province, about four hours by boat from the nation’s capital, Honiara. Kei, a single mother, paid for the construction by undertaking the laborious task of making and selling ‘shell money’ and finally opened Serah’s Lagoon Hideaway, which accommodates up to twelve visitors, in 2006.

Although it has been a decade since the five-year civil war in this south-west Pacific nation ended, many provincial areas still lack adequate infrastructure, public services and sustainable economic opportunities.

Undeterred by the slow return of international tourist confidence, a growing number of grassroots communities are turning to ecotourism in the hopes of boosting local livelihoods in this country of 552,000 people spread across 900 islands.

“One good thing about tourism is that everybody in the village is getting something out of it,” Kei explained to IPS. Her extended community reside on some of the other twelve artificial islands built on coral, sand and stones in this 21-kilometre lagoon, devoid of fresh water, on the west coast of Malaita Island.

Guests who arrive from the mainland by canoe stay in traditional thatched bungalows overlooking the water. Visitors can engage with the surrounding natural beauty and culture through snorkelling, canoeing, performances of indigenous panpipe music and opportunities to learn about traditional shell money manufacture, local boatbuilding and village life.

A short distance away from Kei’s eco-lodge, Busu Island Village Stay offers a similar experience.  Seven years ago, these were the only two local tourism operators, but today another seven potential eco-friendly resorts are being developed in the area.

“(Increased) interest in ecotourism is quite new,” Longden Manedika, director of the Solomon Islands Development Trust (SIDT) in Honiara, told IPS. “It is a growing phenomenon right across the country.  Even in Makira Province, where transport services can be unreliable, people are developing tourism sites.”

According to the United Nations World Tourism Organisation (UNWTO), the industry has expanded globally in recent years, with developing countries attracting 46 percent of total international visitors in 2011. In 20 of the world’s 48 Least Developed Countries (LDCs) tourism is the first or second source of export earnings.

The mountains of Guadalcanal Province offer serious trekking, while the world’s largest tropical coastal lagoon, Marovo Lagoon, located in Western Province, is home to 16 locally run lodges close to spectacular coral reefs. The easternmost province of Temotu offers remote diving, while Polynesian culture can be experienced on the islands of Rennell and Bellona.

The government remains verbally supportive of tourism, especially as the unsustainable logging industry, beleaguered by corruption, is predicted to collapse by next year.  However, investment in its fledgling infrastructure is yet to follow.

Challenges include developing reliable transport services from the capital, Honiara, to outlying islands and a sufficient trained workforce. In a 2008 survey by the Solomon Islands Chamber of Commerce and Industry (SICCI), 13 of 17 tourist operators wanted to see greater investment in air services and infrastructure.

General Manager of the Solomon Islands Visitors Bureau, Michael Tokuru, told IPS that the government had begun upgrading two provincial airports at Gizo and Munda in Western Province, but said that broader infrastructure concerns had to be addressed by cross-sector strategies involving different ministries.

“At the moment the government is focused on fishing, mining, agriculture and forestry, so tourism is not a top priority,” he added.

Addressing visitor confidence is another hurdle.

Serah’s Lagoon Hideaway attracted 24 guests in 2011 and 14 last year from Australia, New Zealand, the United States and Europe, but Kei says this is not enough.

While international visitors to the Solomon Islands increased from 4,000 in 2002 to 22,000 last year, more than 50 percent have been business arrivals.

Tokuru believes the negative impact of the conflict, known as the ‘Tensions’ (1998-2003), as well as riots in Honiara in 2006, are still influencing the international community’s perception of security in the country, even though the withdrawal of the military contingent of the Regional Assistance Mission to the Solomon Islands (RAMSI) this year represents a milestone in the restoration of peace.

The growth of ecotourism could be an avenue to poverty alleviation, if managed wisely, by providing direct economic benefits to rural communities. The Solomon Islands, one of the world’s LDCs, is ranked 142 out of 187 countries for development, while 23 percent of people live below the poverty line.

Fifty-two percent of community respondents in the SICCI study had a high opinion of tourism, with 67 percent of those attracted to industry employment wanting to gain new skills. There was a clear community preference for small scale, locally managed sites, with 60 percent favouring the construction of traditional ‘village stay’ accommodation, in contrast to 20 percent who nominated large hotels.

“My people are happy to have tourism because we have very little to live on and many live day by day,” Kei said. “We live on man-made islands and have no land to cultivate for an income.”

She added a further benefit was that ecotourism activities supported the preservation of local knowledge for the next generation and created incentives for conserving the environment.

But the SIDT points out that the possible negative footprint of tourism also needs to be addressed through increased local education and awareness.

Ultimately, he believes that rural people must be fully informed about their responsibilities, their rights and ownership over land and resources. Communities should also be adequately prepared before engaging in enterprises by reaching a consensus on which aspects of environment and culture they need to protect.