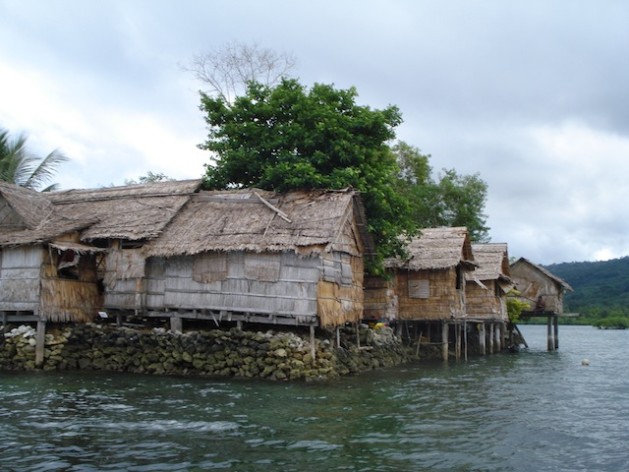 AUKI, Malaita Province, Solomon Islands, Apr 30 2013 (IPS) - The deceptively calm waters of Langa Langa Lagoon on the west coast of Malaita Island in the Solomon Islands is home to thousands of people who have lived on artificial islands for centuries. For generations the islanders in this south-west Pacific nation have employed tenacity and ingenuity to maintain their existence on these tiny low-lying man-made atolls, devoid of freshwater and arable land. But climate change is now the greatest threat to their survival.

“The seas are rough and the tides are getting higher. Sometimes the waves come right across the island during the wet season,” Alphonsus Waleronoa said on Raolo Island, which has a total area of about 100 square metres.

Waleronoa is sitting on a bench under the eaves of his traditional dwelling perched on the island’s perimeter, with two of its timber foundation poles planted in the lagoon’s waters and the other two on the island.

There are about half a dozen homes here for the five families, about 26 people, who live on Raolo which was built on a foundation of coral, stones and sand by Waleronoa’s father after a cyclone destroyed their previous home, another artificial island called Rarata, in 1945.  Further cyclones in the late 1960s prompted the small community to move temporarily to Malaita Island, but they returned over ten years ago to flee fighting during the civil war, known as the ‘Tensions’ (1998-2003).

The Solomon Islands is an archipelago of more than 900 islands east of Papua New Guinea with the majority of the population residing close to the nation’s 4,023 km of coastline. Natural disasters are a high risk especially during the wet season from November to April when tropical cyclones, tsunamis and gale force winds can generate floods and destruction.

The sea level near the Solomon Islands has risen by 8 mm per year since 1993, compared to the global average of 2.8-3.6mm, according to the Pacific Climate Change Science Programme. The prediction is that by 2030 the sea could rise by a maximum of 15 cm, the average wind speed of cyclones could increase by up to 11 percent and associated rainfall intensity by 20 percent.

Caspar Supa, coordinator of the Pacific Adaptation to Climate Change Programme (PACC) in the country told IPS that places on the frontline were the artificial islands, low-lying atolls and the low-lying areas of larger islands where “there is low food security, lack of development, small resources and limited education about climate change.”

In spite of the tradition of oral history many, including Waleronoa, do not know the exact reason their ancestors created these unique environments, where communities are renowned for fishing, shipbuilding and traditional ‘shell money’ manufacture, but some believe it could have been the consequence of disagreements or estrangement from mainland villages.

Thomas Dakero’s ancestors migrated from the West Kwaio region of Malaita Island to the half-natural, half-artificial Busu Island 500 years ago. Busu, which is about a kilometre long, is home to a growing population of 300 people.

Dakero now witnesses high tides occurring almost every month when waves can flood most of the island. There is a mangrove forest on one side, which offers some protection against the sea, but this is also under threat.

“I have been telling the people not to chop down the mangroves, but we need the firewood for cooking,” Dakero said. “In the past we used the dead and dried mangrove wood, but because of population growth we now need to cut the trees.”

Daily life has many other challenges. There isn’t any natural fresh water supply on Raolo and Busu Islands and the ground is unsuitable for agriculture. Busu Islanders collect rainwater in tanks, but during the dry season they make the boat journey to the mainland several times per week to collect supplies in plastic containers.

“We want to stay on our island,” Waleronoa told IPS. “We have been fishermen for generations. We sell fish at the markets and this is the only income we have, so we would find it hard to move.”

Fishing is an important source of subsistence and cash income for many Solomon Islanders, but last year’s State of the Coral Triangle Report identified destructive fishing as an issue in Langa Langa Lagoon.

Dakero says the fisheries have been impacted by a number of local fishermen using dynamite. To try and boost their recovery, he has planted live coral in the waters surrounding Busu Island to create a fish breeding ground.

But the future for artificial islanders is uncertain. “We are trying to build the island higher and grow mangroves on one side,” Waleronoa said on Raolo Island.

Dakero is also considering increasing the height of Busu Island, but emphasised it was very expensive to buy large quantities of stone from landowners on the mainland and transport to the island.

The Malaita Provincial Government is already planning for the potential relocation of communities from two Polynesian atolls, Ontong Java and Sikaina Island, where food and water security is deteriorating.

“The first stage is that we are consulting with the affected communities about future relocation,” Augustine Faliomea, deputy provincial secretary of the Malaita Provincial Government told IPS.

“They will be able to choose where they relocate on Malaita Island. Then we will negotiate with the current landowners in those places to purchase land for resettlement.”

More than 80 percent of land in the Solomon Islands is under customary landownership, which is predicted to be a significant challenge to some climate change adaptation projects. Land has immense significance to Melanesian culture, identity and the security of livelihoods for successive generations of extended families. Therefore acquisition by non-traditional owners can be a difficult and prolonged process.

Faliomea added that the implementation of migration programmes, which still require funding, will trigger huge changes to the lives of islanders, who will have to adapt to new cultures, environments, foods and diets.