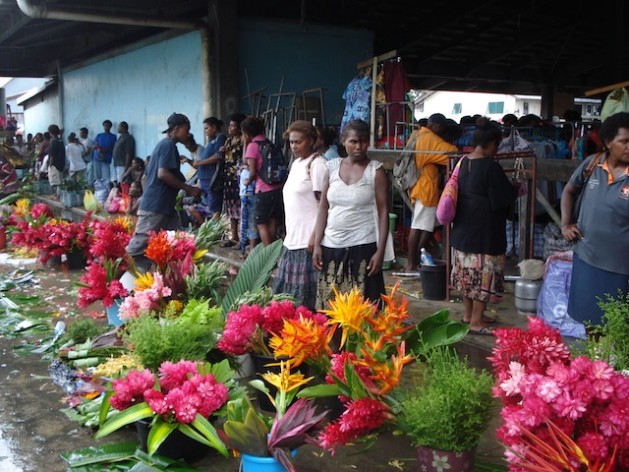 HONIARA, Solomon Islands, Mar 30 2013 (IPS) - In Honiara, capital of the Solomon Islands in the South Pacific, women are taking the lead in developing a burgeoning floriculture industry. At the same time, their enterprise is contributing to community resilience as rapid urbanisation exceeds employment opportunities and challenges the economic wellbeing of many urban families.

“I always have flowers around my house and I decided it was a good idea to grow them to sell at the market,” Patricia Rahiva, a flower grower at Honiara’s central market told IPS. “I have six children and this is an important income which pays for food, clothes and school fees.”

Situated on the main island Guadalcanal, Honiara is attracting an influx of people from the surrounding archipelago of more than 900 islands which make up the Melanesian country. Located east of Papua New Guinea and northeast of Australia, the Solomon Islands have a population of 552,000 and a national urban growth rate of 4.7 percent. Honiara’s population of 64,600 is growing at 2.7 percent with only a quarter of residents working in the formal sector.

Women play a major role in rural agricultural production in a nation where 80 percent of people are engaged in subsistence agriculture and cash cropping. But in the capital they comprise 44 percent of the unemployed.

While flowers are a familiar sight in villages, homes and household plots, their commercial production, notably by smallholders, has only developed since a five-year civil war fought over the access of communities to land and resources on Guadalcanal ended in 2003.

Located just south of the equator, the country has a year-round tropical climate, and its rainforest covered islands feature more than 200 species of tropical flora.

Freda Delight, vice-president of the Floriculture Solomon Islands Association, which has a membership primarily of women based in the Honiara area, claims “the public interest has grown in buying flowers and the growers are also increasing in numbers.”

Floriculture is well suited to communities with limited resources as it can be accommodated on small areas of land and does not require large capital investment. Women have quickly found new income by adapting their household gardens to the small-scale growing of tropical flowers, potted plants and orchids.

Rahiva grows heliconias, gingers, honeycomb flowers and wild flowers, and makes a variety of bouquets, which she sells alongside her cut flowers.

More than 500 households are known to be engaged in commercial floriculture, and in 2006 the Honiara City Council allocated a specific space at the town’s central market where growers supply a consistent range of flora throughout the year.

“People from churches, businesses and hotels buy my flowers and some place special orders,” Rahiva said.

Some of the challenges she faces include accessing and buying materials to make floral arrangements, and meeting the fees for securing market spaces and attending training workshops. Delight added that “women often live far from the market and transportation is also one of the challenges as well as lack of storage or cool rooms.”

Grower Hilda Atorea said: “Some of the cut flowers need special conditions, 70-80 percent shade. We have very hot temperatures here in the Solomon Islands and sometimes the rain is too heavy and damages the flowers. Lots of growers need green net or shade cloth and some of them can’t afford it.”

Wendy Kanai, chief executive officer of the Solomon Islands Women in Business Association (SIWIBA), said there was huge interest among women in setting up small businesses, and the organisation’s membership had grown to more than 1,000 in the past year.

“Women need more places to sell their products,” she told IPS in Honiara.

Floriculture is yet to be incorporated into the strategic policies and programmes of the Ministry of Agriculture. However, Lily Wame, chief field officer in the ministry’s women in agriculture office told IPS that “women are already benefitting from the income they get from cut flowers and ornamental plants” and she was “promoting the need for the ministry to get involved.”

At present her office has supplied some seedlings and potted plants to growers as part of a project on women’s livelihoods, and plans to “offer training in post-harvesting, pests and diseases and production to women in the future.”

The logging industry, which boosted national economic growth in the Solomon Islands during the last decade, is now in rapid decline, and revenues have not translated into improvements in the standard of living for the majority of the population. The World Bank predicts that developing the smallholder agriculture sector will be vital to protect local livelihoods in the coming years.