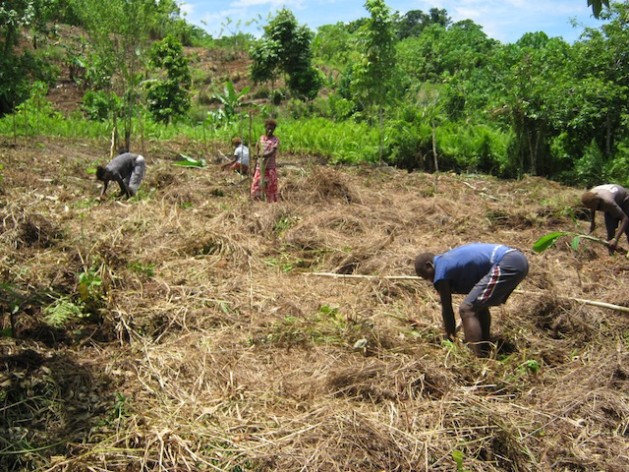 Farmers on the Weather Coast of Guadalcanal in the Solomon Islands. Credit: Kastom Gaden Association (KGA)

HONIARA, Solomon Islands, May 7 2013 (IPS) - Life is difficult enough for communities on the remote southern Weather Coast of Guadalcanal in the Solomon Islands.  Sustaining a livelihood from the land is a daily struggle on the steep coastal mountain slopes that plunge to the sea, made worse by the absence of adequate roads, transport and government services. And now, climate change is taking its toll on the already precarious food situation here.

“From mid-March to June it is always raining and whatever crops we grow will not go to harvest,” Alice, a member of a farming family on the Weather Coast, told IPS, referring to the period locals here call “time hungry”.

During these months, most meals consist of rice and one or two other items procured from the shops in the city of Honiara, the capital of this nation comprising more than 900 islands located northeast of Australia and east of Papua New Guinea.

Stretching for 160 kilometres, this island, the largest in the Solomon Islands archipelago, has a widely dispersed population. Located on the northern coast and home to 64,600 people, Honiara is separated by high mountains from isolated villages on the southern coast, where the total population is more than 19,000.

The climate here is hot and humid all year round and people are vulnerable to cyclones, gale force winds and flooding during the wet season, as well as earthquakes and landslides due to the country’s proximity to the highly seismic Pacific Rim of Fire.

Scientists are now predicting the weather extremes that batter this rugged coast will only get worse as the nation faces the full force of climate change.

The sea level near the Solomon Islands has been rising by eight millimetres per year compared to the global average of 2.8 to 3.6 mm, according to the Pacific Climate Change Science Programme.  During the first half of this century, average annual and extreme rainfall is predicted to increase, along with the intensity of cyclones.

Climate change is the greatest challenge to sustainable development in this South Pacific nation, imperilling the food security of 85 percent of the population who depend on subsistence agriculture. In terms of development, the Solomon Islands is ranked 142 out of 187 countries by the United Nations Development Programme (UNDP) and has the second lowest average per capita income in the Pacific region, while 23 percent of the population lives below the poverty line.

Residents of Weather Coast villages like Duidui, Reavu and Avuavu use the steep slopes above the coastline to cultivate crops, growing everything from taro, yams and sweet potatoes to cassava and bananas. This region receives heavy rainfall of 5,000 to 8,000 mm a year during two wet seasons, the first from January to April, the second from May to September.

Boku Joke, a climate change advisor working with the non-profit Kastom Gaden Association (KGA), told IPS that resulting floods and intense saturation of the soil has made life difficult for farmers and threatened food production.

“Rain and floods and lack of crop bulking (mass cultivation and storage of different crop varieties) by local farmers have also resulted in a loss of crop diversity,” Joke said, explaining that since farmers plant just one crop, they are often left with nothing if extreme weather ruins the harvest.

Varieties of taro and yam were also lost when food gardens were abandoned and pests and diseases proliferated during the “Tensions” (1998 to 2003), a civil conflict in the Solomon Islands that left hundreds dead and 35,000 displaced when grievances among the indigenous Gwales of the main island, Guadalcanal, led them to fight the influx of numbers of migrants from Malaita, a heavily populated island to the east.

The presence of armed members of the Guadalcanal Liberation Front (GLF) on the Weather Coast forced villagers to flee into the bush for up to two years.

The government now recognises the need to focus investment on developing and supporting agricultural livelihoods to ensure a secure future for people in the region.

“Food and agricultural production has been and will continue to be the most important source of economic development and income generation as well as food security for these communities, given their geographical remoteness,” Hezekiah Valimana, chief field officer at the ministry of agriculture’s Guadalcanal office, told IPS.  Agriculture accounts for 38 percent of the nation’s gross domestic product (GDP) and 75 percent of the labour force.

Agriculture will also be critical to enduring peace and stability in this part of the country as a history of poor access to development, basic services and income opportunities in rural and remote areas contributed to the grievances that triggered the conflict more than a decade ago.

“An increase in food and cash crop production will help to improve the livelihoods of families and provide cash incomes,” Valimana said.  Most residents here are subsistence farmers and the average cash income of households in the region can be as little as 13 dollars per month.

In recognition of the environmental challenges ahead, the government launched its first National Climate Change Policy last year to improve the coordination of adaptation efforts by various government ministries and national institutions.

The KGA, which works alongside the ministry of agriculture, as well as the ministry of health and the ministry of environment and conservation, has made rural communities a priority, and is working to deliver new technologies to improve farm management and productivity, as well as planting materials to 25 percent of rural households in the Solomon Islands.

“We need new or more climate resistant crops,” Alice confirmed.  “But we also need more education and training about how to cultivate bush foods such as breadfruit and nuts and preserve them for eating and selling.  At the moment, most people don’t see these as useful or commercial foods.”